Home News and Editorial 11 weeks of Android: New Nearby sharing feature shown off by Google 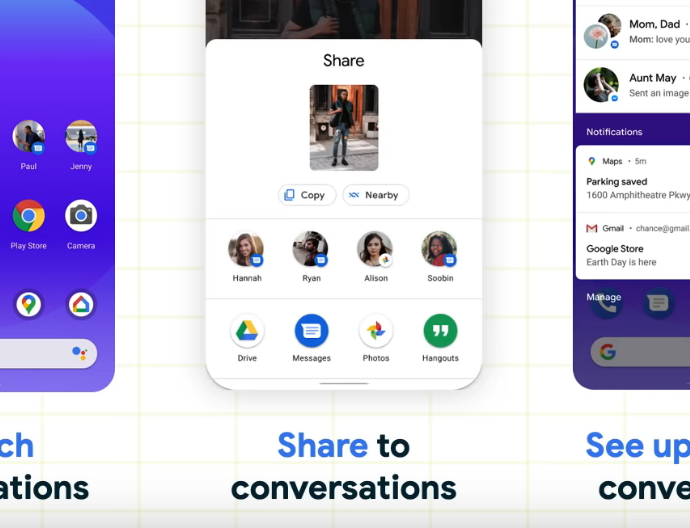 Google, like so many companies, have had their plans for 2020 thrown into total disarray and instead of showing off everything at Google I/O they have had to find new ways to share with users and developers the new features coming to Android. Today they have kicked off a new series, “11 weeks of Android” with a “People and Identity” focus.

This week’s focus is on making Android “more people-centric and expressive” with a goal to prioritise the most important people in your life. One of the features Google is focusing on is connecting people with Nearby Sharing — a feature we saw leaked earlier this year. Today as part of the 11 weeks of Android we have seen Google show it off in a YouTube video targeted at developers.

While the new sharing feature is only shown off in passing and not made a focus of the video titled “Conversation notifications: New features & best practices”. It seems that “Nearby” (or Nearby Sharing?) will be part of a new focus on the sharing menu and the goal of making sharing with friends and family much easier.

As you can see in the mockup above a Nearby button appears next to the copy button making it front and centre of the new sharing focus we expect to see in Android 11. Aside from this focus the video shows off how all apps and conversations within them can support the new Bubbles API. It is unclear just when we will see the new Nearby Sharing feature arrive but expect it to arrive in one of the upcoming beta updates. It is about time Google did something to rival Air Drop in iOS. Hopefully it will be a staple of Android as we have already seen some of the world’s biggest manufacturers team up to make their own nearby sharing feature with more joining this alliance as time goes on.

Hopefully we can have both because more fragmentation is something Android does not need.