Keeping a new device under wraps is near impossible these days and once again that has been proven to be true for OnePlus’ upcoming mid-range smartphone, the OnePlus Nord. Although OnePlus have not made it any secret that it is coming but they have not revealed the actual phone just yet. Lucky (or unlucky) we have leakers for that.

Evan Blass is once again back to his old tricks and has revealed press renders with cases along with a slide showing off the specs of the upcoming mid-range device from OnePlus.

Over on Evan’s Patreon account he has shared images of the Nord with cases included. The case leaks show off a quad rear camera set up which the makeup of is unknown at this stage. It is expected, according to the specs leak below, to house a 48MP main Sony IMX 586lens along with an 8MP ultrawide lens, a 5MP depth sensor and a 2MP macro lens.

The front of the device shows off the dual selfie cameras which to us look extremely similar to the realme X3 SuperZoom. The X3 SuperZoom sits in the mid-range here in Australia with some decent specs — something we expect OnePlus to bring inside the Nord so it would not surprise us if it was a very similar build and design. The front-facing camera will apparently be made up of a 32MP main lens and an 8MP wide-angled lens.

Three of the cases shown are colourful cases, just like the collab cases they launched with the OnePlus 8 Pro but this time there are multiple collab cases by Camilla Engstrom, Finsta and @ZacksJerryRig. The ZacksJerryRig case shows off the internals of the device as if it had been torn down by him — I dare say this will be a favourite among many users. According to 9to5Google the JerryRigEverything cases has a QR code that opens up a “music video for late-90s Eurodance hit “Blue” from Eiffel65” — clever.

Said by a tipster to come from a virtual Nord training presentation, this lines up quite well with what we already know (save for the phone imagery, which is an obvious placeholder). Let the debunking begin! pic.twitter.com/pA5N4oxJOF

Over on Twitter Evan has also released a screenshot showing the specs for the OnePlus Nord. The specs, as you can see below include an in-display fingerprint sensor, a 6.44-inch 1080P AMOLED display, a Snapdragon 765G chipset, 8/12GB of RAM options, 128/256GB storage options along with a 4,115mAh battery. 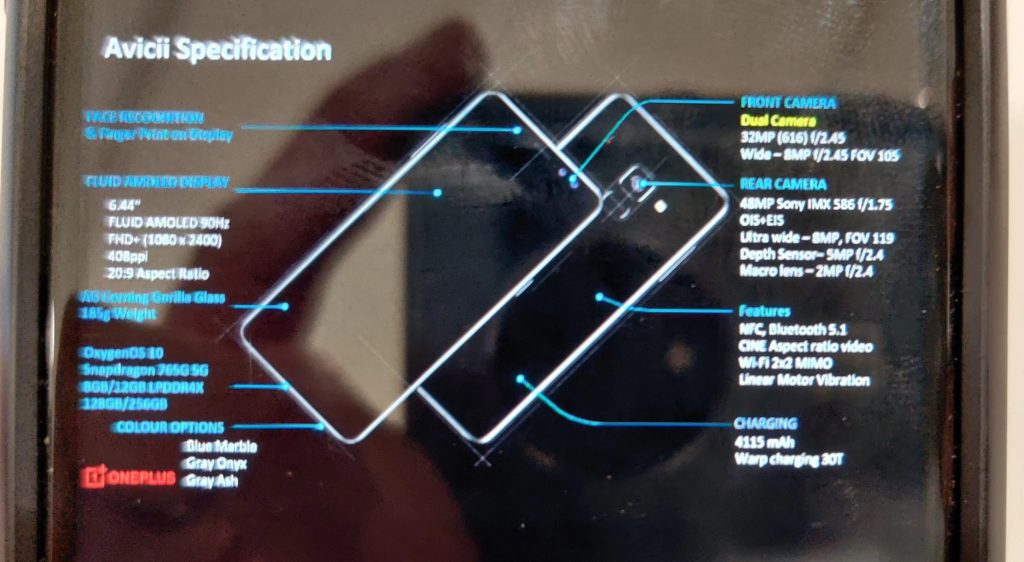 The OnePlus Nord is expected to be revealed in an AR event on July 21 and will launch in Blue Marble, Grey Onxy and Grey Ash colours in India and Europe, with more locations to follow in the coming months.

Those of you after a mind-range OnePlus device keep your eyes peeled for third party importers bringing this one into the country — although for a mid-range it may well be worth just looking locally at the myriad of options we already have here with local warranty and support.

I will admit, I do like the style of that ‘internal circuitry’ phone protector case. It’d be nice to be able to get that style case for other devices.