This morning Google finally announced the availability of their latest Pixel Buds to the Australian market. There are a lot of players in the true wireless earbud market so it will be interesting to see how Google’s offering compares.

We’ve had them in our hands for a very short time so this is a preliminary review, a quick hands on and let’s be honest, how long does it take to review earbuds? How do they fit? How do they sound? What is the battery life like? What are the features that make it stand out? Let’s get stuck into these without any more preamble. The fit of the new Pixel Buds is similar to most other true wireless earbuds. The wing or stabiliser arc as Google are calling it slides forwards into the ear to secure them. While there is only one size wing within the box Google have provided a couple of spare tip sizes to get the best fit possible. 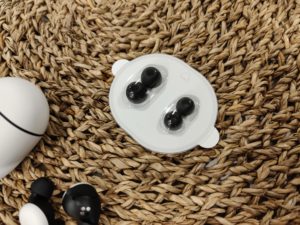 Within the ear they sit comfortably and even with the wing do not feel entirely comfortable — this is most likely due to being used to my JBL Reflect Flow earbuds which fit extremely tightly into the ear hole. In saying that I was able to perform a workout (albeit in the garage due to lockdown measures here in Melbourne) and some serious cross trainer interval training without having them become dislodged at all.

I wore the Pixel Buds for four hours straight and they were as comfortable at the end as they were at the start. Similar to the Jabra true wireless who also only seem to sit in the outside of the ear they are comfortable for long listening sessions.

The Pixel Buds also sit fairly flush with the ears so that putting on or taking off of clothes does not dislodge them from your ears.

What about the sound?

As I sit here listening to some old school Eminem, DMX and Obie Trice my wife is next door watching the show designed to drain every last ounce of intelligence from you (Big Brother) and my IQ has remained steady throughout. Yes, although the Pixel Buds lack any sort of noice cancellation and the fit in the ear is not designed entirely for noise isolation either, I was able to hear the music only. So how did this music sound? The music was crisp and clear and as with so many, if not all, true wireless earbuds, lacked in the lower end. The bass, although there, is nowhere near as good as a big set of cans but that is something you should not expect from any true wireless earbuds. The sound though was as crisp as any others I have tried although at times the upper end seemed to be a tad over-emphasised and over-powering.

With all types of music tested they sounded good and definitely up to par, as long as you are willing to forgo any overbearing bass sounds — and much better than some offerings currently on the market.

What about the battery life?

So many of Google’s products lack a decent battery life — well the smartphones do. The battery life of the Pixel Buds is rated to five hours per earbud and then another 24 hours of charge within the charging case.

After setup and using the Pixel Buds constantly for over five hours before the right one ran flat. Luckily some of that time was with the left one out of my ear so the left one took over while I quick charged the right earbud. Bluetooth 5.0 allows you to use either earbud if opting for a single earbud use.

The charging case can be charged two ways — USB-C and Qi charging. The Qi charging does not seem to be exceedingly quick but the battery inside is not huge and thus does not take long to charge fully anyway. USB-C is also an easy option and much faster. 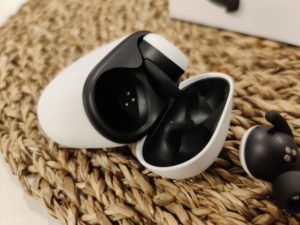 What’s so special about the Google Pixel Buds this year?

Setup is a breeze
You could be mistaken for thinking that a true wireless earbud is a true wireless earbud. This is no ordinary earbud. Right from the get go when you open the charging case and remove one of the earbuds you will automatically get a prompt to connect the Pixel Buds — and that is even if you don’t have a Pixel smartphone. I currently use a OPPO Find X2 Pro (Lamborghini version — flex) and received the prompt straight away.

The touch panels are incredibly sensitive and easy to use. No longer do you have to press firmly on a hardware button that seems to push the earbud into the middle of your brain. Sliding forwards or backwards on the earbud adjusts the volume up or down and there are various functions for single, double and triple taps as well. Tap and hold activates Google Assistant but you don’t have to sue that as they are incredibly sensitive at picking up the OK Google hotword.

Hey Google, help me speak Vietnamese
Google promised real time translation with the second generation Pixel Buds and while it has translation that worked well I’m not sure I’d call it real time. You ask Google to help you speak a certain language which then opens the Google Translate app on your phone. Then you tap and hold on either earbud and say what you want translated.

This will be fed into the app which will translate it and read it out for the other person. Tap on the microphone and their response will be recorded and translated to English (or whatever your source language is) which is then read into your Pixel Buds. I tested out this feature on Vietnamese and Cantonese languages with more success with Vietnamese.

Translation is difficult at times, especially with Cantonese, as there are words which are the same but have different meanings when used in different contexts. Google struggled to pick up that context a couple of times.

I was able to successfully order a couple of beers in both languages though so that should see you through a couple of weeks in each country.

The design is pure Google and the experience is like a Pixel smartphone experience. Simple, easy to use with a high quality. Just like the Google Pixel smartphones, the Pixel Buds may not be the best sounding true wireless earbuds around but they provide a seamless experience for Android users.

The fit is solid while not being uncomfortable and the design is sleek and far from clunky. Google have added some nice features to these Pixel Buds and although I would like them to provide actual real time translation of languages without the use of the phone’s display the are still extremely useful. The Google Pixel Buds are available in Clearly White only (it is unclear if other colours will arrive here in the future) and at this stage only from the Google Store. They are not cheap and will set you back AU$279. At that price it is worth looking at other options before you pull the trigger.

In the end the design and ease of use along with decent sound quality and some handy features make them a compelling consideration for your hard earned money. Although we have only used them for a short period of time we are comfortable recommending them as a reliable product which will most likely see a lot of new features arriving in future updates.

We will circle around and update our review in a few weeks time when we’ve had time to delve deeper into their functionality and see how they settle in.

In this day and age of the pandemic it seems prudent not to share earwax.

Correction – you were translating to Mandarin, not Cantonese. Both the Traditional and Simplified Chinese options have Mandarin pronunciation, Cantonese has been a bit of a glaring omission from Google Translate for some time now.

Mine arrived 1 day after availability, and they replace my Jaybird X3. I was afraid they were going to fall or if my ears, but they lock in pretty well. They sound great, and the always on Google assistant is so useful.

I currently use the Bose SoundSport buds and although the sound is pretty good they have one really annoying feature .. phone calls only come through the right bud. Do the Pixel buds broadcast the call across both buds?

Hey Andrew, mine arrived today and yes they do broadcast to both ears.

Do you know if this will be available in jbhifi? I still have my store credit from buying the pixel 4, but it only works there.

A bit annoying that Google isn’t selling pixel buds in the places it sells the pixel phone.

I bought the pixel buds early from the US. I want to love them but I have had issues even with the latest firmware. The odd bluetooth audio glitches and faint background buzzing. Considering I overpaid I’m not too happy. Hoping future software updates will help. Other than that they do fit nicely and have a premium feel. Sound is good but not much better than galaxy buds which are cheaper

This is sort of why I avoid getting stuff from the US not available here. I sort of hope they feel they have this fixed either in Hardware of this batch or with an upcoming software/firmware update. I didn’t expect them to release more in more countries if there were going to be more complaints. I could, of course, be wrong.

I do like the fact you can use each earbud independently. Does it auto-pause when you remove the earbud from your ear?

That was meant to be a feature.

Yes it does. Source: purchased and received yesterday

No mention of the always on Assistant? To me, this one thing I was really looking forward to in the older days. You know, the time before we were never allowed out of the house that already has 9 odd Google Home devices (not exaggerating) in it! My thought of being in the office (remember those) and having one in all day to be able to use them for assistance was one of my big reasons for waiting so long. I know this is a quick hands on but thought that was a bigger deal then the translation that is… Read more »