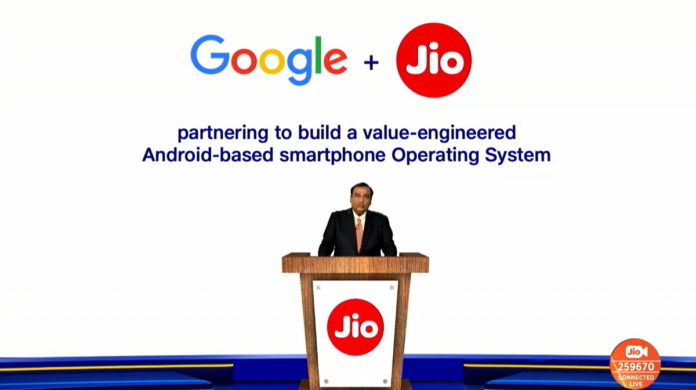 Google has revealed overnight that they have invested US$4.5 billion (₹33,737 crores) in Indian telecom company Reliance Jio for just a 7.73% stake in the company. The investment is part of its US$10 billion Digitisation Fund designed to help India become technologically self-reliant.

Reliance Jio is India’s newest but already the biggest telecom — given that $4.5billion is just 7.73% it is certainly a very large company. The new investment in Reliance Jio will provide for revamping and expansion of their 4G network along with the development of an entry-level smartphone designed for India with an optimised Android and full Play Store experience.

Everyone should have access to the internet. Proud to partner with @reliancejio to increase access for the hundreds of millions in India who don’t own a smartphone with our 1st investment of $4.5B from the #GoogleForIndia Digitization Fund.https://t.co/1fP8iBZQfm

Google are not the first company to invest heavily in Reliance Jio with Facebook (US$5.7billion) and Qualcomm (US$97.2 million) also investing significant amounts in recent times for various things, including a marketplace and 5G infrastructure.

Google’s investment is their next step in bringing Android to more people, with India brimming with billions of potential users. Google in their blog post also discussed their other activities in India as part of their Next Billion Users initiative. Google and Jio hope to bring a large amount of growth into the Indian economy through the development of a new entry-level smartphone — hopefully this is shared with all Indians with India having a large income and wealth differential (like so many other countries around the world):

Google and Jio Platforms have entered into a commercial agreement to jointly develop an entry-level affordable smartphone with optimizations to the Android operating system and the Play Store. Together we are excited to rethink, from the ground up, how millions of users in India can become owners of smartphones.

At this stage, although Google’s first initiative has enabled “more than half a billion Indians to get online” a majority of Indians still don’t have access to the Internet with even more not owning a smartphone.

Although there seems to be a bit of a disconnect about just what this new entry-level smartphone will be the best guess is that it will be a heavily optimised Android smartphone: Reliance Jio talked about Google and Jio collaborating on a new OS whereas Google talked more about a new smartphone with “optimizations to the Android operating system”.

Android Go is designed to run on entry-level hardware albeit on smartphones around the $100 mark but the new OS is suspected to be optimised even further to run on their Jio-branded smartphones which are truly entry-level (<$20).

We wait and see where this partnership will go but it is unlikely the OS will make it to any smartphones here in Australia. Of course Google could learn a lot from these new optimisations they will have to use to get Android onto true entry-level smartphones and just like they did with Android Go many of these optimisations will most likely make their way into the fully-fledged Android in future versions.