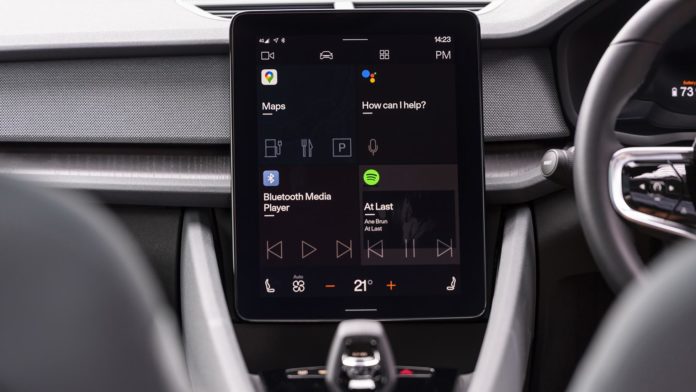 We have been tracking the development of Android Automotive OS since it was first previewed at Google I/O 2018. Android Automative takes Android Auto to the next level with a fully embedded Android Powered infotainment system in the car, including a version of the Google Play Store.

The big question has been, what apps will run on the platform? Being embedded in a car there are certain safety restructures (rightly so) for apps running on Android Automotive OS. Today thanks to the Volvo Polestar 2, which is basically my new dream car, we are getting a glimpse of what apps are going to make it.

Firstly and completely unsurprisingly we have both the Google Assistant and Google Maps, two essential elements for Android Automotive to be a success. Next of we have a range of media apps for enjoying podcasts, radio, audiobooks, and music.

Two glaring omissions from that list are clearly Google Play Music and YouTube Music. To say we’re befuddled that Google hasn’t put their own media streaming apps onto the platform is an understatement. We suspect it will just be an omission due to mentioning local favourites and we suspect Google will make YouTube Music a staple of the Android Automotive experience. Overall we are very excited for the possibilities of Android Automotive OS, and for the Polestar 2 release as well, we think it’s important to tip our hat a little to Tesla who has undoubtedly put pressure on the market to make a vehicle like the Polestar 2 a reality.

Now to get in contact with Volvo Australia to wield our considerable influence and get the Polestar 2 to our shores.

Android Auto is a nothing app. A total waste of space. Wireless mirroring?? Fucking joke. You have to connect it with a USB Cable … hardly ‘wireless’. These pity add ons are just that … pithy add ons. Why not present a platform that would allow people to say instal and run their remote map systems on it. Absolutely fucking useless, the the Google cone heads sit about congratulating themselves on another shit upgrade that gives nothing.

Shame you don’t like yours. I love Android Auto in my car. And it’s a lot safer than not having it.

This is about Android Automotive not Android Auto. Entirely different products, and so your commentary is completely irrelevant to this article. Literally not a single sentence has any relevance to the product being discussed. Mirroring? USB?! Nup, not relevant