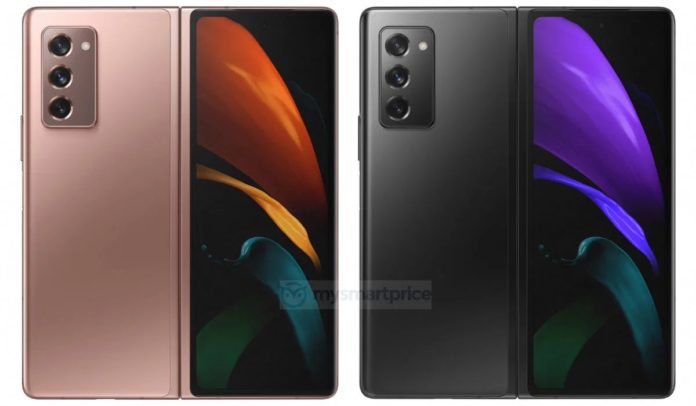 With just a week to go until the Samsung Unpacked online event the leaks and rumours of the expected devices are heating up. The latest one involves some official-looking renders of the next generation foldable device from Samsung, the Galaxy Z Fold 2.

The folks over at MySmartPrice have managed to get their hands on renders showing the phone from the font and back along with it folding, albeit slightly. You may think that there isn’t much left to surprise us with for the Z Fold 2 and you would be right but it’s good to see it all the same.

The rear/outer-rear of the device shows off a triple camera setup which looks similar to the Galaxy S20+ setup we saw earlier this year. The camera module is expected to house 64MP, 12MP and 12MP lenses.

The front/outer-front of the phone can also be seen in the renders and from this you can see that the display now goes very close to filling the entire side of the device with an expected 6.23-inch display. Not quite as bezel-less as their phones but a big improvement on last year nonetheless. The outer display is also expected to support 120Hz refresh rate.

The inside of the device shows that there is no notch again with Samsung opting for the now expected 2020 staple of a punch hole display — or Infinity-O if you want to talk in Samsung marketing speak.

The only two colours the new foldable is expected to arrive in are the two seen here — Mystic Black and Mystic Bronze.

The Samsung Galaxy Z Fold 2 is expected to be announced next Thursday morning, AEST, alongside a host of other devices with up to five different devices rumoured. We will of course bring you all the local availability and pricing information on all the devices as it comes to hand.

I’m looking forward to checking out the Galaxy Z Fold 2. At what price do you think it comes into consideration for entering your stable of purchased devices?