Home News and Editorial Nearby Sharing, Google’s answer to Apple’s AirDrop, is coming to a phone... 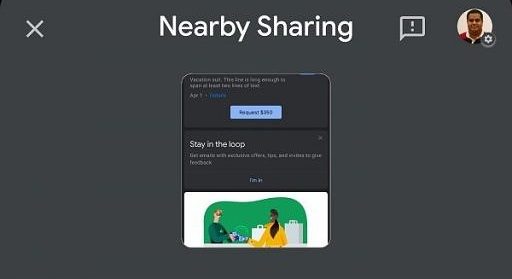 Yesterday some sites were reporting that Nearby Sharing was disappearing from phones that previously had it — phones running the Beta Google Play Services app, and even then a small selection of those. Mysteriously it was just dropping off the devices just yesterday, only weeks after it was enabled.

Now we are noticing, thanks to a tip from a reader, that it is arriving on more phones, and even those not necessarily on the latest version of Android, nor running the beta Play Services app. Our tipster has told us that it is now appearing on their Samsung Galaxy Note 10 as well as their Pixel phone (which version we are not sure).

While still not fully announced by Google it appears that testing of the feature is now rolling out to a wider audience who seem to have one thing in common — updating to the latest Google Play Services app. The switch still seems to be a server side switch though so even after updating it there is no guarantee you will see it on your device.

We are yet to see it land on any of our devices and there is no indication just which devices are expecting it but so far Pixels and Samsungs seems to fit the bill. There are some reports also of OnePlus phones receiving it but we have been unable to corroborate that on our OnePlus phones.

OPPO and some others have their own version of Nearby Sharing so it will be interesting to see if they receive this new Google feature or whether their sharing protocol will be compatible with Google’s — fingers crossed it is, we don’t need even more fragmentation in the Android ecosystem, especially not for a feature such as this which users have been screaming for for a long time. If you have the latest Google Play services, which you can grab from here, let us know in the comments below whether you have Nearby Sharing active on your phone. Try it out and let us know what you think.

Considering what Google are trying to do with Samsung over smart assistants, what’s the betting that Google will ‘commence talks’ with Oppo over this matter.