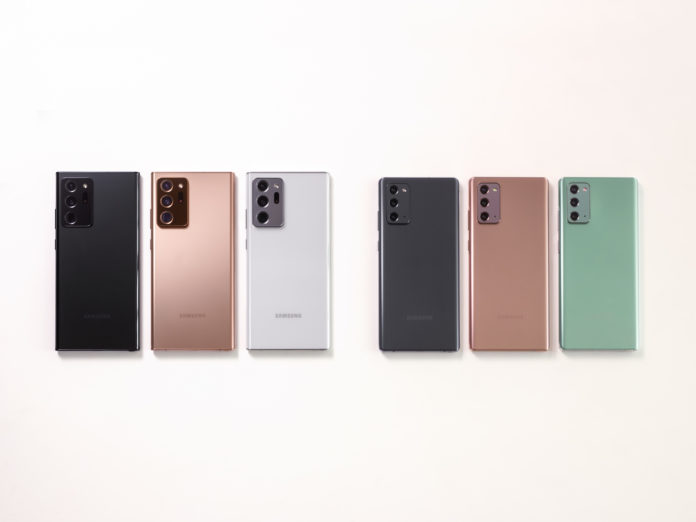 For Samsung, this year’s Note range is all about power – power to work, and power to play. The new phones come in at a sizeable 6.7- and 6.9-inches, with a modest centred hole for the front camera (Samsung calls this screen layout “Infinity O”) and a screen that’s practically bezel-less. On the standard Note 20, that screen is a Full HD+ resolution Super AMOLED Plus display, while on the Ultra it’s a Quad-HD+ Dynamic AMOLED 2X. Both devices offer 120Hz screen refresh rate for a buttery smooth user experience, They’re 21:9, so they’re taller and narrower than phones of old, which should make them easy to handle despite the size. Samsung says these are the best screens they’ve ever made. 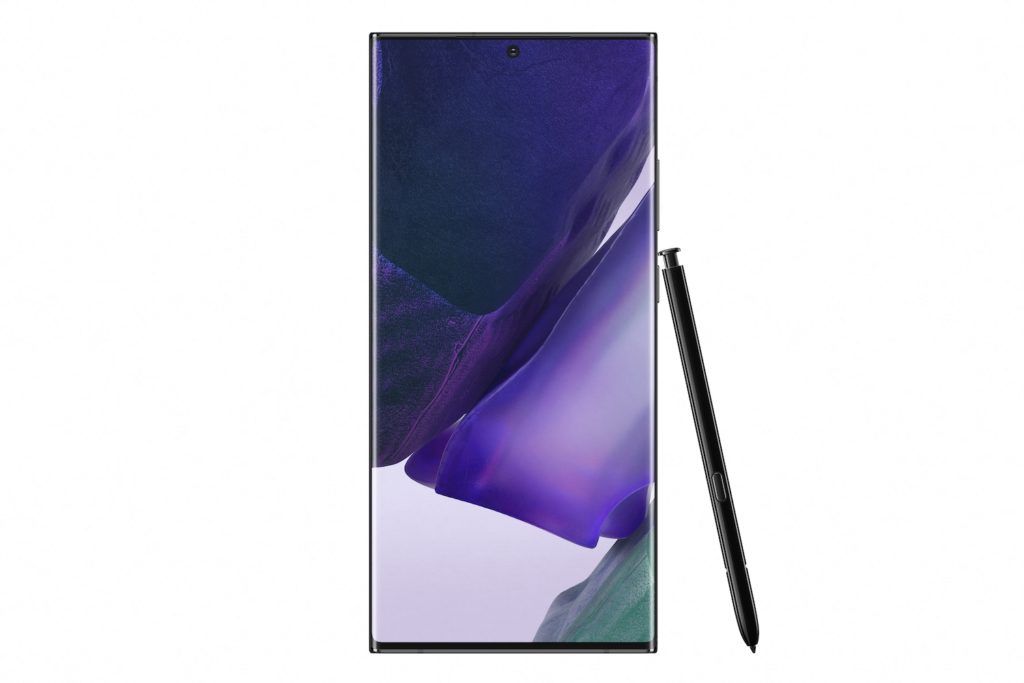 If the Galaxy Note series is defined by something other than size, it’s the inclusion of the “S Pen” stylus for operating, writing and drawing on the screen. Users love it and swear by it. Samsung likes to iterate on the S Pen each year with some new features and 2020 is no different, with the company claiming improvements to latency making it feel much more natural in use, like a pen on paper. There’s also five new “Air Action” gestures – you can trigger standard navigation options (back, home or recent apps), or set off smart select and screen capture operations by moving the stylus in the form of a particular shape in the air.

Internally there’s a curiously-unspecified Octa-core processor (it’ll either be Exynos or Qualcomm, we’ll find out soon enough) with a big 4,300 mAh battery on the Note 20 and even bigger 4,500 on the Note 20 Ultra. The phones support USB Power Delivery for quick charging from an appropriate power source, but only QC2.0 otherwise. As it has been for a few years now, Samsung also suppors Qi charging with fast wireless charging 2.0 supported (again, with the right hardware). 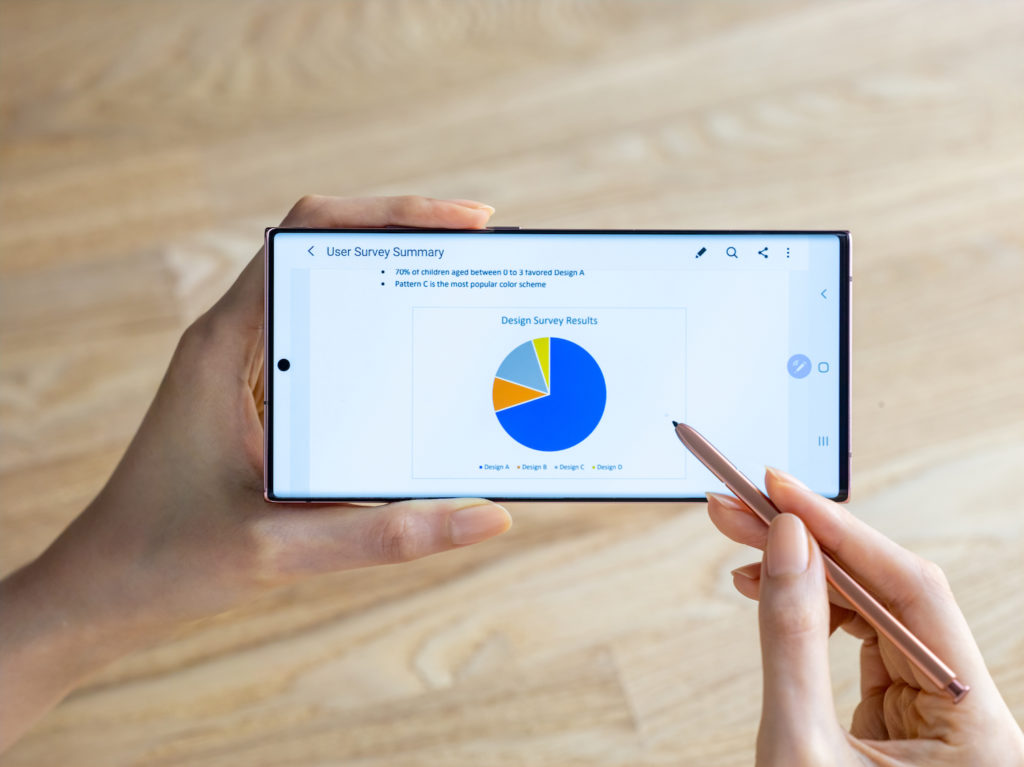 Samsung Notes has, unsurprisingly, become one of Samsung’s core apps for the Galaxy Note range. It’s receiving an update with some new features to make it more useful – notes can now sync between devices, there’s new transcription/recording features that syncs the text of your notes with the timecode in your recording, you can now import and annotate PDFs and a deeper heirarchical organisation of your notes is now possible with nested folders so you can arrange things just the way you like.

The company’s also maintaining its relationship with Microsoft, with both work and play features. The phones offer the ability to link to Windows to show notifications and apps. Samsung’s also making sure that their Samsung Notes app syncs up with Microsoft’s Office products. The Galaxy Note 20 will also be compatible with Microsoft’s Xbox Game Pass Ultimate streaming service, starting on September 15. You can pair a controller to your phone and stream any games included in your subscription. We haven’t talked about the camera. There are some differences between the cameras on the Note 20 and Note 20 Ultra, but Samsung’s not made a big fuss of either of the cameras themselves, preferring to direct attention to their Pro Video enhancements. While Samsung’s long been lauded for the quality of video coming from their devices, the Note 20 series sees a step up with big enhancements to the app including pro-grade control over focus, audio, exposure, and even the speed at which zoom controls operate. It also features better support for external audio sources (personally, long a bugbear for almost all Android devices). A clever feature is the ability to use external earbuds like Samsung’s new Galaxy Buds Live to perform noise reduction. 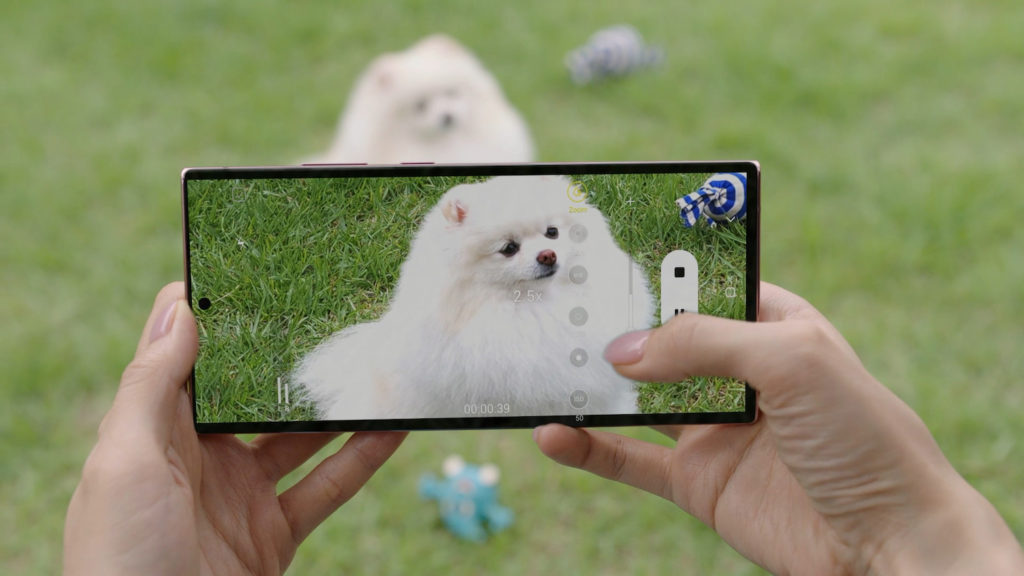 Samsung’s also getting a little experimental with a new tech rumoured in recent weeks called UWB, allowing some advanced features and Nearby sharing – as long as the other device you’re sharing to has UWB. The technology allows you to point devices at each other and share wirelessly with people in your field of view. Samsung’s promising to develop the technology further to allow AR-style overlays on camera input so you should, theoretically, be able to see where your keys are hiding (or, maybe, know when to call the Ghostbusters).

Finally, there’s also DeX. The device that began as an add-on to power a big-screen desktop experience when plugging your Samsung devices into external monitors slimmed down to a smaller form factor last year and this year has gone completely wireless. You can now use DeX to send your device’s output to any Smart TV that supports Screen Mirroring. That’s a little different to the original remit of a desktop monitor, but you can still use Bluetooth to connect input devices. DeX now supports multiple displays too, so the display on the TV can run independently of your phone so you can run different apps on the device in your hand while running a video player on the DeX-connected screen. Samsung’s always delivered powerful, premium devices in the Note range and these devices seem no different. There’s a lot of technology and power packed into these phones, and if you’re a Note fan you probably just want to know when and where to buy them. Fear not, as preorders for the Note 20 and Note 20 Ultra are going to start pretty much right away.

First up, the devices will be available in just 2 weeks time – Friday August 21, starting at $1,499. If you preorder, you’ll either get a bonus Galaxy Buds Plus (Note 20) or the new Galaxy Buds Live (Note 20 Ultra).

Secondly, colours. Samsung’s finally managed to bust the black/white duopoly that’s defined the Australian phone landscape, at least on the base models. The Note 20 will be available in Mystic Bronze, Mystic Green and Mystic Grey, while the Note 20 Ultra will come in Mystic White, Mystic Bronze, and Mystic Black. What’s with all the mysticism, you ask? Samsung says they’re soft, neutral tones (they should always be fashionable) and they feature a new textured “haze” effect that should ensure the phones aren’t fingerprint magnets (and hopefully give you some grip on the device).

We’re expecting to see the Note 20 range hit all carriers, and will bring the pricing and plans to you over the course of the next day.

Is it worth to buy the USA version through Amazon? Would it work here in Australia? I was keen to buy my first Note, but getting confirmation from Samsung Australia that it comes with Exynos made me think about getting one from USA. The other option would be wait for the announcement of the Oneplus 8T Pro.

UGH, scavenging around for any sort of concrete confirmation as to what processor we are to get over here, is doing my absolute head in..
The level of effort they’ve obviously gone to, in order to avoid any friggin’ utterance of the word processor (and quite blatantly leaving out the words ‘Snapdragon‘ & ‘Exynos‘ all together!), despite having the sheer gall to boast about it’s new flagship line-up showcasing the most powerful/optimised processing capabilities as of yet, quite frankly, pisses me off like no tomorrow.

Actually as far as processors go, Samsung generally doesn’t mention them at launch events because they’re global (& they try not to go to specs like that these days). We’ll find out.