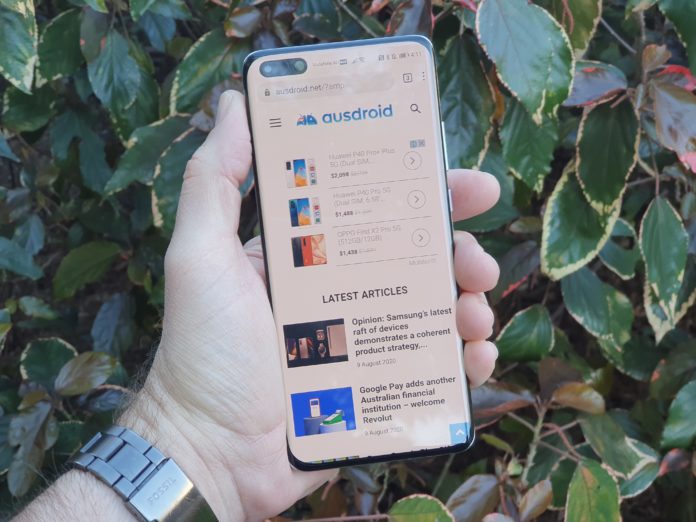 Huawei released their latest ultra premium mobile in Australia this week and we have had the opportunity to spend a few weeks with it prior to launch. As with all of Huawei’s recent devices, it was hallmarked by exceptional craftsmanship, extraordinary cameras and an overall performance that any OEM would kill to achieve.

Unfortunately, though, any time we discuss Huawei we have to acknowledge the unfortunate truth that they have been significantly held back by the US government. I care not for the politics of the matter (or whather you agree or disagree, or whether you’re a xenophobe or not) – the simple fact is Huawei is being denied access to the Google Android ecosystem, and because of this, the experience is vastly different from what it could have been.

Huawei devices do run on Android, Android 10 in fact, the Android Open Source Project AOSP to be precise, and in general use it feels just like a Huawei Android phone felt just a year ago before they got trumped. But without Google Play Services – and the wider app ecosystem that comes with it – Huawei’s P40 Pro+ is a long way from anything we would normally use.

Yes, Huawei has undertaken a Herculean task in developing their own services framework and app store, and for the apps that have made the transition most of them are just as you’re used to. It’s also true that you can side load some apps, and the Amazon App store and get more apps that way. For example, I have the majority of Microsoft apps running on the P40 Pro+ for work.

And finally, yes, you can (kind of) side load Google Play Services, and the app store etc. Here’s the thing though – you just shouldn’t have to. We feel that Google’s Android ecosystem is all the poorer for not having Huawei’s hardware in it, and Huawei’s hardware is hamstrung by being denied access to the key component of Android.

However, Google should be worried.

Huawei believes it can bridge the divide, and then USA, and through no fault of their own Google, may just find themselves competing with a company who knows how to make great hardware and ecosystems end to end.

All of this is to say that we have decided to not review the software side of the Huawei P40 Pro+. There’s just no point. Our conclusions about the software on the P40 Pro+ are much the same as they were when we reviewed the Huawei Mate Xs, another outstanding device hobbled by the USA.

Instead we are going to have a hands on look at the hardware of the P40 Pro+ and see where it is, and where Android could have been without the ban.

I don’t know if it’s retired elves from Santa’s workshop, magical faeries from the gardens of Hogwarts or just really skilled people, but Huawei know how to through a premium devices together. Old terms like zero gap construction, and precision engineering come to mind as you run your fingers over the curved lines of the P40 Pro+.

This is how phone should feel, it has a heft when you hold it, hinting at the density of tech packed within, yet it’s not heavy to the point of being cumbersome. I will say that it’s slippery, the pre-retail model I was allowed to use did not have Huawei’s traditional TPU case in the box (don’t worry retail models will), and so I was always ever cautions of this silky smooth stone slipping from my grip.

You couldn’t discuss the P40 Pro+ design without stopping by the camera bump, I’ll be honest, its pretty sizeable, then again with all sensors, OIS and telescopic lenses in there it’s understandable. But it stands out enough to make the phone balance to one side when on the table. You would have wanted a case anyway with this devices, so the camera bump as always will get hidden by the case.

I have decided that I truly love 2 things when it comes to smartphone cameras. Firstly multiple lenses, and secondly assistive technology for choose optimisations when taking photos. Yep you guessed it the P40 Pro+ has both.

The P40 Pro+ has 5 cameras on the rear, four for imaging and one for 3D depth sensing. The ability to switch between discrete cameras when taking photos is a real advantage. I have tried software emulated lenses, and they’re not the same especially for wide angles, you can’t invent pixels that’s aren’t there.

Inside the Huawei P40 Pro+ includes:

On their own each lens is impressive, providing stunning results. But in a single device with switching between them as simple as tapping a button it delivers a truly flexible photography solution.

I was recently on a construction site wanting to document part of the process, due to OH&S I was not allowed within the construction zone, however through rapidly switching from ultra wide, to normal to telephoto (up to 10 X optical) I was able to completely document what was going on, including some very close up detail. Computational photography is great, but nothing beats a dedicated lens, or four.

I know my smart phone camera can do a lot of things, here’s the thing, outside of switching cameras I just don;t use the features, except maybe night mode. With Huawei’s camera app you get real time implementation of various photo mode depending on what you’re doing.

Taking a photo of food, food mode is enabled, grabbing a macro, wammo the camera adjusts to the environment. This may all be a gimmick,. but it;s one I like. The camera will even auto initiate Night mode, my favourite mode. This sort of thoughtful UI is a real pleasure to use, and if you don’t want that effect you can simply tap an x to dismiss it.

Unfortunately due to COVID I was not able to take a photo walk with the P40 Pro+ and as such I found my ability to show off the camera reduced, even though I could see the potential. Close ups of my office credenza or photos into the distance of my suburban landscape somehow aren’t very picturesque…. even with this camera.

Overall the Camera on the Huawei P40 Pro+ lives up to their claims. Are the photos processed in away you like, well that in the end is an individual taste. However if all of my photos were taken with this device not only would I be happy, I think it would help me take better photos.

If you’re looking for something missing in the Huawei P40 Pro+ you’re not going to find it. It’s jamb packed with the latest of everything and everything inside it works as you’d want it to. The only thing that some may say is missing is a 3.5mm headphone jack, but we’re just not having that discussion here.

The P40 Pro+ is smooth, like buttery smooth. Every aspect of the device just glides and I was never able to trip it up, even running at 90 Hz. The battery life from the 4200mAh battery was just incredible, the fast charging made this a phone I think would last for days for years. Even without my full complement of apps I was hammering this phone all day and it just lasted.

Reviewing this device is almost like a tale of two cities.

The hardware and performance of the Huawei P40 Pro+ are such that this would be my primary phone if I had my way. It is well built, the camera performance is exceptional and the overall feel of the phone is smooth. Huawei has left nothing out of this device.

However, Huawei is very much caught up in the state of global affairs, and the cold relationship between the US and China has denied this phone access to all of the software it needs to excel. Sure, Huawei has done a good job of building the start of an app ecosystem, and I am sure that they will continue to expand it. However in the west where that journey started later and is going slower it seriously reduces the utility of the device. To say that this saddens me is an understatement.

Where does that leave the Huawei P40 Pro+? Well that’s up to you. At $2,099 RRP it is right up there with the most premium of devices, which makes it a hard sell to begin with. When you add to the value proposition the lack of carrier support, the lack of broad retail availability, and the complete absence of any Google services, you’re likely left wondering why you’d pay $2,099 for this phone.

If you don’t mind the price, and if you can get every app you need from Huawei’s App Gallery (or via side loading) then sure, I’ll unreservedly recommend this device.

However, for the majority of you, this simply won’t be the case.

Huawei’s P40 Pro+ would have been one best phones of 2020, and would have been a seriously contender for phone of the year. But without Google Software it’s hard to evaluate it on the same level as other devices until (unless) the Huawei App Gallery is completely matured, for the western market.

Why are you calling this global political editorial, a review?

Nice hardware but software is pretty crap.
The 4a might be the value buy.

I REALLY want this phone and I’m prepared to give up Google. But, I’m an Uber driver and the app won’t work. So disappointed.

All I see is Samsung dancing with Joy, they seriously don’t have competitor

And that is why Samsung is selling substandard phones to most of the world: yes, I’m talking about crappy, obsolete, hot running Exynos 990 chipset in the latest Note 20 Ultra phone. In the meantime, US and some other blessed markets get the upgraded Snapdragon 865+ chipset!
Samsung needs some serious competition like Huawei ASAP!

Well , i dont know the Kirin/mali huawei devices are so much to aim for when compared to the Exynos Mali powered recent flagship galaxy`s given even the slower earlier in the year S20 + plus model convincingly did garys speed test about 50 seconds faster than the P40 Pro Plus , and the snapdragon powered ultra took another 30 seconds off that time.
But i do agree it is absolutely not fair that in some regions they get the beastly snapdragon powered galaxys and we get the lower performing global Exynos/Mali chipset models .
And just for comparison .

Such a shame. Great hardware as always from Huawei on their high end devices, but unfortunately totally useless software/app support for the Western Market. I’m not sure why they persist to be honest? Maybe they’re hoping the ban will end one day and they’ll push a ROM with Google Services to these devices? As far as I know a lot of apps that are built/designed and the company is in America can’t be on the Huawei App Gallery? Do you guys know anything more about this? If this is the case then a lot of popular apps will never be… Read more »