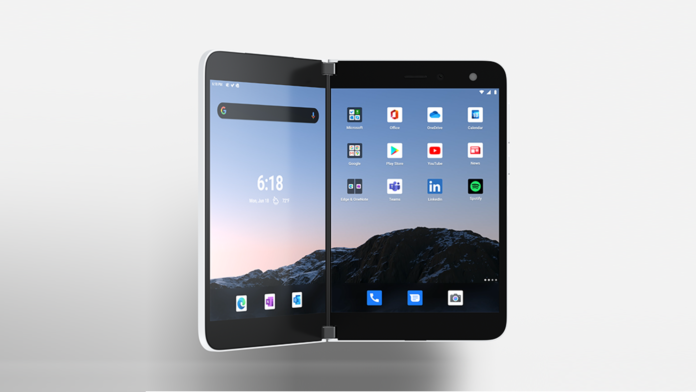 For months we have been tracking the rumours and trickle of information about the impending release of the dual-screen Android device from Microsoft, the Surface Duo. Today they have announced the USA pricing and release date.

Pull out your wallets and get ready, on September 10, 2020 the Microsoft Surface Duo will officially go on sale for US$1,399. Converted to Australian Dollars that is around $1960 AUD, and if you take the normal Australia tax into account would likely be $2110. While no specs were listed we know that unfolded the Duo will sport an 8.1-inch “Fusion display”, comprised of two 5.6-inch displays. Using the 360 degrees hinge the Duo can be used as a single display, fully open or anywhere in between.

Rumours suggest that the Duo will be powered by the Snapdragon 855 paired with 6GB of RAM and up to 256GB of internal storage. Powering all of this and the dual screens will apparently be a worryingly-small 3,460mAh battery.

The Surface Duo will launch with the full complement of Microsoft apps as well as the mandatory Google apps. It’s unclear if the Surface Dup will be launching in Australia, but we deeply hope that it will.

No NFC, no 5g for that price is a joke

Will
Reply to  Htc

Typical Microsoft first-gen hardware. Overpriced and missing key features the rest of the market has moved onto

Anyone know if the Surface Duo will work on Australian Network Providers?

Looks like it’s coming out in the US first, with details for other countries to come at later date:
“Initially, Surface Duo will be available in the US. We’ll share more information about market expansion at a later date,” Microsoft said in a statement.

Checked the tech specs on Microsoft’s US-the LTE bands do include B28:
https://www.microsoft.com/en-us/surface/devices/surface-duo?activetab=techSpecs

I got a reply back unfortunately not 🙁 Hi Jim This is Patrick from Microosft Store This is about the Surface duo band inquiry case number: 1506728071 As I checked here as of now the bands can be use on US only meaning this device can be only use on US if you want to use the LTE capabilities of it, but im possitve they will release a version that is compatible with the network on different country’s is just that we dont have exact date for it as of now. Just check the website from time to time and… Read more »