Home News and Editorial Citing security, Google will force apps to use the built in camera... 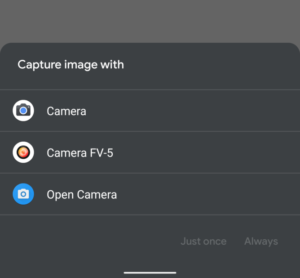 Everyone would have seen it — you may see it with browser apps too where you can choose which browser app to use to open the link with — but now it is going away for camera apps. Android 11 is bringing a change for apps that ask for photos or videos to be captured.

“… we believe it’s the right trade-off to protect the privacy and security of our users.” — Google Issue Tracker.

Android Police have confirmed with Google (see above quote) that the new change will be made with Android 11 where third party apps will have to use the built in camera app to capture images without being able to search for other options.

Privacy and security are the reasons given for the change and although there is no evidence of users being tricked into using a malicious “camera app” the chance is there so Google is removing that chance. The new change is already in the Android 11 beta so it is expected to make the cut in the final release next month.

While it is not a massive change for most of us there are some who still prefer third party cameras or Gcam ports and for those people this could be annoying but let’s face it, if you want to take a proper picture you are going to do it directly through the camera app of your choice and not through a third party app anyway.

Good, I think all apps should use the builtin camera. I hope it extends to all applications, finally I will be able to use the software optimised for my phone to capture pictures rather than a generic camera API.

Bad luck for any Pixel 2 owner. Now that the camera app is completely broken and Google are taking no interest in fixing or acknowledging the issue, all apps that require the camera will be similarly destroyed.

For any device which takes BETTER photos with a third party app, with this change, Google are actively acting to ruin the user experience for such devices.

There’s nothing stopping you from using that third party photo app to take an image, then uploading in whichever app you need to. A little less convenient, sure, but the option is still there.

That depends on the app, some of them only let you take photos from the camera rather than select from gallery. I have a “fake camera” app that comes up in the camera selection menu and then let’s you browse for any picture. This will be blocked with this change 🙁

Might as well own Apple products. I used to defend Android and ridicule iPhone users for being in such a locked down ecosystem.

Apple = we know best, its our way or no way
Google = no much different now

And while I’m at it, want to sync a Fitbit or run a wifi scanner app – must have location permissions enabled for them to work so Google can catalogue all the wifi & bluetooth devices in the world

Well , i have been thinking for a while(some years ) now android phones and software and apple phones and software would eventually be very very much alike and keep drawing on each other . And this now seems to be very much the case , apples recent software improvements allowing some flexibility in the skin user options and android becoming a bit more closed wall in some ways , you can see it happening . In some ways it is a good thing i think , in other ways it seems a bit over bearing in some areas on… Read more »

This is my hope as well. WhatsApp is another perpetrator that takes sub optimal screens. Hopefully this solves that issue.

It won’t affect Snapchat/WhatsApp as their camera is an internal app feature rather than a camera you had to pick so they can continue to operate as they currently are.