Home News and Editorial The first of the next gen Wear OS devices just leaked out... 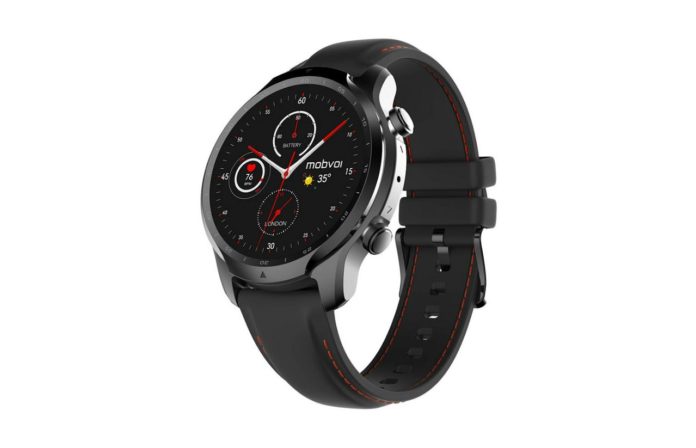 Qualcomm announced that Mobvoi would be releasing a new version of the TicWatch Pro this year running the new Snapdragon Wear 4100 platform processor, and now thanks to Amazon we have our first look at it. The Ticwatch Pro 3 with GPS looks like it will be launching, in the UK at least in early October.

That price is a premium over their previous device, which hopefully means that the rest of the device has had improvements as well. GPS is confined and Mobvoi has released 4G variants as well so it’s unclear if the TicWatch Pro 3 will include 4G in the launch SKU, or if that will be added to a later update.

The big focus for us will be the processor. Having already been confirmed as running the latest 4100 platform Snapdragon Wear processor we are very interested to know if it is the plus or standard variant, Qualcomm’s statements were a little unclear. The Wear 4100+ platform will include an AON (Always On) Co-processor to provide ultra low power performance for always-on tasks which should dramatically improve both wake responsiveness and battery life. WearOS needs both of these things improved.

The TicWatch Pro 3 hardware itself looks more refined with a slightly sleeker design, a 2 button UI, sorry no 3rd button, unfortunately, and a microphone hole is clearly visible. Mobvoi typically uses magnetic charging but we can hope for wireless. It should sport at least 1GB of RAM and 4 – 8 GB of internal storage and HR tracking at a minimum.

The TicWatch Pro line has always been differentiated by Mobvoi’s second translucent display that sits above the standard LCD panel. This allows for an ultra lower power mode while still showing critical information like the time, date, steps etc. It’s very unlikely that the TicWatch Pro 3 would launch without this display.

With a little over a month until the TicWatch Pro 3 launches, we won’t have long to wait, and I for one am very excited to start seeing the next generation of Wear OS hardware.

using Tic watch pro 4g LTE version with Telstra eSim. works great, Since its 4gb only the usable memory is only 1.6GB. hope they come up with 8GB

Have they changed the “translucent” display, Mine (TicWatch PRO 1) as a fuggly hard to read LCD so I never use it. The “translucent” one in the picture (assuming that is what it is) looks like a normal LCD display

I hear you. I have turned mine off as well. Plus I found there was a lag between the normal watch face and the low power one. Very annoying but the watch is great. I was looking at upgrading (cracked screen on the TWP1) but will wait to see the Pro 3 before making a decision.