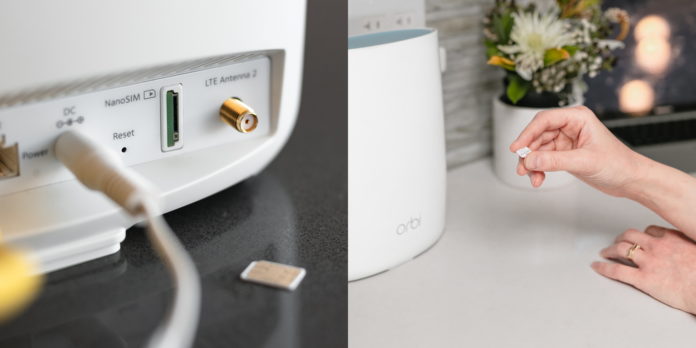 Netgear Australia has combined the capabilities of their Orbi Tri-band Mesh WiFi router system with a 4G LTE Advanced mobile connection to provide an alternative for people who need a portable mesh modem router system that can be transferred anywhere there’s a 3G/4G signal.

The new Netgear Orbi LBR20 works with Telstra, Optus and Vodafone SIMs and the LTE-A Cat 18 modem in it supports all three Australian mobile carriers’ 4G and 3G bands.

The LBR20 aims to offer reliable network access for rural or outback areas with limited options for traditional wired internet connections, as well as those who live in areas that are not currently covered by the NBN, providing high-speed internet for learning, work and streaming. It is also ideally suited for people who have holiday homes where they don’t want to pay for NBN connectivity all year.

Additionally, the Orbi router can be used in conjunction with an existing NBN wired service to provide a fail over, ensuring internet connectivity is consistent and uninterrupted.

Supporting up to 1.2Gbps over 4G LTE Advanced (subject to mobile network coverage and local cell congestion level) and the high-performance tri-band AC2200 WiFi, this new Orbi Mesh WiFi router is powered to provide an uninterrupted network connection for the smart connected home or small business.

“Today, we are living in an era defined by our ability to stay connected, as many of us are working and learning from home. We have designed the Orbi 4G LTE Advanced Router to address this demand for uninterrupted internet access with its capability to provide connectivity over both 4G LTE as well as traditional wired network connections.”

The LBR20 has a claimed coverage area of up to 185m2 of WiFi coverage using it’s high-gain internal antennas and can be easily extended by pairing with any Orbi Tri-band WiFi 5 (802.11ac) satellite to create a mesh WiFi system.

The benefit of having a tri-band mesh Wi-Fi system vs dual-band is that the Orbi LTE Advanced Tri-band router features a patented dedicated wireless backhaul between the router and satellites to provide robust uninterrupted data connection to extend the reach by an additional 185m2 for each satellite added to the system. With the benefit of a single WiFi network name (SSID), uninterrupted seamless connectivity is thus supported while roaming from room to room.

In comparison if you use a dual-band mesh Wi-Fi system the fastest speed will be on the mesh node connected to the internet directly and the further away nodes will offer lower speeds as they transfer data between the nodes on the same channel as your Wi-Fi devices that connect to the internet.

As part of the Orbi family of mesh WiFi systems, the Orbi LTE Advanced Router can also be paired with additional satellites such as Orbi Voice or Orbi Outdoor to gain greater coverage and additional features, such as a smart speaker with Alexa voice assistant. The Orbi app makes it easy to get started with a quick installation, providing access from anywhere to manage and monitor your Orbi home network.

Circle Smart Parenting Controls are built-in for free, allowing the modem router administrator to manage content and time online on any connected device. With the app, parents can easily create daily time limits for apps and websites, set filter levels for each family member and pause internet by device or by family member.

If you like the idea of a modem/router with built-in security preventing viruses, malware, stolen passwords and identity theft to safeguard your home/small business network, a 30 day free trial of NETGEAR Armor powered by Bitdefender is included. After the trial period, a paid yearly subscription is required in order to continue protecting connected devices.

We sell these now, haven’t got them up on the site yet. New site coming very soon.

They work really well. Worth noting that the Telstra version LBR1020(sold only by Telstra) is only Dual band, is a lot physically smaller and comes with a satellite. The reviewed model doesn’t.

Other benefit of the reviewed model is SMA vs TS9 on the Telstra model for external antennas.

And that CAT 18 modem on both!

How much better do you think the performance would be with external SMA antennas attached?

Well it varies on location, however where I am I barely get signal and without antenna I get around 1mbs. With a directional antenna, it goes to 140 odd mbs.

This is with the inbuilt speed test on the router itself.

Not sure what you mean? Band 28 is there.