Home News and Editorial Nokia’s newest Android TV device is ready to hit the market, in... 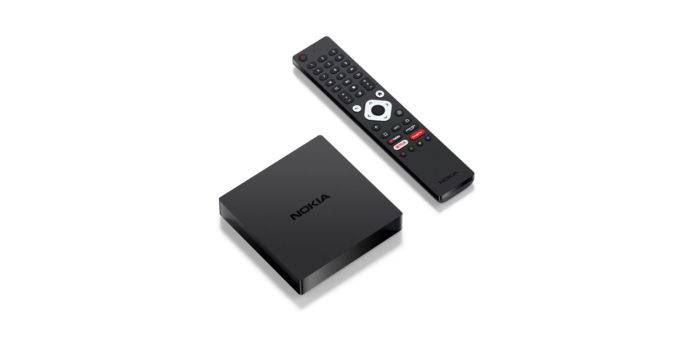 Remember Nokia, no not that Nokia, no not HMD Global who make the phones, Nokia the company who now just licence their name for people to slap on other products, yeah that Nokia. Well it looks like someone is about to release a Nokia branded Android TV device and, all the snark aside, it actually looks interesting.

The 4K enabled “Nokia Streaming Box 8000” will hit the shelves with a larger than normal IR remote, and an almost complete set of ports. Around the back is HDMI, USB-C, optical out, audio out and a LAN port, and on the side is a USB-A port for good measure. If there was one thing missing it would be a coaxial in so you could plug terrestrial TV into the box, but who uses that anyway?

This is the second Android TV device we are aware of that has been engraved with the Nokia name: the original device didn’t make a big splash at the time. While this is just a while label re badge from a OEM who offers several variants of Android TV powered set-top boxes, it’s good to see the ecosystem continue to grow and that’s good for all Android TV users. The device is set to launch before Christmas in Europe, and we doubt we’ll see it expand to our shores, at least unofficially. The big question we have is will devices like this ever see the move to Google TV? With Google fragmenting their TV platform for the next few years we may end up living with a little uncertainty in the TV space.

I can’t see it being better than Chromecast with Google TV. If they had included an input for a TV aerial that works have differentiated it a bit.