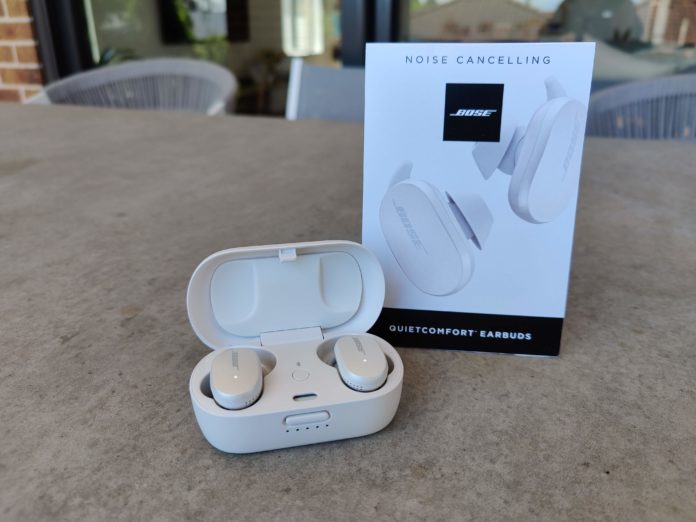 A couple of years ago we tested out Bose’s first attempt at true wireless earbuds and were left fair under-whelmed with their size and lack of performance. To say we expected more from such a big name in audio is an understatement. This year they have decided to not just bring a new set of true wireless earbuds to the market but also add in noise cancelling — after all that’s what everyone is doing this year.

The Bose QuietComfort (QC) earbuds have been in our hands for the past couple of weeks and while plane travel is out to test the noise cancelling we have managed to run them through a barrage of tests as best we could. Read on to find out why I now think they are possibly the best true wireless earbuds on the market for those who listen to music. 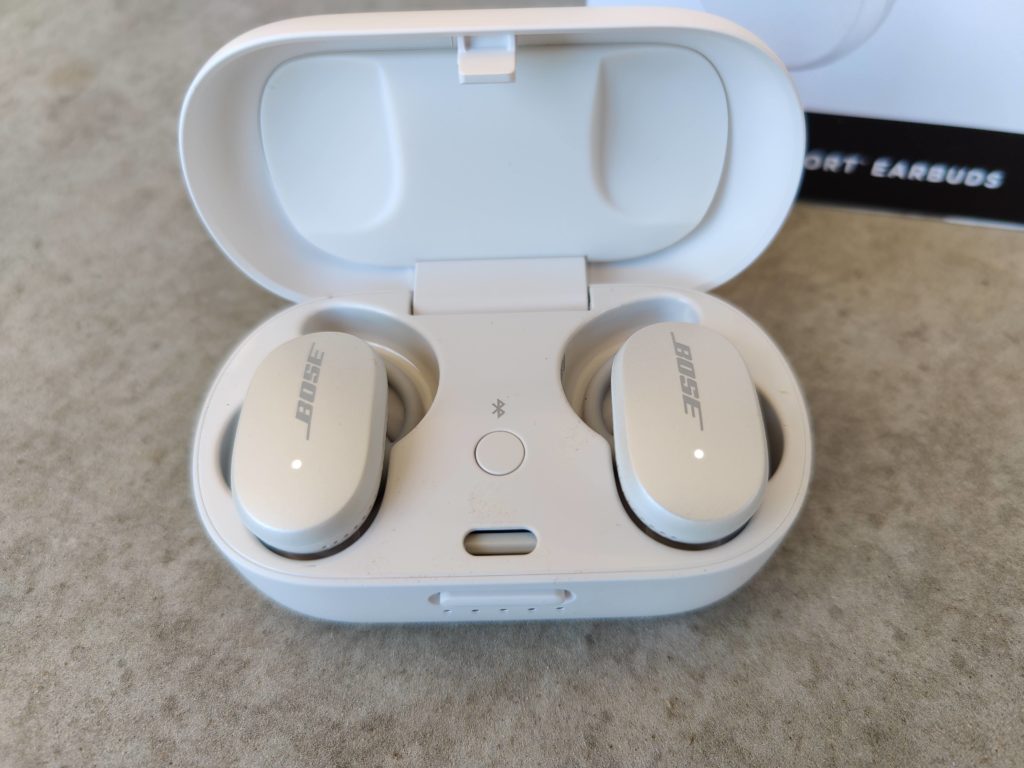 The Bose QC earbuds follow on from their previous offerings in that they fit into the ear using a sharkfin (that’s what I call them anyway) with a bulk of the earbud sitting outside the ear. This time though they are a lot smaller than the previous offering but still not as flush with the ears as something like the Pixel Buds are. The QC earbuds offer Bluetooth 5.1 along with true noise cancelling in an earbud that is available in white or black. They arrive in a case that supports wireless charging along with USB-C charging. The case has 5 LED lights on the outside signifying the charge left within the case — which is quite large.

The case has a clasp on it that is actually quite difficult to open at times with the release button needing to be pushed in quite a bit before the case opens. You can certainly be sure that these earbuds will never accidentally fall out when the case is dropped. A happy medium between the two would have been nice though.

Although not fully waterproof they still offer an IPX4 rating for some sweat and water resistance — but I will not be testing that out at the gym.

The sharkfin on the Bose QC earbuds helps to hold the earbuds not only in the ear but help it to get into the correct location for a good seal. By twisting the fin backwards the earbuds slide into the part of the ear where they are secured comfortably.

Comfortable they most certainly are — although the seal is really good, as you’d hope from a pair of ANC earbuds, they do not sit uncomfortably down the ear canal such that wearing for a long time becomes uncomfortable and painful. The earbuds sit comfortably in the ear not matter how much jumping around I do/did so it’s fair to say they are secure.

The QC Earbuds also do not sit a long way out of the ear like their previous model did, sitting more flush with the tragus of the ear.

The noise cancellation on the QC Earbuds is amazing — when using them side by side with a set of Bose NC700 over-ear headphones the true wireless seem to be nearly as good with their noise cancelling as the larger NC700. My wife said to me yesterday after yelling to me a few times that “these earbuds are no good when you have a wife” (my reply of course was “that is why they are so perfect”). The combination of the ear canal fit and the active noise cancelling hardware makes for an amazing noise cancelling experience.

I tested the noise cancellation out on my 2020 aeroplane equivalent (cammed SS-V Redline with Di Filippo exhaust and more) and it was as if the car was not running — at the same time my wife tells me she was unable to hear the TV at all due to the car revving in the garage, mission accomplished.

As for the quality of the sound that also is on point with the size of the earbuds obviously making a difference this time. Bose are well known for great sound and these are no exception. the depth of the sound from the QC Earbuds is amazing — they have more bass and more upper end than the the Pixel Buds and the clarity of the lower end is much better than the Sony WF-SP800N.

I tested them out on all types of music with even orchestral music sounding great! I have been doing a lot of marking of exams these past week or two and the sound of the “focus” music I was playing was crisp and clear. The fun stuff such as metal and hiphop was great as well.

Those who want to adjust the sound profile though will have to find a good app that works on their phone though as the Bose Music app does not offer this functionality.

I have seen some reviews bagging out the battery life and I have to say I am not entirely sure why. I rarely listen to music for more than six hours at a time so never had the earbuds run out on me (Bose state six hours of battery life on a single charge). The issue I assume is with the charging in the case.

Bose say that the case offers an additional 12 hours of playback along with quick charge functionality where a 15minute charge provides 2 hours of playback. For a case this large that is a bit disappointing but let’s face it, who is going to be using them for 18 hours at a time without a chance to charge them in between somewhere. Even on a plane you could charge the case while inflight.

Bose now use their Bose Music app and although you do not need to use it to pair the earbuds, you can if you wish. Once the earbuds are paired with your device they will nee dot be added to the Bose Music app but once added that is where you will find the few settings that Bose give you with the QC Earbuds.

The main things you will see is the battery percentage of each earbud, the noise cancellation setting and the Bluetooth source. Other settings you can change are the in-ear detection with auto-play and pause when inserting or removing the earbuds, noise cancelling changing to 0 when only wearing one earbud, the ability to set the left earbud to either have the tap and hold of it speaking the battery level of skipping tracks. Unfortunately that’s it.

I would have loved for more functionality options to be added to each earbud but it is not there. Maybe next time?

That is the end goal right? The Bose QC Earbuds sound amazing and have never seen before levels of noise cancelling in a true wireless earbud but there are things that it lacks.

Many true wireless earbuds that support Bluetooth 5 coming out are supporting either ear use. ie. you can take either the right or the left out of the case and use just a single ear at a time. Unfortunately for some inexplicable reason Bose have not included this ability. If you want to listen with a single ear it needs to be with the right only. If you leave the leave earbud in your ear and close the right one inside the case the Bluetooth connection with your device disconnects. If you leave the lid of the case open it will work but that’s not good enough. 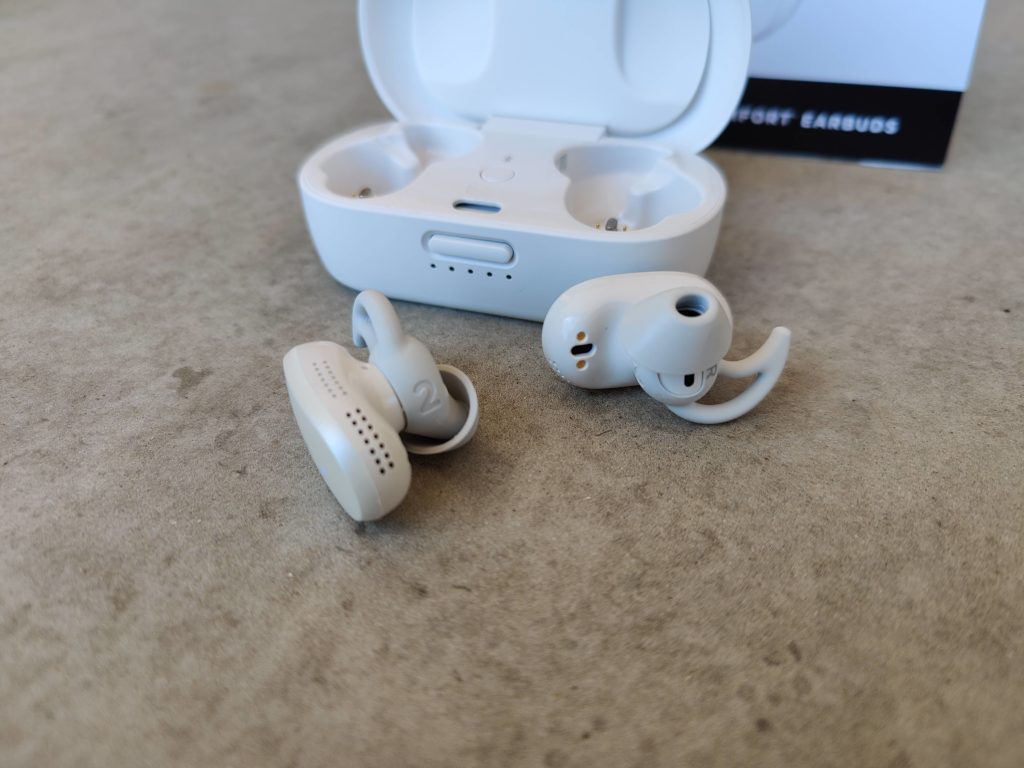 If you take out the left earbud only and leave the right in the case the earbuds will not pair with your device. This functionality apparently needs the Bluetooth chipset in each earbud — something that Bose have either not included or have not implemented in the software just yet. Hopefully the chip is there and just waiting on a software update to implement it — I often use the left earbud only at work due to the setup of my workspace.

Another thing Bose have not included is multipoint pairing so there is no capability to connect to more than one device at a time. I often have my earbuds in when working on my PC while also listening to music on my phone — now I am either shut off from phone sound or PC sound. It’s certainly not a deal breaker but something that would have been nice to have.

One last bug bear I have is no ability to change the volume of the media from the earbuds themselves — this fits into my gripe above about having more functionality options added to the soft touch earbud options. Let’s face it, the requirement for noise cancelling earbuds in 2020 is limited but as we get back to more travelling on public transport and airline travel (in-country) they will certainly have a place.

Sure, they are not perfect but for those who want great noise cancelling without having to carry a large set of over the ear cans then these are perfect. If Bose ask me to return these I will no doubt be buying a set of these before my next flight (2023?).

$399 RRP is a lot to pay for true wireless earbuds but for those who purchase from the Bose website you get not just free delivery but free returns for up to 90 days — a “risk-free trial”. They can of course also be purchased from all your usual tech and headphone retailers. With Black Friday coming this week and you were after something like this I would be on the lookout for deals on the Bose QC Earbuds. Glad they have finished with their out of that ear design style… The z-axis protrusion made you almost looked Frankenstein monster.
They do look nice and flush now, but still a bit of a slab.

Scott, how is their noise isolation, when you don’t have the active noise cancellation turned on?
The battery charge runtime being an issue, on longer direct flights, I think is right on the money. Melbourne to Narita, Japan, near on 12 hours. Sydney to LA, 14 to 15 hours. London Heathrow to Sydney with a single stop in Singapore, Heathrow to Singapore 12 hours, Singapore to Sydney 11 hours, so 2 long flights. Being able to charge the earbuds while in use, with a suitable charging cable, I think would be a useful upgrade for the next model.

6 hours runtime on a single charge. More than 10 hours flight time on the routes I mentioned. That means putting them in their case to recharge, repeatedly during such flights, losing the benefit of their ANC every time they are recharging.
What’s needed is a way to charge them while in use and out of their case.

Now if we could get find a way to get wires to these wireless buds they would be perfect…. 🙂