Home News and Editorial Review: Amazon Echo (4th Gen), a big ball of fun that has... Amazon Echo smart speakers have been around for a long time and while they are not everyone’s cup of tea they have progressed a lot over that time. Sometimes it can be difficult to determine whether a speaker is good because of its digital assistant or in spite of it. Personally I am a relative newcomer to the whole Alexa and Echo family. After testing out this fourth generation Echo I am now a convert — read on to find out why. The fourth generation Amazon Echo is a great big ball which Amazon say helps it to produce its “premium sound”. The shape is designed to provide greater flexibility with sound projection with the sphere providing “greater back volume for fuller and deeper bass” due to its “lowest possible surface area to volume ratio”.

A whole heap of marketing speak no doubt but Amazon certainly have focussed on the audio hardware with this Echo iteration. Inside is a 3.0-inch woofer along with dual 0.8-inch tweeters — more than the equivalent hardware within the Nest Audio — which is meant to produce that rich sound.

The Echo has been styled in much the same way that we are seeing Nest go with their design language — a solid rubber base with a cloth top. Amazon also used 100% recycled materials in making the Echo and I have to say that it really is a good looking device — the spherical nature of it not looking like a speaker at all.

The sphere has four buttons on the top of it — an Alexa button, a volume down and a volume up button and a mic mute button. The buttons are easy to see and use without any accidental touches while positioning the speaker.

The bottom of the speaker has an LED ring around it for when the device is responding to a command — whether it’s a tap of a volume button or Alexa being triggered by the wake word (Alexa). The LED will light up blue when Alexa is triggered, a white when volume is adjusted and red when the mic is muted.

The rear of the device has the power socket — proprietary of course — and a headphone jack, something that is missing on the Nest Audio. For those smarthome folks there is a built in Zigbee hub and support for Bluetooth Low Energy smart home appliances. Adding devices is easy to do using the Alexa app on your phone. I don’t have any Zigbee smarthome devices but plenty of Bluetooth and Z-Wave devices and they all integrated easily.

So how does it sound?

Amazon promise “clear highs, dynamic mids and deep bass” and although the sound is decent I would struggle to stretch my thoughts that far. Although the hardware speakers inside are much bigger and more powerful than the previous generation if you are expecting Sonos-type sounding music from this $149 device you will be sorely disappointed.

The bass in music such as some old school Ice Cube is good but lacks crispness and is relatively muffled — compared to high end Sonos speakers (which cost twice as much). The bass is not overly wall-shaking but certainly good enough for the average listener. If you want that heart pounding bass add in an Echo Sub which pairs nicely and really does shake the paint off the walls in combination.

The mids and higher end notes are hit well with the speaker certainly punching out a range of music well, without being overly heavy on the bass. The clarity of vocals is better than on a Nest Mini that’s for sure with the loudness easily out performing it — at double the price you’d hope so though.

If you dislike how the music sounds Amazon have included audio controls within the Alexa app to adjust it to suit your tastes. 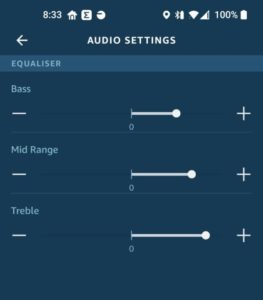 According to the Amazon marketing materials the “Echo supports all of the music services you know and love on Alexa, which includes Amazon Music, Apple Music, Spotify, Deezer, iHeartRadio and TuneIn”. There is one big one obviously missing — can’t we all just get along? Luckily the Echo is able to be easily paired using Bluetooth to your phone or tablet (“Alexa pair”) so it thus supports all music — I suppose it’s more that Alexa does not support all music.

Smartest of the bunch

I have always avoided Alexa because I have always found it being triggered far too easily on my Sonos speakers and its general conversational smarts was lacking dramatically when compared to Google Assistant. It still is which is unfortunate. You cannot easily get it to give directions, time to get somewhere and other basic information you may ask of your digital assistant. Amazon are looking to improve that with the inclusion of their AZ1 Neural Edge processor designed for ML allowing for some on-device processing that will hopefully allow more conversational digital help.

As I said above though Alexa has won me over. The smart home skills on Alexa are second to none. While Google Home and Google Assistant have improved over time Alexa is still ahead of them in this regard. It is so very easy to add smart devices to Alexa and then the amount of control you have over them is much more extensive than with Google Home/Assistant. The speed with which Alexa responds to commands is much faster than Google Assistant. When you ask Google Assistant to do something you often have to wait for a few seconds at a minimum before it does it. Alexa though responds immediately performing the action without delay.

Not only that but the routines within Alexa are also easier to set up and offer many more options and features. I guess its the maturity of the platform that has it so far ahead of Google and maybe Google will catch up one day but you can bet that Amazon will not be standing still waiting for Google to come at it.

I am yet to tell the wife this but I am seriously considering changing all of my smart home control to Alexa (she has only now, 12 months later, finally gotten used to Google Home/Assistant) but in the meantime I am able to use both Alexa and Google Assistant at the same time, for Bluetooth and Z-wave device control.

One extra piece of hardware inside the Echo is a temperature sensor. It may sound useless to ask Alexa what the temperature is in the room but you can use it to trigger routines. I have a Fibaro sensor in my lounge room that notifies me when it gets to a certain temperature asking me if I want to trigger the scene that lowers all the west-facing blinds. I could do all of that without the sensor if (when?) I just place an Echo in there.

So should you buy one?

If you are not in the smart world yet and want a smart speaker that can answer many of your burning questions along with play nicely with your Android phone then probably not.

If you are in the Alexa world already and listen to music on your Echo devices a lot then yes — it is certainly an upgrade with respect to music over the third generation.

If you have a smart home and a lot of smart devices then Alexa in my opinion leads the pack with its overall package which includes hundreds and hundreds of third party “Skills”.

Priced at RRP$149 you can grab it from Amazon in Glacier White, Twilight Blue and Charcoal and if you’re quick Amazon have it on sale for just $119 for the Black Friday sales this weekend.