The new Echo Dot has received a makeover to match that of the Echo and the one Amazon sent us was the Dot with Clock.

The Echo Dot with Clock is without a doubt the younger sibling of the Echo and is a 3.9-inch sphere which is half plastic and half cloth — same as for the Echo. Once again the LED light is placed at the bottom of the device giving it a great look when it reflects off the surface you have placed it on. The light, just as it is for the Echo, is red for when the mic is inactive, blue for when Alexa is triggered and a white when the volume is adjusted.

The top of the device also houses the same four buttons as the Echo — Alexa triggering button, a volume up and a volume down button and a mic mute button. The buttons are easy to press and also not too easy that they accidentally get triggered by a brushing past of them.

The back of the Echo Dot with Clock has the same connectivity as the Echo with a proprietary plug next to a headphone jack.

Inside the speakers are a big step down from the Echo with the Echo Dot with Clock housing a single 1.6-inch speaker. It may be small but the sound out-performs its specs.

So how does it sound?

With just a single, relatively small speaker inside the Echo Dot with Clock you would not expect it to perform as well as the Echo when it comes to music — and you’d be right. It lacks the bass of the Echo as you would expect given it lacks the woofer that the Echo has.

The music is great at the high end and decent in the mid level pitch but for bass it lacks — as do all speakers of this size. Comparing it to a Nest Mini the Echo Dot with Clock actually out performed it. The sound was a lot clearer and the vocals a lot crisper on the Echo Dot with Clock. You can also pair two Echo Dots together for stereo sound should you wish that but I cannot see any reason for it — much better to pair two Echos. 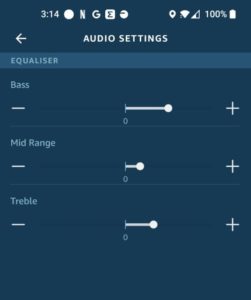 If you really want to listen to music though this is not the Echo you should be buying. This is for your bedside table to play a bit of music here and there.

The Echo Dot with Clock has all the same Alexa smart features of the Echo although it does lack the Zigbee hub capabilities. As such it is easy to use for smart home products. For this review I placed it on my son’s bedside table and it easily connected to his smart lamps and his LifX Tiles. The clock came in handy too — there was no longer any excuse for him getting up before 8am on weekend anymore. Would I recommend it?

The Echo Dot with Clock has its place — and that place is on your bedside table. As an alarm clock that is small, smart, tells the time and is cheap the Echo Dot with Clock is perfect. It plays music decently without being anywhere near audiophile quality and responds well to commands — the clock is just icing on the cake.

The plain old Echo Dot without clock is equivalent to the Nest Mini but with better quality sound. The sound is not only louder but is also clearer and crisper — and in my opinion looks much better. Gone is the hockey puck, in is a much more aesthetically appeasing sphere.

There is a price difference though — especially this week. Normally the Nest Mini is priced at $79 but is on sale for Black Friday at half price for $39. The relatively equivalent Echo Dot is also on sale but not quite as much — it is $49 instead of a usual $79. I would hesitantly say that the Echo Dot is worth that extra $10 over the Nest Mini if you aren’t already fully invested in the Google Assistant ecosystem — it does have better audio and is also better for smart home operation.

The Echo Dot with Clock is another $20 on top of the Echo Dot pricing. Normally priced at $99 it is on sale for Black Friday for $69. If you need a new bedside clock and either aren’t already invested in the Google Assistant ecosystem or are invested in the Amazon Alexa ecosystem then this is a must buy — and this weekend is the right time.