Recently we have reviewed a lot of different smartwatches, some not so smart focusing more on the fitness side of things, while others focusing on the smart side of the business. The Amazfit GTR2 and GTS 2 both attempt to sit somewhere in the middle of all of this so when the opportunity arose for us to test them out we jumped at the chance.

While I am not a full triathlete/runner, well, not even close actually, I fancy a bit of fitness when I have the motivation to do something other than a weights workout. This is who the Amazfit watches are aimed at — not the extra-serious athlete — they should be looking at a Polar or Garmin. The Amazfit GTR 2 and GTS 2 are both a big change from every other smartwatch I have used in recent times. They are not thick watches that sit a cm or so off the wrist but are sleek, svelte and extremely lightweight weighing just 31.5 grams (without strap) for the GTR 2 and 24.7 grams for the GTS 2. The GTR 2 is the more traditional watch design and has an aluminium casing — a steel casing is available in a classic version — this weighs a whole 7.5 grams more by the way. Around the watch face is a bezel surrounding the 1.39-inch 454 x 454 pixel AMOLED display. There are two buttons only on the GTS 2’s right hand side which give you access to the watch menu and every single one of its functions with the top button (red trimmed) and faster access to any of their fitness tracking functions using the bottom button.

GTS 2
The GTS 2 has the now iWatch-associated shape of the rectangle and although the rectangular display has a 1.65-inch diagonal size it has a resolution of just 348 x 442. The GTS 2 has the single button which looks like it allows you to scroll through various menus but instead works only as a press button. Scrolling the wheel it does nothing at all — if they’d added that functionality it would have been much nicer.

Both of the displays are AMOLED as mentioned above and you can tell this by how bright they are and how black the blacks are. The usual AMOLED vibrant colours are present at all angles as well, and even in bright light outside I was able to discern details on the watch face easily.

The touch sensitive displays were exactly that and quite good at it — it really does make you wonder how in the hell Google have stuffed up the responsiveness of WearOS for so long if this small Chinese company can do as good, if not better.

The watches I tested out both came with a silicon band which while not especially premium felt secure and relatively comfortable. The GTR 2 has a standard 22mm band while the GTS 2 has a standard 20mm band so you can add your own flair if you prefer that.

There is no fancy buckle on here just the standard watch band buckle which to be honest I have a lot more confidence in than the press stud band that some watches arrive with these days. The software does not run any well known software such as WearOS or Tizen but instead uses Amazfit’s own OS and the Zepp app on your phone.

Firstly let’s check out the watch interface itself. Just as for WearOS swiping down from the top reveals the date along with Amazfit’s version of Quick Settings. Included are quick controls for torch, brightness, do not disturb, battery saving mode, quick lock, a find my phone ping (which is extremely loud) and volume control. Swiping up from the bottom, you guessed it, shows your notifications. Yes both watches show notifications. The notifications queue up and you can tap on one to expand it for more detail but you cannot dismiss a single notification if you have more than one — you must either dismiss all of them or none of them.

The functions of the watch are accessed using the top button on the GTR 2 and the single button on the GTS 2. The functionality includes PAI (Personal Activity Intelligence), heart rate, SpO2, Workout, Activities, Stress, Activity goal, music, weather, alarm, events and widgets.

All of the functions are fairly well thought out with them offering full functionality of what each says they do. Some of them require connection to a phone but some (such as weather) require that connection. There is 3GB of storage available on the watch giving you the ability to transfer over your own music to it — it will not work with any of the streaming services either.

The watch also offers the ability to control it via voice — not using Alexa or Assistant but their own commands. There is also meant to be some form of Alexa control but I was unable to find it in any of the settings — it is possible that is only US at the moment as the app does say that some functions are “not supported by the currently activated device”.

The watches use the Zepp smartphone app which allows you to not just see the tracking from the watch but also controls updates to the watch. The app has so many settings that it is difficult to get your head around them all. I’ll just throw a few screenshots here as it would take me a long time to discuss them all.

I would even possibly say that the app nearly has too many options as it can be difficult to find them all. There is an app store where you can find more watch faces and there are a lot to choose from.

The watches do the smartwatch thing — to an extent. Although some of the functionality was not possible on my phone you can apparently make phone calls from them but in the end who wants to do that?

For me I want to be able to see my notifications, swipe away the unimportant ones, and either leave or quickly reply to the more important or relevant ones. In the end you cannot do that well on the GTS 2 or the GTR 2. As mentioned above it can only delete all the notifications at once and does not let you reply to any of them, even though both watches have speakers and microphones. The notifications you do see and more often than not accompanied by a default icon rather than the icon of the app from which they originated. So who should buy it?

It is difficult to find a specific market for these smartwatches. They are light, stylish and pack some decent fitness tracking capabilities but as a smartwatch it just cannot cut it — kind of reminds me of Fitbit a few years ago. They are not super user-friendly with a very steep learning curve.

One thing they are though is good value for money. Both watches will set you back around the AU$200 mark and at that price may well be worth it should you manage to find them for sale. There are some Australian stores with them and if you are not particularly interested in full smartwatch integration but are interested in decent fitness tracking then this may be of interest to you. 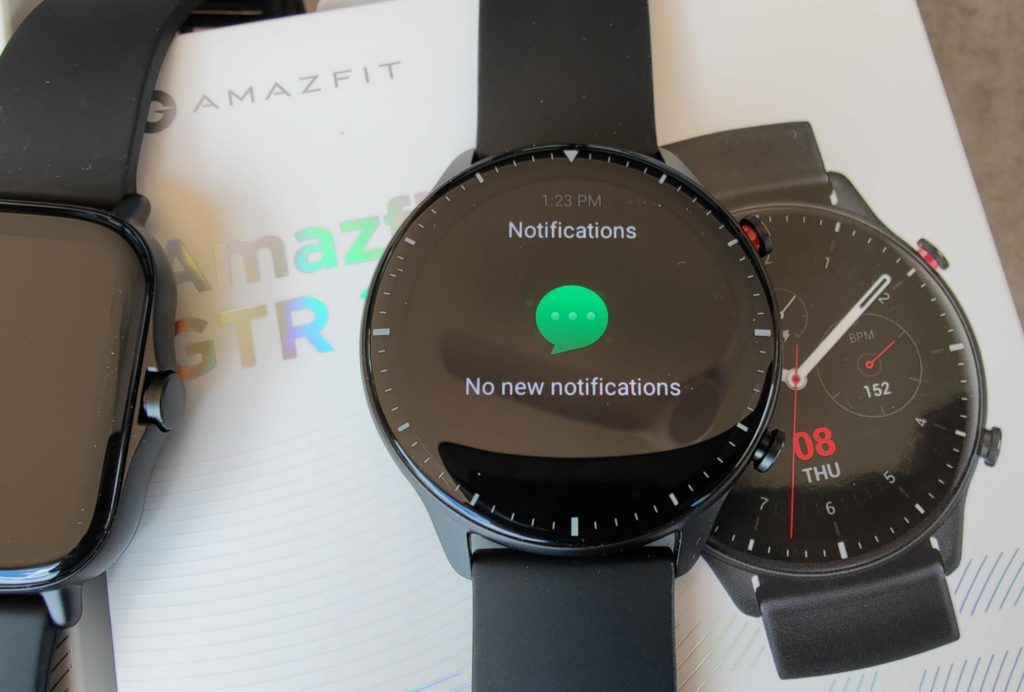 Personally I want more smartwatch interaction and as such it is not for me. If you want a very affordable, light, good looking fitness tracking watch with some smart capabilities and a long battery life then this may well be for you. The Amazfit GTR 2 is available in a sports (black) style and a classic (silver trim) style while the GTS 2 is available in black, grey and gold variations.

Amazfit has allow us to keep these smartwatches to monitor updates

These appear to be running the Huawei watch OS, the 2 button setup, phone app, and watch UI are all identical to my Huawei Watch GT 2. It does seem you are not the target market – I bought mine as I wanted notifications and occasional run & cycling tracking on a watch that looked ‘normal’and didn’t need charging every few days. It exceeded all those expectations (does a good week between charges!), but the biggest surprise for me is how much I love answering a call on the watch. After using it, it’s become a must-have feature for me;… Read more »

Tried to follow the links to the “Australian stores with them” but it seems like TecoBuy (and TobyDeals) have closed their Australian operations.