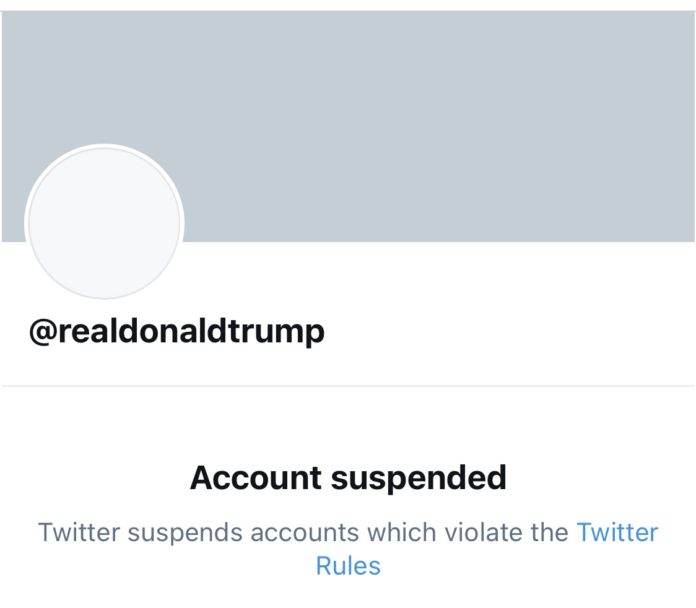 Finally, after all most four years of the Trump presidency, the social media accounts of the soon-to-be former US president have all but been removed, with Twitter finally announcing the removal of Trump’s account.

After close review of recent Tweets from the @realDonaldTrump account and the context around them — specifically how they are being received and interpreted on and off Twitter — we have permanently suspended the account due to the risk of further incitement of violence.

The move comes after Facebook did the same for Trump’s accounts on Facebook and Instagram, after widespread condemnation of Trump’s public incitement and support of the US Capitol riots earlier this week.

In further news, the Parler social network which bills itself as an “unbiased” alternative to the more mainstream social media options, has been removed from Google Play, and given 24 hours to clean up its act before removal from Apple’s App Store.

Parler doesn’t have a moderation policy – making it the perfect haven for right wing nut jobs – and numerous posts inciting the kinds of violence we’ve seen in the US have drawn Google’s further scrutiny.

As someone shocked and horrified by the events that unfolded this week, I’m glad that – finally – the tools of Trump’s influence are being denied to him.

There is an argument that private companies shouldn’t censor public discourse in this manner, and to an extent, I’d agree. However, when you look at Trump’s track record here and the totality of his public statements and actions especially in the last couple of months … well. He won’t be missed.

During these times it is important to show case the best we all have to offer. While comments intended as humour, satire or sarcastic may be made in ‘good fun’ they serve to only fuel the divide that has been forming.

Ausdroid believes in fairness, equality and equal rights. This should be evident from our public support for movements such as women’s reproductive rights, black lives matter, and same sex marriage.

Please stay respectful with comments at all times.

Ausdroid Media, the Editorial Staff and Writers do not support calls for any acts of violence. We ask the OP to amend their comment, or it will be removed.

During these times it is important to show case the best we all have to offer. While comments intended as humour, satire or sarcastic may be made in ‘good fun’ they serve to only fuel the divide that has been forming.

Ausdroid believes in fairness, equality and equal rights. This should be evident from our public support for movements such as women’s reproductive rights, black lives matter, and same sex marriage.

If you are deleting my comment, have the decency of tell me why you are doing it? You have turned a technical site into a political one by posting this article. Have the courage to post opposing views. You can still be a coward and delete this comment too. You know that I’m right, you are deleting my comments just because my views support EQUALITY FOR ALL, not just for you and your kind. Have some shame. You let a person suggest murdering Trump, but not allowing me to even say that he is WRONG. I’m done with this Biased… Read more »

as per previous posts, all new commentors are auto flagged for moderation. All comments without links have now been approved. We agree there is space for respectful discussion from all opinions, that’s the pathway to tolerance and understanding.

We do not condone calls for violence at any time for any reason.We are fairly sure that neither dbareis or his followers will in fact attempt to lynch Mr Trump however.

It doesn’t stop us from wanting to see him be found guilty and for him to be imprisoned for life.
Life sentence meaning the remainder of his life is spent in prison.
No parole to be ever permitted.
He goes into prison on his own two feet, forcibly frogmarched in, if needs be.
He does not come out, ever, at all, even in a pine box once he does kark it.

Oh Great. Please keep on deleting my comments as they do not agree with your Political views. Crub FOE here too.
I’m not saying ANYTHING to incite violence. Just asking to give equal footing to everyone.
If dbareis can ask for Trump to be suspended from rope, I an at least point out that this is WRONG.
Asking for murdering anyone is WRONG, your site is supporting it.

Hi Abhay, comments with links will automatically be marked for moderation and trashed by the software we use. Further more anyone who is posting to the site for the first time is automatically flagged for moderation. Unfortunately due to the unacceptable nature of other peoples posts in the past this is an editorial decision we made to keep the chat clean. We agree that your comments were not an issue. We have now approved comments without links. Unfortunately everyone in the team had a day off on Sunday or were under mandatory COVID quarantine and did not check the moderation… Read more »

Above is a peaceful and tolerant demand that leftist will applaud.
But Trump is bad ??

The suspension was carried out 6 years too late.