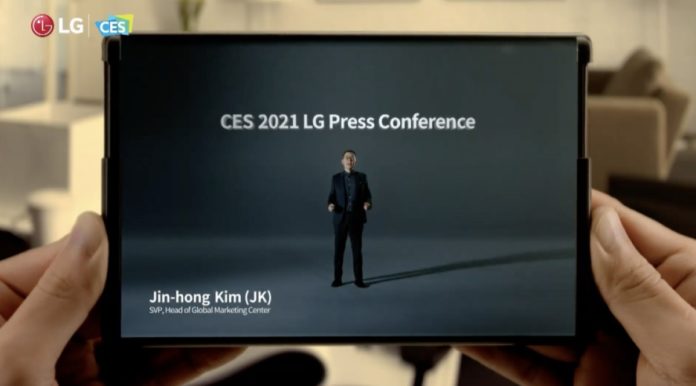 LG made a lot of announcements at CES 2021, here’s a roundup of some news that’s of interest to Ausdroid readers:

LG’s Project Explorer continues and it’s second device will be a rollable phone which made an appearance at CES, briefly demonstrating its unique resizable screen.

As the second device under the brands Explorer Project, this rollable device continues LG’s exploration of what the future of smartphones may bring.

The first Explorer Project device was the LG Wing with a unique swivelling second screen.

LG Australia has no information at present about whether either device will be sold in Australia.

LG has announced a planned partnership with Google to bring their Stadia cloud subscription gaming service to the company’s latest webOS smart TVs in the second half of this year.

After Stadia comes to Google TV, LG will be the first TV manufacturer to natively support Stadia gameplay via webOS.

LG plans to launch the new service in the second half of 2021 on LG Smart TVs as a downloadable app from the LG Content Store in countries where Stadia is available. Stadia already offers more than 130 games with more added regularly.

LG has announced webOS 6 for its 2021 OLED, QNED Mini LED and UHD smart TVs and a new Magic Remote.

LG Australia advises that it is 99% likely pre-2021 LG TV models will not get upgraded to webOS 6. However older TV’s from the last few years will often get access to new apps added to the LG TV Content Store eg: upcoming Google Stadia.

Magic Tap, a one-touch NFC function on the Magic Remote, provides easy access to a host of viewing possibilities. By simply touching an NFC-enabled smartphone to the remote, viewers can share content from their phones to the TV or vice versa. Users can view content stored on their mobile phones on.

Users familiar with webOS will immediately notice the updated home screen redesigned for enhanced usability and to meet the needs of viewers’ changing content consumption
habits.

The New Home screen provides faster access to the most frequently used apps ands streamlines content discovery with recommendations based on the user’s preferences and viewing history.

The new Next Picks feature analyses viewers’ preferences to discover more content suited to their tastes. Using viewing history data, Next Picks recommends two live programs from broadcast or set-top box offerings as well as one VOD title or app based on viewers’ liking, saving viewers the time and hassle of finding what to watch next.

Of course being LG they also had lots of announcements about whitegoods, computer monitors and other products. All the information about these is at the LG CES 2021 website.