Home Mobiles A look at the G-Mee Connect and impressions from an 8 year... 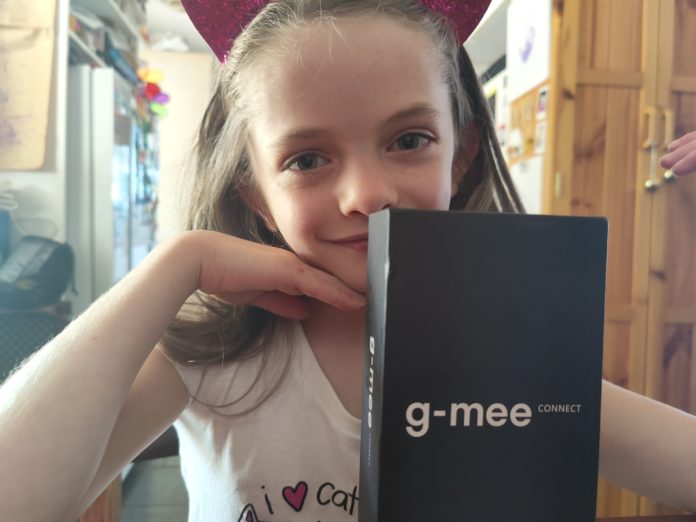 Several of the team at Ausdroid have young kids, so the G-Mee is a project that caught our attention. The premise is simple, it’s a phone aimed at kids: But it’s got some clever additions and omissions to be able to honestly say it’s well-targeted to that demographic of potential users. One obvious point is the price, retailing at AU$149.00 the G-Mee Connect is far from a pricey offering and clearly, has some low-end specs. Honestly, that’s all fine because this isn’t aimed at needy teenagers who must have the latest and greatest – it’s an introduction to mobile devices and the online world. The theory is, this is your child’s first phone. It has some relatively low-end specs (some of which seem to be fairly closely guarded), an acceptable (but far from great) screen and no camera. The screen itself is plastic which, you really can feel the difference but it’s undoubtedly more robust than other options.

G-Mee list what they call “key feature” and there’s a fairly clear theme of parental control and protection of your child. Starting with the fact that there’s no camera: it’s to remove the potential of kids “oversharing” or the horror of your child on a video call walking in while you’re changing… Laugh as much as you like, I know people this has happened to.

You’ll have access to the Google Play store to install the apps of your choice, but there are a couple of things to keep in mind. The first is the power of the phone, it’s installed with a number of Google “Go” apps to reduce the processing weight on them. The other is that you’re pretty restricted in storage: Only offering 8GB onboard and up to 32GB extra via MicroSD. Probably the biggest inhibitor to performance is the lack of — total 1GB — RAM.

The parental controls take several steps further than the Family Link provided by Google including:

From general connectivity, the G-Mee ticks the basics and that’s about it. Obviously, it has a SIM slot for calls, SMS and 4G data. It’s got Bluetooth 4.0, Wi-Fi 802.11ac and a headphone jack all running on Android 9.

There’s a theme here that most readers will already be aware of, the basics are in the box. The device, charger and cable, earbuds and — a nice bonus — there’s a clear plastic bumper case.

I’d love to be able to give you more o fa comprehensive look at the device. But the news of a “kids phone” being in the house, got my youngest’s attention. From my perspective, it ticks the boxes for a basic phone and gives the functions you’d expect:

Given she’s spent more time using the phone than I have, I thought I’d get some extra input.

Impressions from an 8 Year Old

Hi everyone,
I’m Jenny, Phil is my Dad. We got the G-Mee phone on Tuesday last week, my Mamma (Jo) helped me set up the phone and put a code on so people I don’t know can’t use my phone. Then we put some apps on and put it on to charge. It was fun and pretty awesome to have a new phone to use. What I liked the most was the sound is good, bright and loud for my games and the screen was nice and bright, and easy to read. It’s a good size for me to use too because Daddy’s phone is too big.

This is just quick look at the initial experience we have had with the G-Mee Connect. A more in-depth look will be posted in a few weeks time, looking at the user (kids) experience and the parents perspective of control and monitoring kids online and mobile activities.

If you were looking at a first phone for your kids, what features would you want to be included and what would you like to avoid?

Looking forwards to reading your more complete review on the phone, Jenny 🙂

Good to see the extra large Milo tins sitting on top of (what appears to be) a slab of boutique beer. My 2 favorite drinks!!