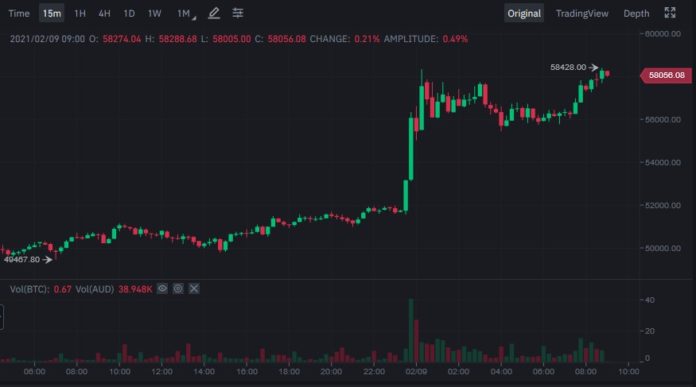 If you were invested in Bitcoin yesterday, then you had what most would call a Very Good Day. Bitcoin surged to its highest levels ever – topping $58,497 AUD – on the back of an announcement from Tesla that it had acquired $US 1.5bn in Bitcoin, and would soon accept the currency as payment for its range of electric vehicles.

The volatile digital currency is fast on its way to becoming a mainstream payment option with Tesla’s announcement. It wasn’t easily found, though, deep inside Tesla’s 2020 annual report. When the markets found the information, Bitcoin surged – it added as much as 13% value in an hour or so – bringing a single Bitcoin to around $58,500.

In the US, the coins are valued at $44,000 and as the ABC reports, that’s more than enough to buy an entry-level Tesla Model 3.

With Tesla leading the way, predictions are other companies will soon begin accepting Bitcoin as payment too, with big names like Square and PayPal considering a move into cryptocurrency acceptance, too.

Growing acceptance will add validation to the cryptocurrency, giving weight to the argument that it’s valid, valuable, and that it can be used for actual real-life transactions.

It’s interesting timing, though, with some wondering whether the announcement was carefully timed to pump the value of the currency, increasing the value of Tesla’s holdings (and others). It wouldn’t be the first time; we wrote just the other day about how a tweet from Musk sent the price of Dogecoin skyward too.

The move into Bitcoin isn’t a small one for Tesla, having shifted some 8 per cent of its cash reserves into Bitcoin as part of a broader investment policy. With $US 19.4bn in cash and like reserves, that’s a big investment indeed.

What are all these posts about cryptocurrency doing on Ausdroid? Clearly the author has recently gained an interest in it, but why push that on others on a site that has nothing to do with it.

We write about technology, and – like it or not – cryptocurrency is technology. It’s gaining a lot of mainstream news attention, and equally, it’s grabbing ours too. Besides, the previous stories in this category have been read many thousands of times, so while you mightn’t be particularly interested, thousands of readers are, so we’ll continue to cover interesting happenings.

But don’t worry, we’re not turning into a bitcoin / crypto blog. It’s just something that we’ll do every so often when something actually interesting goes on.

Thanks Chris. There are many areas of technology that you don’t cover so it seems strange to pick this. If you do continue with these though, then I do hope the article’s will become better and more accurate. There’s been some inaccuracies in each one so far. Just one example, the inaccurate information about Square and Paypal in this one. Might’ve been just because that was copy/pasted from ABC who also got it wrong, but it would be good if Ausdroid did indepentandly research these things before posting.