Home News and Editorial Facebook Messenger gets an artist makeover thanks to a collaboration with Melbourne-based... 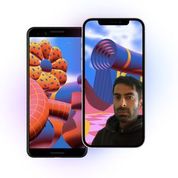 Facebook Messenger has announced that it is bringing a new way to experience the arts virtually, with a new initiative that features a collaboration with Melbourne-based artist and illustrator, Karan Singh.

The collaboration is the first for Facebook Australia partnering with an Australian artist, which will see Karan create a dazzling 360-background for Messenger Rooms and video calls. Karan is only one of 6 artists globally partnering with Facebook to bring the arts to users virtually.

Speaking on the news of the collorative partnership, Karan stated:

“Collaborating is always the most exciting part of any project. It’s the cross-pollination and sharing ideas where the best work comes from. This project offered the opportunity for me to create something in a 3D space that people can explore and interact with. My favourite thing is the sense of discovery, the way the space is revealed as you move around it.”

The launch is part of Facebook’s Open Arts project, which commissions original artwork for Facebook spaces, products and experiences, the series will see Messenger work with six artists from underrepresented communities to celebrate diversity, creativity, and vibrancy in the arts.

If you would like to try out this background in Facebook Messenger, all you will need to do is: