Home News and Editorial Samsung’s bringing the Awesome to the Galaxy A range – A32, A52... 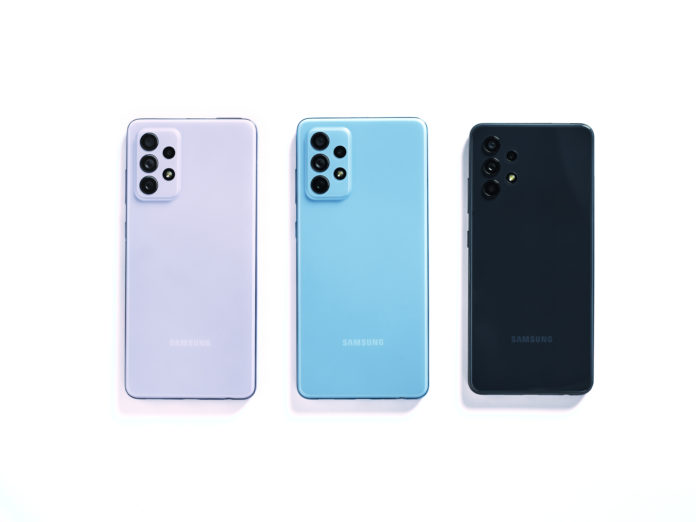 Samsung wants Galaxy A to be “Galaxy Awesome” and is bringing a new range of phones to market at wallet-friendly price points to get there. The new range of phones – five SKUs spread among three distinct models – starts at $499 with local availability from April 9.

The company says it’s seen big growth in sales in the mid-range on recent years, which makes sense – the Galaxy A range has been ticking lots of boxes in this section of the market for a while, and it intends to shore up this lead with the new phones – Galaxy A32, A52 and A72 (the bigger the number, the better the phone).

It’s hard to overemphasise the importance of this sector. While the premium (and ultra premium) handsets get the headlines, it’s the midrange where the majority of sales happens. Companies have been angling at this market for years, although marketing activities are directed more towards the premium handsets. With this in mind, it’s nice to see Samsung come out swinging for the midrange.

Despite the hardware upgrades brought about by purchasing habits during the COVID pandemic we know that people are holding on to their phones for longer these days, so Samsung says they aim to “future proof” these phones by packing them with the latest hardware for their price point and the range offers some great value in terms of screen, camera, processor and storage.

As prospective buyers look to spend less on their best handset come upgrade time, Samsung is looking to capture users with a value proposition that speaks to this consumer. These phones might be no-frills mid-rangers, but Samsung says they’re bringing the features that their customers find important. They’re offering some decent prospects, as we’ll see, and they’re bringing them in at some impressive price points.

The new Galaxy A phones start from just $499 (including a 5G model) and top out at $749 – above that, you’ll probably want to go for a Galaxy S model instead. The phones share a lot of common design with a single front-facing 32MP camera in the centre of the notification/status bar (with different notch/holepunch designs), powered by screen technology that – unsurprisingly – gets better as you move up through the range.

On the rear, there’s a modest camera bump housing four cameras (again, with different specs as you move up through the range) with some different materials in use across different models.

The shared design has a point, though – you might have trouble telling the difference between the A52 and the A72 at a glance, but that glance will tell you that it’s definitely an A-series … something.

Let’s take a look at the three models announced today. That’s not a typo – the 4G and 5G versions of the Galaxy A32 come in at the same price point. If you want 5G, you’ve got it, but the specs differ ever so slightly.

The entry level to the new A series offers a 64MP main camera (48MP on the 5G model) with an ultra-wide, macro and depth camera along for the ride.

On the front is a 6.4-inch Infinity-V Full HD Super AMOLED display – a big screen for the price point, and using the technology for which Samsung’s become known. It’s running at a 90Hz refresh rate to make the experience of using the phone just the little bit smoother. This is a little different on the 5G model with a 6.5-inch Infinity-U display.

It’s packing a 5,000 mAh battery and supports 15W charging. Samsung knows that this is probably going to be someone’s first phone, so there is a charger included in the box. It’s here that Samsung has offered the most choice, with some appreciable differences in specs as you move up from $599 to $749.

The display moves up to a 6.5 inch Infinity-O model on the A52, and the refresh rate moves up to 120Hz (if you pay a little more for the 5G model). The camera gets an upgrade too, with Optical Image Stabilisation added to the main 64MP camera. The A52 also supports 25W fast charging, but it’ll come with a 15W charger in the box.

The body of the device is now water and dust resistant with an IP67 rating, and there’s also better built-in speakers certified for Dolby Atmos. The camera sees an upgrade as well, swapping out the depth camera from the lower models for a telephoto lens supporting 3x optical zoom. This also brings Samsung’s Space Zoom into play, offering a hybrid zoom at 30x (although you probably won’t want to push it quite that far, it’s nice to have the option should you need it).

The A72 is the largest of the new range, clocking in with an expansive 6.7-inch Infinity-O display. Like the A52, it also supports 25W charging but this one comes with a 25W charger in the box. Samsung’s making some aggressive moves in this section of the market, and it’ll be interesting to see what happens in a sector often seen to belong to low cost Chinese manufacturers. Each of these phones brings with it Samsung’s “Galaxy Foundation” software experience with their One UI Android user experience.

There’s a few fun features that will be exclusive to the Galaxy A series, like Snapchat Fun Mode (A52 and above) that adds support for Snapchat filters running at the full resolution of the camera app you can save them to your camera roll. Samsung has had a partnership with Snapchat for a while that allows the app to take better advantage of the high-spec cameras that the company uses in its phones, so Snaps sent from Samsung devices should look better than those from other Android phones – maybe that’s important to you.

Samsung wants these phones to be that must-have spec bump to give the customers who might be looking for a reason to upgrade that little push to purchase.

The new Galaxy A series phones are due to hit Australian shelves on April 9 in Blue, Black and Violet colours. Prices range from $499 to $749.

We’re pretty sure we’ll see these phones widely available for outright purchase from retailers and carriers alike, as the Galaxy A series has proven popular over the last few years.

Samsung is offering a free pair of their fun bean-shaped Galaxy Buds Live in-ear wireless buds to sweeten the deal from April 9 to April 23 – that’s an extra value of some $300, although the price of Buds Live varies a bit if you shop around.

Extra value isn’t to be sneezed at, especially when you take into account the A32’s $499 price point. if you’re looking for another reason to go for that purchase, maybe this will be it.

Will these devices have the four years security updates and will they contain ads that Samsung have increasingly infected their phones with?

Samsung could _very easily_ make these A series devices doubly awesome, simply by not putting their unwanted and unnecessary bloatware on these phones. This is an incomplete list of Samsung apps which are clogging up my Samsung Galaxy Tab S6 Lite, and which are known to be also on other Samsung devices. Samsung Knox, Bixby, Weather, Cloud, Device Health, Keyboard, Daily, Home, Clock, Calendar, Calculator, Contacts, Gallery, Video editor. It’s odds on this garbage and more will likely infest these upcoming A series devices. It’s been said, many times over the past decade that Samsung make good Android devices, which… Read more »

The range is a bit of mess specs and price wise.

My guess is that for the a72 5g, they’ll be waiting for the 775g to launch so that they can put that in it.