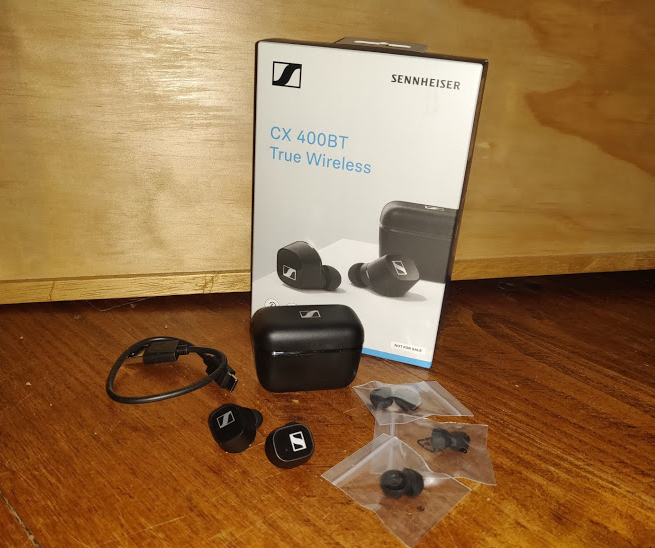 Sennheiser is a well known German company, in business since 1945 they have a reputation for quality products and sound engineering.  The CX400’s were initially introduced at a $300 price point, but can be found in many retailers now for $150.  The earbuds come with a charging case, a pretty short (20cm) USB C charging cable, and 4 different sizes of ear tips. Setting up the CX400 buds was easy, connecting to the initial device is automatic – switching to a different device requires a 3 second press to both buds to trigger pairing.

The buds themselves are not the most aesthetically pleasing shape, they are simply square, however, their large flat surface makes the touch controls reliably easy to use, and it’s nice to see a manufacturer prioritising function over form when so many do the opposite.

The charging case is small and light but it isn’t shaped to fit conveniently in a pocket, it feels a little plastic-y but does feature an indicator light on the back to show the case’s level of charge. It was fairly easy to change the ear tips but getting the buds situated in the ear can require a little finessing. They are supposed to twist into place, but I found I had to do some adjusting each time before the fit was comfortable.

These units are not water or sweat resistant, making them unsuitable for anything other than a light workout, 5 minutes of skipping resulted in the earbuds working themselves loose from my ears and falling out multiple times.  The Sennheiser website touts these buds as ‘perfect for on the go’, just don’t go jogging or be outside if it’s raining.

It must also be noted that these units use passive noise cancellation only – not active.
They rely on a snug fit to block ambient noise which I found worked, but for it to provide the best sound result – in listening and reducing ambient noise – I needed to use the medium size ear tip. Unfortunately for me, the small-sized tips were what ended up being the most comfortable for long term use.

The smaller sized tips were comfortable for a good 3 hours before I felt the need to remove them – but with the medium size, I only managed around 40 minutes.  Having said that, I’m new to earbuds and my tolerance for them may well increase over time.

In terms of sound quality, the treble and mid-tones come through beautifully, the base is perhaps not as rich sounding as you might get from a set of over-ear headphones, but given the size of the units creating the sound, it’s quite an impressive effort. The overall sound comes through clearly and crisply when listening to both music and audio narration.

As a small point of note, and this may well be true of any earbud or over-ear headphone, I found that eating anything crunchy while using the earbuds meant that it was impossible to hear the playback.

In particular I listened to
My mother told me by Voiceplay
Making an epic hourglass featuring music from Lukasz Kapuscinski by Epic Workshop.

While using these earbuds I did find that there is a notable delay between a tap of the controls and the resultant action. It’s a solid 2 – 3 seconds before a video pauses or restarts, or for the google assistant to respond, just long enough for you to wonder if you did actually tap correctly and go to tap them again. I did also note that on some video playback the sound and video was slightly out of sync, only by a second or so, but enough to notice.

Given their price point, the Sennheisers produce an impressively high level of sound quality. This is done in large part via dynamic drivers which use magnetism to move a flexible diaphragm that creates air movement to produce sound.
The CX 400s have 7mm drivers, which aren’t the largest available in earbuds, however, while a larger driver will deliver more sound and bass, it doesn’t always equate to better overall sound quality. 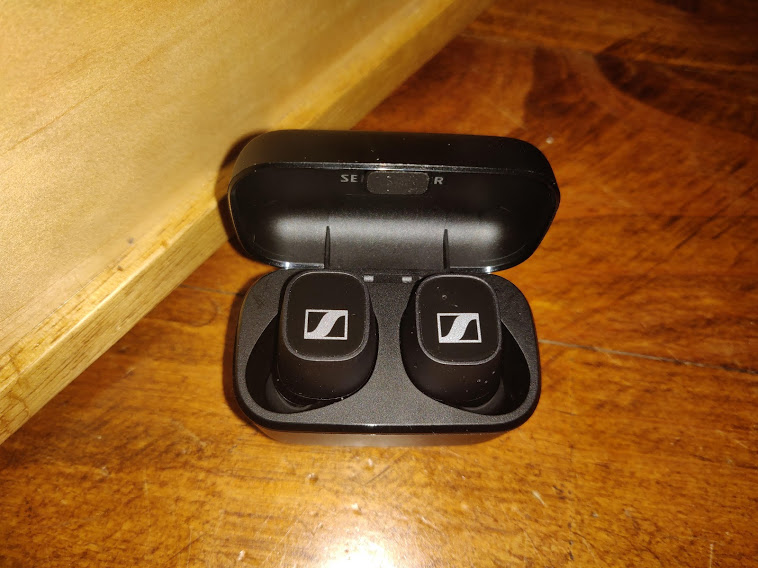 The CX 400’s are Bluetooth 5.1 compliant, which isn’t always to be expected in the $150 price range, and have an app to allow for EQ and touch control modification. That being said it’s unlikely that most users will adjust these settings once they have settled on the ones which suit them.

The advertised 7 hour battery life is achieved by having no customised EQ settings, having the BT attached phone remain within 1 meter of the buds, and keeping the volume under 50%, deviate from this and you may find the battery life may not make it the full 7 hours.

Sennheiser states that it should take a maximum of 1.5 hours to charge the case fully, and 10 minutes of charge will be enough to provide 1 hour of playback time.

Putting the buds back into the case is easy – the magnetic charger settles them automatically in the right place. One thing to watch for though is there’s no off switch on the buds, they deactivate once they are set into the case but if you tap them while putting them in you might find you have accidentally activated your assistant or skipped an audio track.

The CX400 earbuds provide exceptional sound for their price, they are light, easy to use and their only real drawback is they are not best suited to exercise with. The Sennheiser CX400BT True Wireless Earbuds are available from all the regular online and
in-store retailers.

Due to hygiene reasons, the device has not been requested for return.