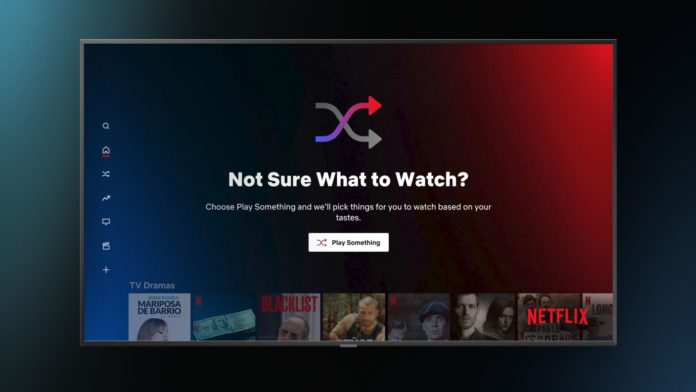 Sometimes you just want to open Netflix and dive right into a new story without scrolling through options for 15 minutes first.

There are times when we just don’t want to make decisions.  A Friday evening after a long work week.  A fridge full of food but nothing jumps out.  A family movie night where no one can agree. We’ve all been there.

That’s why Netflix has created Play Something, an exciting new way to kick back and watch.

If the Netflix algorithm gets it’s guess right when you hit the “Play Something” button, you’ll be instantly met with a series or film they think you’ll love based on what you’ve watched before. Or with one more click you can “Play Something Else” and get:

And to keep it easy, you can find Play Something in multiple ways on your TV:

I can already see the new “Play Something” feature on the Netflix app built-in to my Hisense TV.

When I pressed the link it started playing the new series Shadow & Bone which is a good guess at what I like.

Please let us know in the comments once you’ve tried it out and whether the Netflix algorithms guess was good or bad.

This has been a thing for months now hasn’t it?

I can see it but haven’t tried it yet.