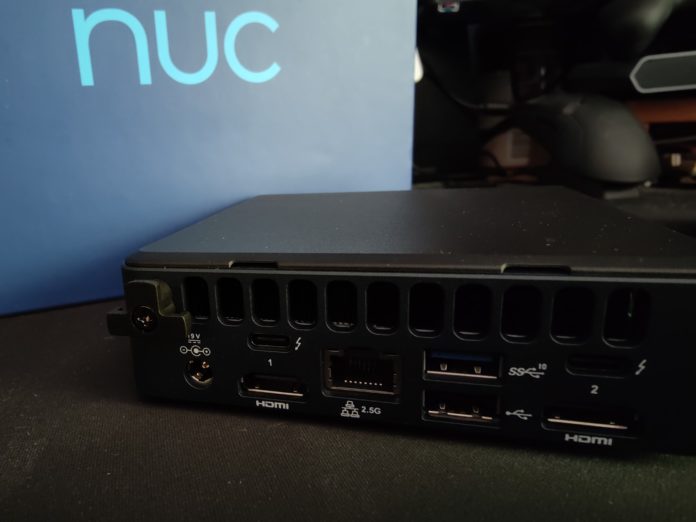 This time last year we took a look at the NUC10i7FNH (a mouthful I know) which is a tiny but mighty workhorse. Very powerful in terms of specs and quite mighty from a capability and productivity standpoint. This year we’ve had the opportunity to put the latest generation Tiger Canyon NUC on the test bench to check out the evolution of the platform.

It’s worth reiterating that the NUC devices in this particular range don’t have dedicated or “discrete” graphics, which means that; while they’re good for most applications, gaming is probably a step too far for them. But when you’re dealing with a device that literally fits in the palm of your hand, it’s difficult to — fairly at least — expect gaming performance from it.

To put the cards on the table from the beginning, the NUC is not a “cheap” option. If you need a budget option and have the space for it, then a white box PC is probably a better option. But the NUC offers something that a normal PC doesn’t; massive space-saving.

The specific review unit we received is a NUC11TNKi5 that offers some really solid specs. Generically though, the NUC has some consistent pro’s and cons from las year that cover: Taking out the variables with the various models of NUC, there’s a couple of things that you need to consider when buying one. Obviously, the specs you need from a processing perspective, but you also need to have a think about the amount of RAM and storage you want because they’re supplied as a barebone system which (in the case of our review model) will cost around the AU$650 mark. Out of the box, they’re running the latest generation of Intel Core processors, integrated graphics and a good range of connectivity. Our review unit came with 32GB of memory and a 512GB M.2 SSD installed, but these would be an extra cost as is the OS at a retail level.

The NUC has reduced in size again this year, now down to a relatively minuscule 117 x 112 x 37 mm. This is just stupidly small, smaller than a router in fact and the power use is barely worth noting, unlike the comically large power brick. I’d really like to see next years NUC come with a far smaller power option and run on USB-C instead of a proprietary option.

Connectivity, daily use and performance

I ran the review of the NUC side by side with the Aten 2-Port USB-C dock a week or so ago. So the NUC only had two cables out the back of it: USB-C to the dock and power, everything else was plugged in through the dock. If you’re running one of these as a stand-alone device that won’t be the case for you but investing in a wireless keyboard and mouse for flexibility and to minimise space use would be a great step to maximising the benefit from such a small device.

I’d suggest that in comparison to last years model, there’s a bit of a drop in the connectivity range offered as there’s no SD card slot. In reality, I’m not convinced it will impact many buyers for a machine with this physical footprint. They’ve also increased the number of USB and USB-C ports on the rear of the device, so perhaps rather than a drop in connectivity: It should be viewed as a modernisation of the connectivity options. There’s a couple of USB ports on the front, two on the rear, a couple of USB-C (Thunderbolt) ports, a couple of HDMI (giving you the ability to connect up to four monitors) and a 2.5G ethernet connection. That’s a whole bunch of connectivity, but when you throw in the capabilities of the USB-C ports to connect pretty much anything, this is a beast and you’re on a winner.

You can minimise wires to the NUC if you want to since it’s got Bluetooth 5.0 and Wi-Fi 6 connectivity included. So, in theory, you could hide this under a desk, only having the power and video cables plugged in with a wireless keyboard, mouse and Internet connection.

Day to day, the NUC is nearly silent which is awesome if you’re using it as a small form factor workhorse. When you load it up and start making it work hard, that’s a bit of a different story though. It’s nowhere near as noisy as my gaming PC, but when I was messing around with some audio encoding — holding the CPU at high utilisation for periods of time — the fans were clearly audible in the room.

For me though, the day to day performance was a standout feature. Simply put, in my normal workflow nothing really stressed it including:

This gave me quick access to everything I wanted and needed, minus the fact I could just pick it up and move it when compared directly to my laptop.

NUC as a daily use option: Should you buy one?

While it’s not heinously expensive, this isn’t a cheap option if you’re looking for a desktop workhorse. In fact, you’ll be able to pick up a very capable desktop machine from a retailer for less than the barebone kit of the NUC will cost you. But a piece of hardware like the NUC isn’t about appealing to the masses, it’s about filling a space in the home and business markets. The Tiger Canyon NUC has achieved literally everything I’ve asked of it, without really being taxed at all and that alone is impressive. The fact that it’s so small, performs well and — short of gaming — does everything means there’s a definite place for this one in homes and businesses. There are multiple bonuses outside of the space-saving, such a the power efficiency and reasonably comprehensive connectivity options.

Depending on how far you want to spec out the NUC, you’ll probably get a bit (not a lot) of change from a grand but still need a keyboard, mouse and monitor if you don’t already have them. If you’re in that market segment looking for a small form factor workhorse machine, I’ve been so impressed with this I honestly wouldn’t hesitate to recommend it to someone provided they have the budget.

Really want to get it into my pc

“If you’re in that market segment looking for a small form factor workhorse machine, I’ve been so impressed with this I honestly wouldn’t hesitate to recommend it to someone provided they have the budget”