As a laptop user goes, I’m not exactly all that demanding. Fact is, aside from work, I don’t really use a laptop much and my “demands” (such as they are) are pretty basic. I want something that works, that’s powerful enough for what I need to do, and that’s sturdy and can withstand a day in my life (i.e. being thrown in a bag, brought out for work, thrown back in the bag, bag being thrown in the car, and repeat).

I’m not a gamer, I don’t do video production, I don’t consume a lot of media on the laptop. I get my work done, and that’s about it.

So, why would someone like me – or anyone, really – choose a Microsoft Surface Laptop 4? Well, it’s an easy choice. For starters, Microsoft’s Surface range has never really been about being cheap; you may a little more for a big brand product, and it’s as true in laptops as it is with mobiles, cars, and just about everything else.

However, what you do get is definitely worth what you pay for. The model I’m reviewing is the Intel Core i5 variant, with 8GB RAM and 500GB SSD storage, and it retails for $1,999. 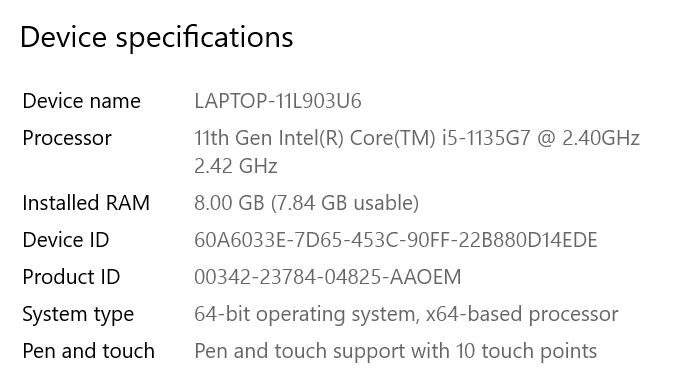 As you can see, while it might be the little brother to the more powerful Core i7 processor, the 11th generation i5 is no slouch; as I noted in the prelude, this feels every bit as fast as an older i7 that I’m thinking of replacing – and that means it’s quick. It might not be quite so good at super tasks like video encoding or high performance gaming, but as I don’t do either of those things, who cares.

For those who are into gaming, there’s an AMD Ryzen Mobile variant with Radeon graphics which might be more your speed.

This one, though, has a 13.5-inch display with a beautiful resolution of 2,256 x 1,504 (that’s a 3:2 ratio) which is perfect for reading and working on two portrait documents at once (e.g. reading a technical manual and writing a report at the same time). There’s a 15-inch model too in most variants, if that’s more your speed, but they’re a bit bigger and heavier … and to be honest, I don’t need nor want that.

The model I’m reviewing is a black aluminium frame, but there’s a range of finishes on offer, including Platinum, Ice Blue, Sandstone and Black. The first two come with an Alcantara soft-touch keyboard, and the latter two a brushed aluminium affair which (for me) is much more premium. The Surface Laptop 4 is razor thin at just 14.5mm, and it weighs next to nothing (1.25kg) so it’s not issue carrying it around an office in one hand, throwing it in a sling bag, or carrying it in a backpack. Some might say the Alcantara is the more preferable finish, but my day job has me working in places that aren’t your typical office, so something a little more hard wearing is my speed.

The keyboard, to me, is just beautiful. It has just the right amount of travel and click, without being onerous to use for extended periods. The touchpad, below the keyboard, is a great big size and easy to use (and avoids accidental touches when typing) making it a joy to use even without a mouse (though typically, I use a mouse just about everywhere).

Out of the box, you get Windows 10 Home, and the latest build of it too – but you’d expect that on a laptop made and sold by Microsoft. Again, to be honest, I’d probably prefer Windows 10 Pro, but you can easily update Home to Pro if you need it.

If you don’t already have a Microsoft Office subscription, you can install a trial of Office easily enough, and if you sign in with an account that has an active subscription, your apps will be enabled and ready to use. In my case, I don’t pay for a personal O365 subscription anymore (as my work provides one) but it’s a small price to pay for useful apps if you’ll use them.

Other great features of a Surface device are seamless Windows Hello which unlocks your laptop just using facial recognition, which can save a lot of time if you’re frequently taking out and putting away your laptop (e.g. moving between different places).

What are the downsides?

Connectivity is a big one. While Surface has come a long way since including a Surface Dock port and nothing much else, the inclusion of just one USB-C and one USB-A port feels a bit lacking in 2021. My Lenovo Thinkpad (which is on its last legs, poor thing) has two USB-A, two USB-C, a network dongle port, HDMI out, and a 3.5mm headset jack. It means that if you don’t want to use a dock, you don’t really need to. With the Surface Laptop 4, you’re really going to want a dock for your desk, even if you can get away without one on the go. There’s just not enough ports. The good news is that the USB-C supports my favourite dock which gives me two displays, plenty of USB-A and -C ports, network connectivity and more.

Unlike the Thinkpad, the bezels on the Surface Laptop 4 aren’t exactly slimline (like the rest of the laptop). In fact, they’re a bit chunky, and one can’t help but wonder if a slightly bigger screen might’ve been a better use of that space. The top bezel, at least, kind of needs to be there to contain the web camera and Windows Hello IR sensors, but the side and lower bezel could be smaller, making that 13.5-inch display closer to 14-inch in the same frame.

It’s a minor point. I find 13.5-inches perfect on a laptop, and coming from a 13-inch laptop, this feels positively larger anyway.

Besides this, there really aren’t any downsides. The aluminium case does mean that if your laptop does happen to take a fall – as this idiot managed with this review device – then the case is going to show some signs of wear pretty quickly. In my case, a small fall from an accidentally unzipped laptop bag meant the Surface Laptop 4 hit the road, and while it didn’t break anything, it did scuff up the case a bit.

Reality is, that’ll happen with any laptop (or smart phone, or anything these days) but the smooth, polished aluminium is a little slippery. You’ll want to be careful, that’s all I’ll say.

Overall, would you get one?

The short answer is probably, yes. I’ve used a couple of Surface devices over the years, including an original Surface, a Surface Go, a Surface Book, and now a Surface Laptop, and I’ve pretty much loved each of them. There’s something about buying a first-party product for use with the paired operating system – Apple’s iPhone has iOS, Google’s Android has Pixel phones, and Microsoft Windows and Surface go together just as well. I’ve had good experiences with other laptops, too, but this just feels like the way the two products are designed to work; together, in harmony, well designed and integrated.

Surface products – including the Laptop 4 – are hardly cheap; while you can get into a Surface Go for a little over $600, it doesn’t come with the keyboard (which’ll cost you a little more). The Surface Laptop Go 2 range can get you into a more traditional laptop style machine for under a grand, but with 4GB of RAM and just 64GB of storage, it’s not really a suitable machine for work. It is, however, a perfect option for your kids.

For me, and for anyone looking for a serious work laptop, the Surface Laptop 4 range is just right, with just the right mix of power, RAM and storage to meet your needs. Starting at $1,597 (for an AMD-powered, 8GB, 256GB storage arrangement), the price quickly jumps up to around the $2,000 mark for an i5 with 8GB RAM, or you can save a little by opting for an AMD and 16GB RAM instead (though slightly less storage).

I’d wager, though, that most of you don’t need that, and you can get a Surface Laptop 4 perfect for your needs for quite a bit less.

I’d thoroughly recommend one of these, and as we approach tax time, it’s the perfect time to go buy one and write it off on your next tax assessment if you can use it for work.

Microsoft could have taken a leaf out of cellphone design, and used wide bezels top and bottom for electronics, and slim bezels left and right, where they don’t need the thick bezels.
Chris, is the SSD or RAM in the Surface, upgradeable?