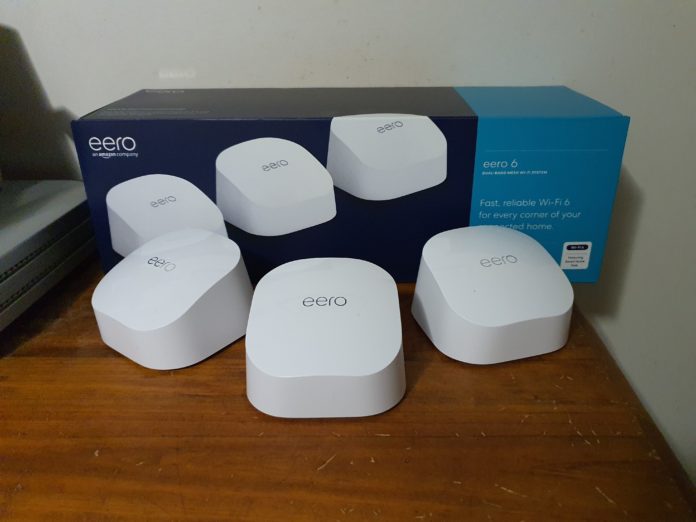 With our homes becoming smart(er) and also our work from home offices, having a strong Wi-Fi network is pretty important and whilst stock standard normal Wi-Fi units we get through our telco’s can do some of the work they can struggle with everything connected in the home.

That’s where the eero 6 Wi-Fi mesh network looks to improve things and make things easier for you to keep an eye on your network but also keep you and your family secure as well.

So, how is the eero 6 Wi-Fi Mesh Network able to handle what our connected lives and houses currently throw at our Wi-Fi networks, let’s have a look shall we.

Opening the box, there are 3 eero Wi-Fi devices, along with 3 USB-C to power plugs and cords, Ethernet cable which is about 1m in length and an instructional booklet.

The eero 6 is a mesh Wi-Fi network, where there is the ground base, with 2 additional satellite bases which repeat the internet signal around your house/property to ensure you have the best internet speed and connectivity as possible.

In the box reviewed there are three eero devices which are made of a plastic polymer housing which seems to have an almost metallic base.

There is a single LED light on the front of each device at the front top, whilst at the rear each device has a USB-C port located in the middle of each unit, with one of the devices also offering two ethernet ports (1 on the right and 1 on the left) of the USB-C port.

Set up is based around the eero app which is free to download from either the Google Play or iOS App stores respectively and signing into the app will require using your email address or if you have an Amazon account, you can also use this.

Secondly there was an app update which happened a week later, I noticed the app logged me out and again had issues trying to sign in and again I had to contact Amazon directly again to fix this.

Once I connected the main eero router to the NBN router, which in this case was my Telstra smart modem as I could not connect it directly into the black HFC NBN box, you will have to connect other eero devices via the app separately as part of the same network.

I have to say that I am very surprised as it seems to have enabled a strong network connection especially through our telstra TV and Vodafone TV streaming/set top boxes, which would normally disconnect if we didn’t use them for a few hours, requiring restarts when needing to use them.

I also noticed the speed from the eero network was faster than going directly through our Telstra smart modem (which does offer 4G connection that never works when this option is needed) and the screenshots from the speed test prove this. I also like the control you have within the eero app which does give you the option to check what devices are using your network, the usage from each device and to have a weekly report that gives you a snapshot of your usage is worth the ease of having an app that can break down every bit of usage, uploads and downloads, despite the flaws of trying to log in that I had, make it worth consideration.

The one issue I mainly had some problems with, was trying to move our smart lights over to the new eero 6 mesh network. In the end I just decided to keep these on our current Telstra Wi-Fi network so they remain separate.

Also, when trying to log into my Amazon account to use it, I did have a few issues requiring me to contact Amazon. Whilst the staff on the support line were friendly, I was bounced around a couple of times which I think could have been simplified.

There’s an app and subscription for that

eero has a subscription service which enables you to keep track of your network along with every device that is registered on the network, where demand is coming from, the threats, ad blocking, advanced security measures and abilities.

eero network set up from the app

As part of the subscription cost and settings, you can also do content filtering which lets you set up individual profiles and set those users profiles so they can opt to access certain websites or have limited viewing abilities.

The fee is approximately $4.99 a month, which isn’t a lot. However you can still use the devices without a subscription but this is a very good option should you have kids or grandkids and don’t want them to have access to every website.

I have to say that I was impressed by the eero 6 Wi-Fi mesh network extender as it did what I believed was promised – making connections faster, stable and easier to use.

Yes there were a couple of issues pertaining to moving our IoT/connected lights and smart home products, they still were able to be turned off from the Google Home app directly if my Google Speaker wasn’t working properly or having issues.

Alongside the sign in issues which were bad, just a slight annoyance on my end, I would recommend the eero 6 Wi-Fi mesh network.

Amazon link is for the older model, and eero website link is in USD and no shipping to Australia.

Hi David and apologies for incorrect links. Have removed these entirely