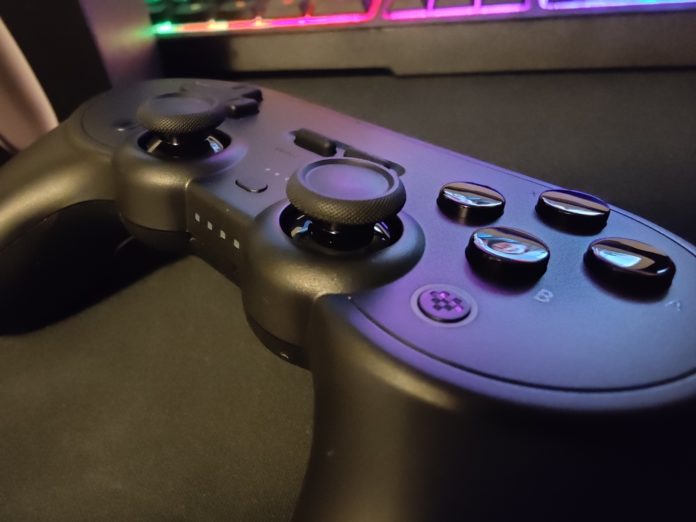 Console, PC or mobile platform games play a big part in the recreational lives of many. It’s this — in part — that has played such a big role in eSports now being a multi-billion dollar industry. But for those of us who are perhaps past our peak for gaming performance, only wanting a casual gaming device spending hundreds on a controller isn’t attractive.

The 8BitDo SN30 Pro 2 controller is really versatile in connection and costs only $89, making it a very attractive option for users who aren’t in the elite market.

It’s a game controller, but its connectivity range results in it being a single option for all of your gaming needs. Capable of connecting to Windows (works very well on Steam games), Mac, Android, iOS, Nintendo Switch and Raspberry Pi for your gaming needs. Where some other hardware has a distinct look about it, this has a generic “game controller” look. The connectivity deserves a little further exploration for a number of reasons. Because it can connect via Bluetooth or USB using a detachable cable, you’ve got quite a versatile offering. But where it gets really impressive is the built-in profiles on the device which are individually programmable via a PC interface. So you can map buttons as you need to for different interfaces for your various devices as required. For gamers used to controllers of this type, there is a bit of a problem though…

The ergonomics aren’t quite right

There are plenty of buttons but compared to what would be considered the current generation of game controller the ergonomics aren’t quite right. Specifically, on the left side, the thumbstick and d-pad are the wrong way around. At least they are for the games I most regularly play — primarily racing and sports — which use the left thumbstick heavily for movement.

Technically I know there’s not right and wrong, this is a design choice made by the 8BitDo team. It tells me that their design choice was to focus on players more likely to engage with arcade-style games, that require digital movement vs the granular control of analogue.

The other area where the SN30 Pro 2 doesn’t quite feel right is that the hand grips are almost parallel, where the more advanced controllers are angled in. For shorter gaming sessions, not an issue but after a while, I found this created a bit of ache in my wrists. The alignment of the handgrips also meant that I was “reaching” for the central buttons more than other controllers I’ve used.

Everything you expect and a couple of extras

Putting the grumbles about layout and ergonomics aside, there are plenty of buttons on the controller. The buttons on the rear of the handgrip are very useful when playing online games requiring a push to talk button or racing sims where you need to change gears. Probably the only thing missing for gamers is a connection for a headset which you get on many game controllers these days.

The ergonomics of this controller have already been explored and initially, that caused some issues with gameplay. The biggest issues were the left thumbstick causing me some issues getting full steering lock on a race simulator, and the alignment of the L2 button causing me some braking issues. That being said, it didn’t take too long to adjust to the L2, but the steering continued to present me with some issues in gameplay for a couple of weeks. That feeling of comfort with any electronics comes with time as you overcome “programmed” muscle memory to come to terms with your new hardware. While I will continue to argue that the D-Pad and thumbstick could, perhaps should change positions; when it came to arcade games – the SN 30 Pro 2 stepped up. The physical design of the SN30 Pro 2 isn’t necessarily ideal for console gaming, but having that D-Pad available and in the position it is, meant that old school games were just a breeze.

In brutal honesty, this isn’t the best controller I’ve ever used and it’s not going to compete with the top end devices – but it’s not trying to. At an RRP of AU$89.00, it’s not the cheapest but it’s also far from the most expensive controller around. The touch of the buttons is great with a nice positive click to them and a progressive response to the thumbsticks and finger triggers. After making the necessary adjustments to the physical design of the controller, it is enjoyable to use. It’s lightweight and, while a little awkward at first the wireless connectivity and good range is an excellent feature. Coupled with the compatibility across such a wide range of devices, if you’re a regular but casual gamer the SN30 Pro 2 is a strong contender. It has the capability to work for just about any game you want it to and it’s a money saver as you only need one.

If you’re keen to pick one up check out the Australian distributor, Bluemouth Interactive for more details.