A little while ago, I drove Tesla’s Model 3 for a couple of days just to see what electric cars were all about; before this, I’d rarely seen one much less driven one, and to say that I was a convert after just 3 days is an understatement – I can’t wait to get my hands on one.

The issue, of course, is that Tesla doesn’t exactly make an affordable car. With a starting price around the $65k mark (and going up a lot from there depending on models and options), the Tesla range of EVs is kind of out of the average person’s price range.

With that in mind, I sought a drive in MG’s ZS EV, a SUV-shaped EV styled after a conventional SUV, with the motor and fuel system removed and replaced with electronics. It’s a car that you wouldn’t know is an EV – it’s hardly as distinctive as a Tesla – unless you heard (or rather, didn’t hear) it drive past you.

However, MG’s ZS EV is in high demand, so to start with, MG sent me a ZST Essence to drive instead to get familiar with the MG range, and I’m glad they did.

At the outset, I’m going to tell you that this isn’t a car review; the MG ZST (and, in fact, most cars) have been comprehensively reviewed by others, so I’m not going to waste my time (nor yours) going into details about the engine, its fuel efficiency and so on.

Instead, I’m going to focus on what makes it good, where I have some concerns, and what the technology inside it is like. You might think this is a little odd; after all, isn’t technology in most cars pretty standard these days? Well no, no it isn’t. What makes the MG ZST good?

In short, quite a lot. At the outset, with a $33,490 driveaway price, you might be forgiven for thinking this is a pretty standard mid-size SUV, and in some respects, perhaps you’d be right, but there’s a lot you get in an MG that – in an equivalent priced vehicle elsewhere – you don’t really see.

At this price point, you get the following inclusions as standard:

Better yet, most of these features actually work as advertised, meaning that you’re not left with something over promised and under delivered. I do say most, though …

For me, the MG Pilot feature didn’t work especially well. It was OK on a motorway, which is where it’s mostly meant to be used, but on Sydney’s generally mediocre roads, it struggled. Where there’s missing lane markings, or where they’ve worn, MG Pilot disengages pretty quickly. If there’s cracks painted over with tar (which are very reflective on a sunny day), MG Pilot is near useless, as it may inadvertently drive you into another lane.

I found the ACC (automatic cruise control) without MG Pilot enabled was very good, accurately following traffic on motorways, A roads and B roads too, and it was fairly rare that it missed a car stopping and I had to manually brake, though it did happen once or twice.

The 360 surround parking feature is handy, but it can be quite confusing for those more accustomed to parking the way we were trained to many years ago. The other wrinkle is using the feature in the dark – it’s just about impossible to see your surroundings on the cameras, making parking near impossible. I found most of the time I was turning the feature off and parking the “old fashioned” way instead. 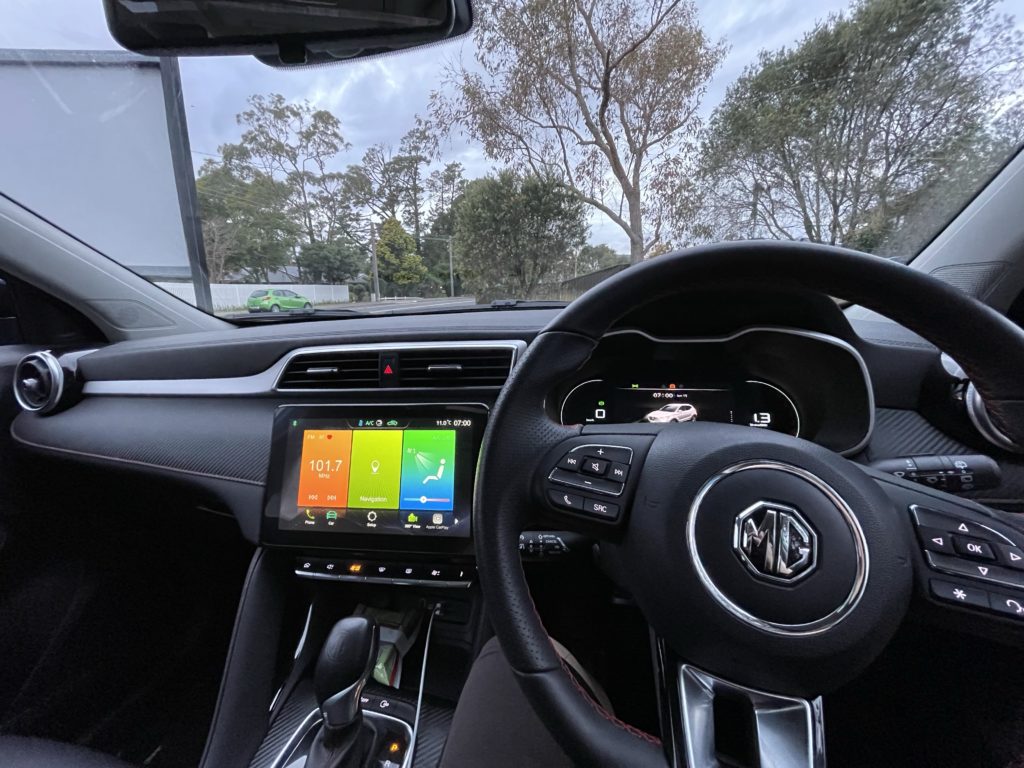 As you can see, it’s big, it’s bright, and it’s front and center. Unfortunately, though, this brings quite a few things that I complained about:

It might sound like I’m not all that happy with the technology in the MG ZST, and that would be accurate. As good as it was, it felt like a bit of a let down.

There was also one last thing, which for me was genuinely very annoying; the Bluetooth phone connection – whether by Bluetooth directly, or using the Carplay audio connection – was delayed, in some instances taking up to 3 seconds for audio to be heard on the other end (and vice versa). The best analogy I can give was how international phone calls used to be when routed via satellite with lots of audio delay.

It was just about unworkable for longer conversations, to the point I often disconnected the Bluetooth and used a headset or something instead.

It feels like something that could be fixed with a firmware update, and hopefully, it is.

I was left with some questions about the ZST’s fuel economy, as it felt a little thirsty (this, in spite of the little 1.3L turbocharged engine). Perhaps it was just me, or some challenging traffic on a few days, but it seemed to sip the fuel a little more heavily than my daily driver (a Skoda Octavia wagon). Look, I probably wouldn’t, and there’s lots of reasons besides just a couple of gripes identified above.

For one, I want my next car to be electric, and the MG ZST simply isn’t. That its fuel economy isn’t marvellous certainly doesn’t help, but it doesn’t meet that basic requirement.

Secondly, the in-car experience was a little .. unpolished. The infotainment system was slow in the wrong places, and the interior creaked and made a bit of noise in a way I haven’t experienced in recent times. It wasn’t overwhelmingly noisy, just it made a few creaks and cracks that I wouldn’t have expected, which led me to think that perhaps some parts didn’t fit together that well and had a bit of travel in them. I don’t know what it was, but it was noticeable.

Primarily, though, the reason I wouldn’t buy one is the price – and not because it’s too expensive. If anything, it definitely isn’t. Rather, at $33,490, I can get just about the same car with a nice environmentally friendly electric motor and endlessly rechargeable battery (well, until the warranty runs out at least) for about $9k more, and that’s the car I’d rather buy.

Putting aside my particular concerns, what you’re left with is a good car, representing a solid effort from MG; it’s a comfortable, suave looking mid/compact-size SUV that easily fits two adults and two kids and a boot full of crap. With features usually only found on more expensive cars – operating sun roof, leather interior, heated seats, relaxed driving feel and so on – the MG ZST is a brilliant effort from MG, it just needs a touch of polish here and there to make it really and truly shine.