I published my first review of a new-breed MG ZST a couple of weeks ago, and in the interim, I’ve been driving the next car in the review fleet, the MG ZS EV (the full electric one). This is, of course, the car I was most excited to review and my excitement was rewarded.

To say the MG ZS EV is one of the most interesting and exciting EVs on sale in Australia at the moment is an understatement; it’s the cheapest at just $43,990 drive away, and it also offers Australia’s most in-demand body shape – a mid-size sport utility vehicle (or SUV).

Does the MG ZS EV prove to be a case of “you get what you pay for”, or is it a viable alternative to the much more expensive EVs in this segment, which typically start at $65,000 or more? Well. At $43,990 driveaway, it’s as near as doesn’t matter to $20k cheaper than virtually all alternatives. Hyundai’s Kona EV is the closest match, and it’s closer to $65k on road. There are more affordable EVs around – Nissan’s Leaf is around the $50k mark (but is a much smaller car), and Hyundai’s Ioniq Electric is around the same.

Price-wise, the MG ZS EV is a stunner. For that $44k on road price, you get SUV styling, leather interiors, sun roof, space for 4-5 adults inside, a huge boot space, automatic cruise control and a wealth of safety features (which we’ve already talked about in the ZST review).

What do you get in a MG ZS EV?

Apart from the electric motor / battery – which we’ll touch on below – you get just about all the mod-cons you’d expect in a 2021 car.

There’s an 8-inch touchscreen to access aircon, entertainment and navigation options, AM/FM radio (but no DAB), Bluetooth audio, as well as Apple CarPlay and Android Auto.

It’s all pretty standard, and pretty good. My only gripes are these:

While there’s a lot of smart stuff, there’s no automatic parking assist (which some cars have had for years), and MG Pilot – which uses a combination of ACC and self-steering – does a good job of keeping you going on freeways, but it’s not much use anywhere else. It also has a tendency to behave a bit like a bowling ball with bumpers, instead of keeping you in the centre of the lane (which Tesla’s do really well).

While the exterior is fairly non-descript – it’s just a typical SUV, really – on the inside, it looks great. The faux-leather trim is a notch above, and it’s very comfortable for extended drives. There’s plenty of room for two adults in the front and two in the back, and your kids will definitely fit. The boot space is wide and very deep, meaning you can fit in a heap of gear and still have room to spare.

What’s under the hood? While it’s an EV, the similarities with most other EVs stop there. This is an EV retrofitted into an existing body shape, not an EV designed from the ground up, and if you lift the hood, you see most of the things you’d expect to see under the hood of any car. Unlike a Tesla Model 3, which has virtually nothing to see under the hood, the ZS EV has most of the fixings of a normal car.

Power-wise, there’s a single electric motor which drives the front wheels only, delivering 105kW power at peak and 353Nm of torque. Considering the weight of the car – around 1650kg with a human in it – it gets up and goes pretty damned quick, but a quick light takeoff against a Model S proved a little disappointing.

That said, there’s a 44.5 kWh battery inside (well, under the floor) and while it’s a good size for city use, this really isn’t a car for long drives for a few reasons. For one, it’s rated at around 260km per charge, but that’s if you drive in eco-mode (a pretty lazy take-off speed, heavy brake regeneration etc) and keep the air-con off. If you drive a bit more aggressively, and use the AC, that maximum range might be closer to 180-190km at best. 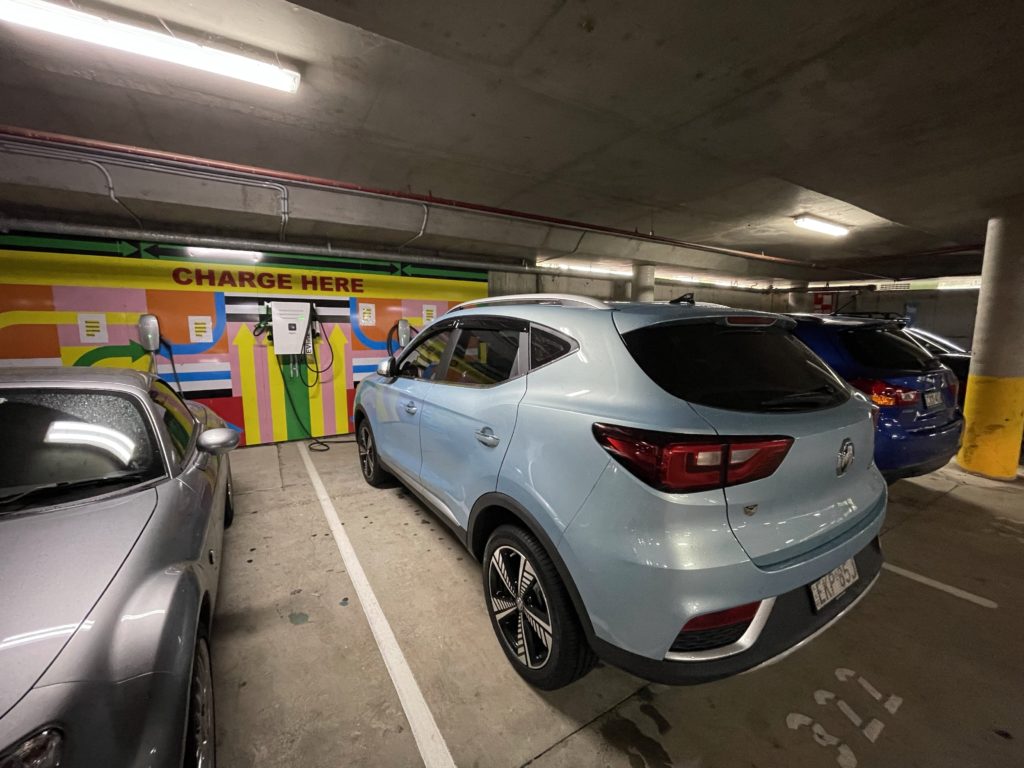 Charging the MG ZS EV is easy enough at home; the car comes with a standard 10A wall-socket charger which will half charge the car in about 12 hours. If you need faster charging, there’s a 7kW AC domestic charger option which’ll do a full charge in about 7 hours (but we’ve not tried this).

Unlike many other EVs, the ZS EV charges through the front – convenient for public chargers and charging at home, as you just drive nose-in and off you go. What’s inconvenient, though, is that the charging port is quite low, and the rubber plugs which keep it safe in wet weather are rather annoying to remove and replace, especially in the dark. Having used a few EVs now with chargers in the rear (like a typical ICE vehicle), I far prefer that overall – easier access, easier to see, and arguably a bit more convenient even if it does mean (at my place) I have to reverse down a steep driveway to get the charging port near the charger.

Unfortunately, though, the MG ZS EV only has an on-board 7kW AC charger, so even that 22kW charger will only top you up at 7kW. Better yet, the on-board charger is single-phase only, so forget installing a 3-phase wall-box for faster charging, it won’t do anything.

The other “feature” is that most Tesla destination chargers (which use a Type 2 socket) won’t work with the MG ZS EV; they need to be pulled apart and have dip-switches changed to support the MG, and that’s something that private owners will be reluctant to do, and public Tesla chargers will never offer.

This makes charging the MG ZS EV in public a little more challenging, as only some “compatible” chargers are actually compatible, and the limits on AC Charging mean that you’ll only get about 7kW AC from most public chargers. This might be a little slow to save you in a pinch – you’re looking at 7 hours for a full charge if you’re getting dangerously low.

The 50kW DC charging isn’t too bad, if you can find it – it’ll give you an 80% charge in about 45 minutes, which is fine on the go – but there aren’t many of these at all around Sydney. They’re mostly on the highways and some of them may be outside the range of the MG ZS EV in the first place.

With its somewhat limited EV range, the MG ZS EV might best be considered a city car. Sure, you could drive it down (or up) the coast, but your battery is going to be getting pretty low by the time you get there. If you can find a nice fast charger to top you up, you can turn around in an hour or so. If not, you might be waiting up to 7 hours to be able to charge up enough to get home – not ideal.

For a city car, though, the MG ZS EV is perfect. Plenty of room to fit your clan, and their gear, and plenty of pep to make the driving experience fun.

If it weren’t for the difficulty in charging in public, I would think this is close to an ideal car for a would-be EV owner. That difficulty, though, means you need to think a little more carefully about where you’re going, how far away it is, and your charging options at your destination (or on the way for longer drives). The inability to use Tesla destination chargers in particular, which are quite popular, is concerning.

In every other respect, though, the MG ZS EV is damned near perfect for its $44k drive away price, and you’d be hard pressed to do better. For those doing longer drives, though, or needing the ability to go more than 240-260 odd kilometers in one go, you might look for a car with a bigger battery.

For the city dwellers, though, the MG ZS EV is amazing, and I’d be happy to own one!

The MG ZS EV is an ideal second car. You can have a fossil which you can use for long trips. The EV also gives a family insurance against petrol shortages.

Short range, and a non-standard charging system. I think you overrated this Mao’s Garage* SUV, Chris. With those problems, I’d have only rated it as 2.5 out of 5, at most.

*The real MG was Morris Garages of Oxford.

The challenge I have is it is $20k extra to switch from ICE to Electric and that would pay for a truck load of petrol.