Home Smart Home and Wearables Around the Home Google Nest Cam (Battery) Review — Great hardware backed up by the... 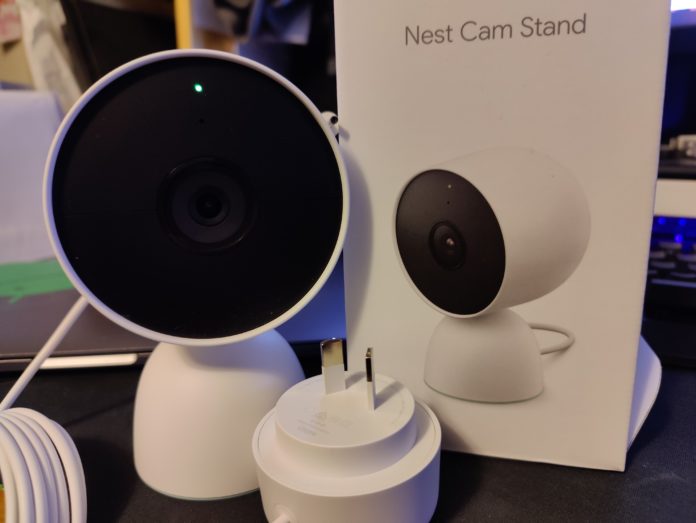 A few weeks ago, we got our first glimpse at the new home security cameras from Google. On paper, the hardware looks good and for the last couple of weeks, we’ve been testing it in the real world. There’s a lot of good things and some that haven’t been nailed this time round to discuss, lets get into it.

The design, specs and installation

If you’ve got a home security camera in recent times, you’re probably looking at a bullet-style camera or the smaller pod-style like the Ring Stick up camera. While the camera itself is similar to the bullet style, it’s physically a lot larger — 8.3 cm x 8.3 cm — and heavier at 398 grams, than others in a similar range. Inside that larger body is a lot of hardware and processing power to deliver a user experience that, at this point is market-leading and very impressive.

Google has killed two birds with one stone when it comes to the fact this particular camera is designed for indoor or outdoor use. To ensure that it can stand up to the elements, the IP54 rating and powerful mounting magnet (tested in what we recognise as destructive wind conditions) mean your camera won’t accidentally come loose. If that’s not going to meet your needs, there are a couple of other mounting options:

However, you choose to mount your camera there are a couple of charging options. The first being the cable that comes with the camera for top-up charges. The second being the weatherproof charging cable and brick, which of course, costs extra. The problem with both of these is that it’s a proprietary charging plug so other charging cables you have simply won’t work.

For Aussie buyers, like the Nest Doorbell (battery) it comes in a single colour: Snow. Not necessarily a bad thing, but the size and colour combination does make it difficult to have discrete cameras on your home. The specs deliver what everyone expects in a current generation security camera. The field of view is pretty good at 130 degrees, however, it could be a bit better to really give good coverage of an outdoor area. The 130 degrees really does make this suitable to a corner mounting, entryway or narrow pathway versus trying to get full coverage with a wider angle view.

You’ll also get a 1080p video feed with 6 x digital zoom and two way audio any time of the day or night. The video capability also includes pretty solid night vision thanks to the IR light ring.

The setup process is typically “Google” easy with the included QR code via the Home app. Once the camera is plugged in and charged, you just need to connect it to your Wi-Fi, then the feeds are automatically added to your home app and available on your Google smart screens.

Then we get to the constant battleground of many electronic devices today, the battery life. A device like this is going to have significant differences in battery life depends on use. This hinges on how busy the area you mount the camera in is, as well as how often (and how long) you stream video from the device.

The variables on this also extend to the camera settings, so if you need great battery life it’s probably worth lowering the quality of feed and length of recording after triggers just to preserve that bit more battery.

In the default settings, perched where I was capturing cars and people travelling past my driveway I was losing between 3 and 4 per cent of battery a day. This equates to roughly a month of battery life, given the fact that equates to around 50 – 60 events per day captured.

Repositioning the camera where it only captures our property, reducing the activations to a handful per day resulted in around 3 – 5 % per cent of battery consumption every week. That will result in roughly 6 months of battery life.

That’s a pretty good result in my eyes for a camera providing feed quality and on-device processing (more on this later) at this level.

Features: Freebies and Subscription based options

Google has joined the subscription train in earnest here, with some decent freebies included without a subscription. But if you want to get the best from your new device, you will need to subscribe to Nest Aware.

This isn’t the tale of two experiences that some subscription-based services offer. Without the Nest Aware subscription, you’ll still get notifications, some of them “smart” because of the onboard machine learning and processing on the camera to recognise people, vehicles and packages.

Perhaps the area that most people care about with cameras is the recording time. As an included option, the Nest Cam Battery includes the (onboard) capacity to hold three hours of event history. To be clear, this is not a constant video recording of three hours or three hours of video even history: But for three hours from an event being triggered, the video is available to view and download. More than once during testing I was caught out thinking I’d check a video “later” only to find that the three hours had expired and the video, alas, was gone. You’ve also got access to set up activity zones, which allows you to focus on or ignore certain areas of your camera’s capture areas. But you’ll have to go digging for this because the settings are several layers deep in the menu system. Once you do set it up though, you have the option to set up several zones per camera, each with its own notification settings.

These little deficits are where having a Nest Aware subscription becomes a huge value add. It costs $9 per month but, as the main point takes your storage of events from 3 hours to 30 days. This in itself is a huge bonus, but there are other bonuses to the subscription also.

Familiar faces is another bonus from the subscription which Duncan provided an overview of in his review of the Nest Doorbell recently.

One of the best features of the person detection feature is ‘familiar faces’. Using familiar faces you can teach the Nest Doorbell who anyone is and have the camera recognise them, but even cooler the doorbell announce them.

When my daughter gets home from school I get a notification, “Hannah detected”, if my mum presses the doorbell, all of the Google smart devices announce, “Linda’s at the front door”.

If you’re willing to part with the extra $3 a month, you get all of those options plus an extra 30 days (60 total) of event history and — provided your camera is on a permanent power source — 24/7 video recording.

Security and peace of mind

Data security is something that should be front of mind for all users, for any private data these days. Whether it’s passwords, bank details or video footage from around, or particularly in your home. Google has seemingly ticked every single box that is reasonable to expect when it comes to your data security.

They started by ensuring that your data is encrypted while in transit between your premises and the Google storage servers. Then, it remains encrypted on Google’s servers which are the most common points where data can be compromised: Which serves as a point of reminder to use 2FA and good password practices.

If you’re looking for a little peace of mind, but also ensuring your privacy is looked after the Nest Camera has a couple of nifty little tricks. If someone is streaming video from the device, or the camera is actively recording/processing an LED is lit on the front of the camera. Personally, I’m in two minds on this because it could be a deterrent to someone potentially wanting to enter your property, but it could also advertise where your cameras are. Either way, being a Google product you can also easily integrate it with your assistant routines. You can set the device to detect (by your mobile phone location) and record only when you’re away from home or within certain hours: The choice is entirely yours to make!

As is often the case with hardware like this, there are great selling points and sticking points. The biggest sticking point here is the relatively high cost of the hardware at $329.00, plus the subscription you need to pay if you want to get the best out of your investment plus other accessories. That, however, isn’t specific to the Nest Camera: Ring, Arlo, Eufy and Swann all have subscription services you need to pay for to get all the features – All of which are, well worth investigating if you’re not specifically desiring a Google camera system.

Everything else about the Google Nest Cam (Battery) really ticks the boxes. Setup is quick and simple with a follow the bouncing ball pathway. If you’re heavily invested in the Google Ecosystem then this really is an option you should seriously consider. If for no other reason than, it just works!

The other piece of good news is that there are multiple other options from Google either, available now if you’re talking about the doorbell ($329.00) or coming soon in the cases of the Floodlight Camera ($549.00) and Wired indoor camera ($169.00).

The Nest Cam (Battery) is an exceptionally user-friendly device, designed for versatility and to stand the test of time. It should weather extremely well and deliver a consistent user experience, which is everything you can ask from a device like this one.

Google has not requested return of the hardware