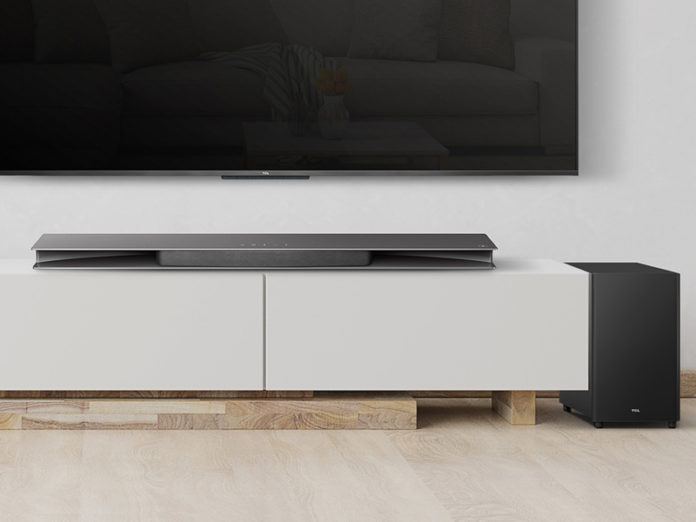 I’ve never really thought of myself as someone that would bother with a soundbar .. or really anything fancy in our media unit. We don’t watch an awful lot of television (much less movies) and so our setup is fairly basic – we’ve got an LG 65-inch TV with a Chromecast with Google TV in the back and a Foxtel iQ5 (which we’re reviewing).

It’s a very basic setup we have.

When TCL gave us the opportunity to try out a fairly simple soundbar set with our media unit, I thought “why not?” and gave it a go. Fortunately for me, this was an easy setup.

TCL’s TS9030 Dolby Atmos Soundbar (which has a bit of a mouthful of a name) is a super simple to use soundbar and subwoofer combo that suits a small media unit and – probably – a smaller room. The design is stunning, and promises something like surround sound … but doesn’t quite deliver that.

TCL’s Ray-Danz soundbar is a pretty simple, affordable affair that delivers clear, enjoyable sound with minimum fuss. While it falls a little flat in some areas, it’s a welcome addition to a media setup, especially when what you’re used to is a flatscreen TV with rear-firing speakers.

By comparison, the Ray-Danz fires sound right at you through a wave-guide style design, which promises – at least – to give you a sense of surround sound. Plugging it in is very simple; there’s a power cable and an HDMI cable, and an Optical / Toslink cable as well (though frankly you probably won’t need it). The easiest way to use the Ray-Danz is to use the HDMI connector with an HDMI-ARC plug on a compatible TV.

You can of course connect it to different things; it supports Apple Airplay and Google’s Home environments as well – which is great for casting some tunes around the place – but it does not support Amazon’s Alexa at this stage. To be honest, you’re probably not going to just cast audio to this thing, but if you do, it does sound pretty decent. For what it does, it does it rather well. The interface is stupidly simple – as noted above, the TV controls most of it, but you can also use the Ray-Danz remote if you need, and there’s buttons on top of the unit to change volume and inputs as well if you can’t find the remote (thanks, kids!)

So far as performance goes, you might think it’s a little underpowered from looking at it. The actual speaker part only takes up about half the width of the soundbar – the rest is the plastic waveguides that supposedly envelope you in sound.

This definitely gives it a distinct visual look; most soundbars look .. well .. kind of like giant bars. This looks a bit different. The subwoofer – which connects wirelessly – is easy enough to pair, and reality is you’re going to put it somewhere out of the way where you don’t really need to look at it.

The wave-guide setup does a reasonable job of bringing the sound out from being a two-dimensional affair. While it’s nowhere near as convincing as a 5.1 setup with satellite speakers behind you, it certainly does manage to bounce a bit of sound physically around you which gives the TV a little bit more presence than it sitting in the corner of the room might otherwise achieve.

With a 540W audio capacity, volume-wise you can crank this baby pretty loud; I wasn’t game to dial it up too far but it was definitely enough to have the floorboards vibrating with some chonky bass. That said, I far prefer to listen to music on a decent pair of headphones (or, earbuds at the gym) so for me at least, using a soundbar to enjoy music at home probably isn’t going to work.

As soundbars go, the TCL Ray-Danz has a very unique design, a good price tag and matching performance. It’s a great step into more advanced audio for your home entertainment, and can really bring TV, movies, sports and more to life. While it doesn’t do what multi-thousand-dollar models do, it does what it does very well. It sharpens up dialogue, gives out a decent thump for explosions and the like when bass is called for, and it’s super easy to set up – your mum or dad could probably do it without giving you a call.

TCL’s Ray-Danz can be had from $399 on sale from JB HiFi and other reputable home entertainment outlets. RRP is $499, so it pays to shop around and see what you can find.

Chris, the Interstellar soundtrack has a particularly good piece for testing bass and subwoofers. Track 22, No Time For Caution.

Good to know, I’ll try it out.