Home Smart Home and Wearables Around the Home Lenovo Duet 5 Chromebook Review – A great device that does nearly... ChromeOS has evolved so much from the basic experience (Web and Email) we saw when devices first appeared. As part of Google’s drive to become your one and only provider of data storage, the development has continued. Now with Android Apps available offering a wider install base and even Linux installation, the functionality has improved greatly. So much so, they’re a functional device to use daily for most users.

The Lenovo Duet 5 is more than just a Chromebook, it’s a tablet as well making it a very good option for media consumption.

In simple terms, the Duet 5 is a 13.3” Full HD OLED touch screen display that is bright enough to use outdoors. The specs aren’t what we’d call bleeding edge with 128GB of storage, 4GB of RAM and an estimated 15 hours of battery life. This is powered by Qualcomm chipset and GPU which goes a long way to explaining the excellent battery life.

Where the device gains flexibility is in the cover and keyboard: The cover is attached magnetically just below the USB-C ports (one either side), adding a kickstand to the device. Without this, it’s little more than a big and heavy tablet. Then you also add the keyboard in a similar way to Microsoft Surface Pros. Thinking more on this, the cover and keyboard combination is a very clever way to deliver these functions to the device. Being magnetic, if a user wants to use the device purely as a tablet: It’s easy! It also protects your Duet 5 in transit from bumps and scrapes in your bag. Personally, I really like the feel of the cover and keyboard as it’s a canvas finish. The problem, however, is the kickstand as it can make the Duet difficult to use on your lap or anywhere you don’t have a decent landing space.

Keyboards and your preferred feel are personal preferences. I tend to chop and change a bit for a variety of reasons, so a new keyboard usually isn’t a problem. What I did like about the keyboard for the Duet 5 is the touch of the keys. It feels similar to the touch of a Macbook with the soft, but definitive touch for keypresses.

WIth other devices similar to this I’ve previously used such as the original Duet and 10” tablets with keyboards, I found the keyboard to be a touch too small to comfortably touch type. As this is a 13.3-inch device, there’s more space and the keyboard size is very comfortable making it easy to use for extended periods of time. 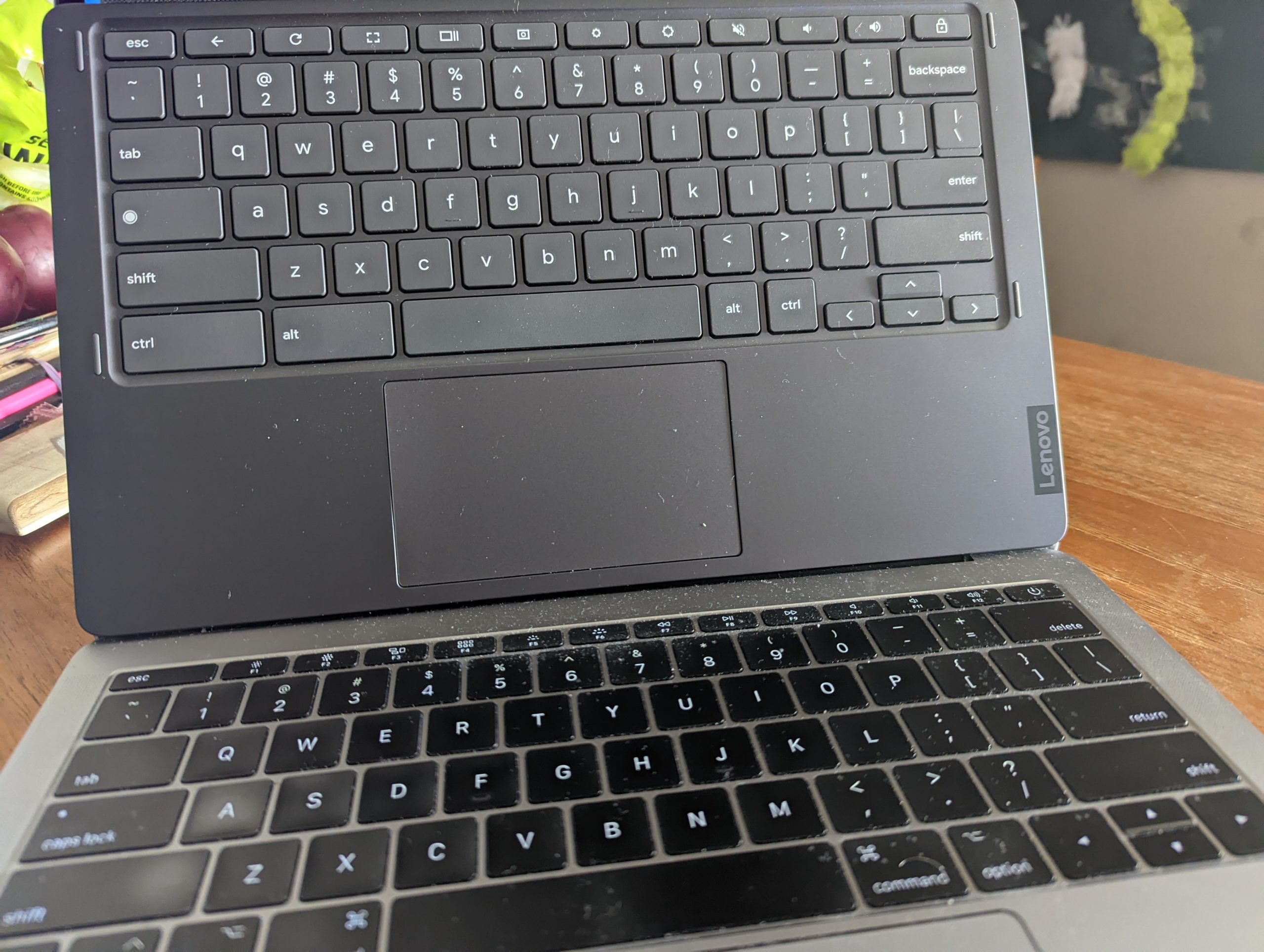 For the functionality, it would be a really nice upgrade to have the keyboard backlit but there’s a couple of barriers. The first being this would quite likely — potentially significantly — affect the battery life of the device. The second is that extras like this would almost certainly increase the cost.

We’ve already mentioned the development of ChromeOS and the addition of Android Apps. For anyone who hasn’t used a ChromeOS device for a while, having Android Apps available really does improve the functionality hugely. Although, it is worth noting that the experience you’ll have is dependent on the app being optimised for the screen size.

One area that some users may struggle with is the relatively small storage space. It won’t take much to chew up 128GB with the OS, some documents, perhaps a few Netflix downloads and general web/app caching. It’s functional, but there is just an underlying concern I have that long term it won’t be enough – so you’ll have to keep a bit of an eye on it and use other options like external storage or utilise your cloud storage.

As a daily use device, the Duet 5 performed very well for most of my needs. As a productivity tool, it easily met my needs with often dozens of Chrome tabs open, although this did affect performance, a couple of messaging apps and pretty heavy use of Google Drive. For the most part (except with > 20 tabs open) it just kept on trucking for extended periods. So much so that after a week, I was confident enough to head out with a full charge and no charger because the promised 15 hours of battery is pretty accurate. If you’re streaming media or crank up the brightness that time does drop pretty quickly though. It would be very easy to criticise the physical connectivity — or seeming lack of — on the Duet 5, but that raises two questions:

As a significant upgrade from the previous version of the Duet, and as a byproduct of significantly more internal space – there are multiple speakers of reasonable capacity internal to the Duet 5. This results in it being reasonably capable of playing audio for streaming media. When you’re dealing with speaker drivers this small, expecting bass is more than a little hopeful, but if you really want good audio – Pair it with a decent set of headphones.

This is particularly useful if you’re utilising the Duet 5 as a tablet for media consumption. Whether it’s streaming music, Netflix, Disney, YouTube or one of the many other options, the battery life is good the screen is bright and easy on the eyes while offering a responsive touch experience. Being a device that lands firmly in the Google ecosystem, all compatible apps work with Chromecast.

The behaviour of the Duet 5 changes noticeably without the keyboard attached, more like a phone. This includes gestures to access the app dock, navigation through the web, apps and of course, the Play Store.

There are a couple of cameras on the device: One front and one rear, both work but aren’t going to excite anyone. The rear-facing one is something of a potato camera, coupled with the horrendous shutter lag even though the pictures are acceptable it’s just a poor user experience.

The front camera is very useful for video meetings but not much more since the resolution is pretty low. To be brutal on this point though, who takes photos with a tablet? Particularly given the amazing quality of phone cameras available on the market.

Given my current workflow, needs, the cost of the device and generally very good experience I would. The flexibility of having a tablet or a laptop setup is fantastic and — as mentioned — the cost isn’t the $1000+ you
’ll pay for a quality Android tablet (or iPad) with a decent keyboard.

With that said, I fully recognise that some users won’t be happy with the specs of the device or functionality of ChromeOS. In my experience, with the exception of gaming, the functionality isn’t lacking but requires changes to workflow. Provided you’re prepared to make that adjustment and have consistent access to the Internet then ChromeOS with Android apps is a very good option these days

The fact that it carries a near full-sized (laptop) keyboard, it’s very comfortable to use for extended periods of time. It can then turn from a work or productivity tool into a toy for entertainment with streaming media options being plentiful and personally I feel as though the physical size and weight are near ideal.

Perhaps for some the cost, AU$799.00 at retail outlets, will be a sticking point for some with the argument you can buy a laptop for less. Yeah, probably but it will likely be low performance, low battery life device that won’t perform as well as this or have the lifespan.

This has been an overwhelmingly positive experience with well-designed hardware and the evolution of ChromeOS. If a portable device capable of operating in a productivity or entertainment environment sounds good to you, you can check one out at your local JB Hi-Fi store or online.

I think this was store dependent…
My local store didn’t get any. 🙁

Did you run many Android apps? It’s a shame we don’t get the 8GB ram version. Thought about getting an 8GB shipped from Bestbuy instead of buying 4gb here. Just for the extra specs for future proofing

We did get the 8GB of RAM model in Australia, I’ve seen it previously on the Officeworks website here Lenovo Duet 5 Chromebook Snapdragon 7180 8GB/256GB | Officeworks