Samsung has begun sending out invites for its next Galaxy Unpacked event, which is set to take place on February 27th alongside Mobile World Congress (MWC) in Barcelona.

Mobile World Congress has in the past, been one of the most important events in Samsung’s release calendar having previously announced its latest Galaxy S phones between 2014 and 2018. However, since the launch of the Samsung Galaxy S9 back in 2018, the events for its flagship Galaxy S series were moved to the stand-alone Galaxy Unpacked event. 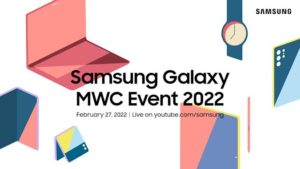 However, there is some speculation that this Galaxy Unpacked event during MWC could see the company release a new Galaxy Flip or Galaxy Fold device. Given the picture above does seem to include these devices which were announced last year.

So could we see a new Galaxy Flip and possibly a Galaxy Fold device during this unpacked event?
We shall have to wait and see and we will be bringing you all the highlights and product announcements from the event.

The Samsung Galaxy Unpacked event will be live-streamed via Samsung’s very own website and via its YouTube channel on February 25th, which will be Monday 26th February at approximately 5am AEDST, 2am Western Australian time, 4am QLD time and 4:30am SA time. If that’s a bit too early for you, check the site when you’re ready and we’ll have all the highlights.