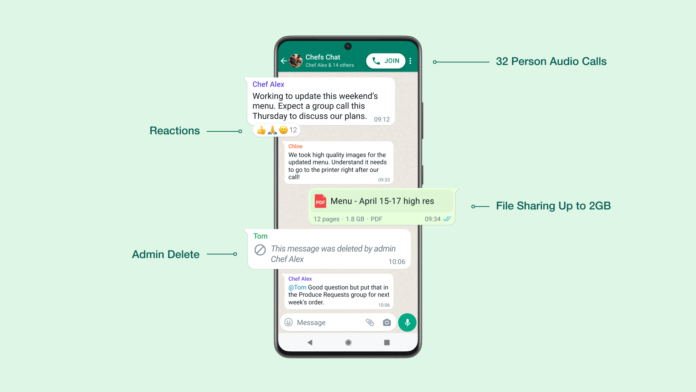 Messaging is a bit of a mess that we all just have to deal with these days. We all have friends who won’t use a certain app and disparate friendship groups. WhatsApp is set to deliver “Communities” as a new feature that could clear up some of that disparity and mess.

It’s not entirely clear exactly how the feature will roll out and the effect on existing groups. What is clear, though, is that the feature will be able to bring areas of your living under a single banner. The company has published a blog post with details of the coming feature.

Here’s where Communities comes in. Communities on WhatsApp will enable people to bring together separate groups under one umbrella with a structure that works for them. That way people can receive updates sent to the entire Community and easily organize smaller discussion groups on what matters to them. Communities will also contain powerful new tools for admins, including announcement messages that are sent to everyone and control over which groups can be included. As part of the post, there is also confirmation of extra features being rolled out that will surely entice more users over.

The changes appear to be bringing WhatsApp into line with other community based messaging options like Slack, Telegram and, to a lesser extent, Discord. Whether it will remove some of the messaging silos we’re all part of, is a question yet to be answered.

The changes won’t do anything to reduce the messaging service silos, which have been endemic since the days of the old instant messenger services.
Every provider wants you to only be in their own little walled garden, and unable to communicate to folks in any other walled garden.
Something which makes group communications easier within one walled garden, though, might get new users to join the Dark Side a competing service.