As tech junkies at Ausdroid, we are often drawn to the latest and greatest shiny things that go beep. Recently one caught my eye from G-SHOCK as a collaboration with the Hilltop Hoods. On the surface, it looks really simple and in honesty, it is but damn it’s slick!

In the simplest of terms, it’s a watch with a basic step counter in it. Of course, being 2022, it’s got an app to link to your phone and track your steps throughout the day. In a twist to the normal, “always-on” connection this requires the user to manually trigger a sync of the data. While this might seem counter-intuitive, it’s a potentially huge battery saver. With a quoted battery life of up to two years, that’s an absolute bonus.

There aren’t a heap of functions included, with simple date, dual time (300 cities worldwide), stopwatch, alarms and water resistance to 200 meters. In short, it tells the time with a few extra features and protections built-in. This is a styled twist on the G-SHOCK GBA800 bringing the Hilltop Hoods monogram and style to the device. The matte black finish to the face with purple accents and backlight looks stunning, it’s a real eye catcher.

Like many I’m sure, I’ve had watches in the past that looked great but weren’t super comfy. Generally speaking, the larger watch faces were the primary offenders too, so I did have some concerns when this arrived. Those concerns were very short lived though, because it’s far lighter than I expected and, providing you get the strap tension right, it’s very comfortable. 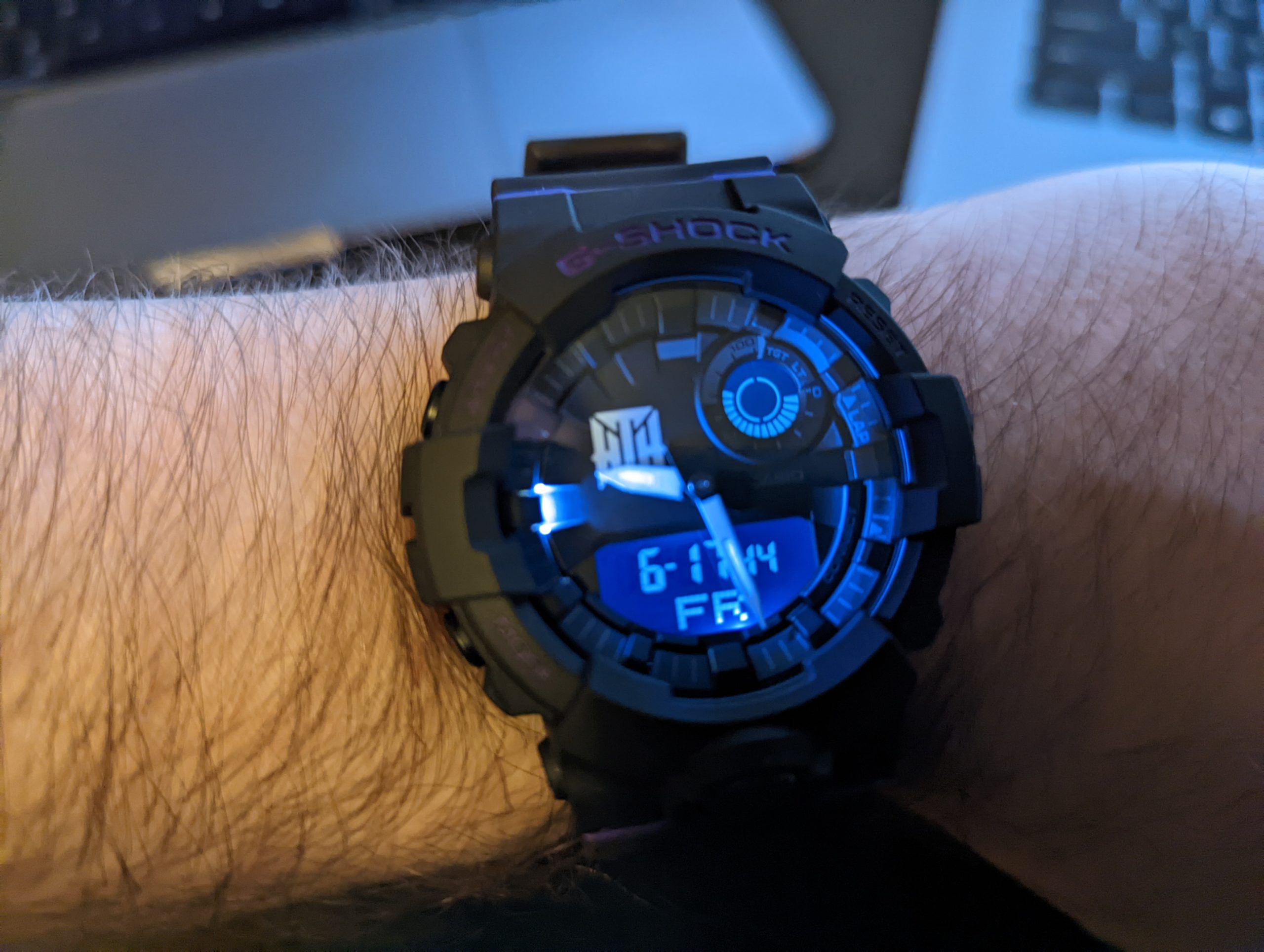 What I particularly like about this is the fact that it is such a durable device. Being an SES volunteer, I’m sometimes in situations that aren’t great for electronics. There’s potential for impact or accidental submersion and ultimately; damage to devices. Being a G-SHOCK device, it’s well and truly capable of dealing with anything I throw at it daily and even in that volunteering role.

Since this arrived, I’ve actually really enjoyed not having my wrist buzz and beep during the day. It’s surprisingly refreshing and has alleviated notification fatigue a lot. So while many who’ve adjusted to the always-connected lifestyle and like having instant access to notifications won’t enjoy such a simple, step-counting device; there are just as many who will. If this sounds and looks like a device you might like to take a closer look at, then there are a couple of options. The first is the watch alone for RRP$349.00 or you can pick up the VIP pack:

﻿The packaging features a 7″ Screen built within the box lid. The only place fans can gain access to an exclusive interview that provides an intimate look into the band’s lives and how they navigated the global pandemic all while designing their own limited edition G-SHOCK.

This isn’t a watch everyone will want in our current connected world, but if you’re looking to escape the notification barrage then it’s worth a look. I’m personally a big fan of the Hilltop Hoods and of being able to disconnect occasionally, this isn’t just a functional watch it’s a great looking one too.

Due to hygiene reasons in COVID times, the device has not been requested for return.