Android 13 is rolling out and to their credit OPPO is close behind with a version of ColorOS 13, OPPO’s customised version of Android for their phones.

We’ve had a sneak peak of ColorOS 13 Beta on a Find X5 Pro for the last few weeks. As expected when you get to the 13th version of an operating system, I found evolution not revolution. As one of the first operating systems based on the newly released Android 13, ColorOS 13 incorporates a number of key Android 13 features, while introducing a brand-new Aquamorphic Design which OPPO says offers a “concise and comfortable visual experience and user-friendly UI”.

Here are some screenshots of different parts of the ColorOS 13 interface to give you an idea what they look like:

Some of the Highlights I noticed in ColorOS 13 were:

ColorOS 13 allows users to display up to 3 windows from their phone simultaneously on their Windows PC: one for screen mirroring, and two for other apps. This function boosts productivity as it eliminates the need to switch between devices for apps. 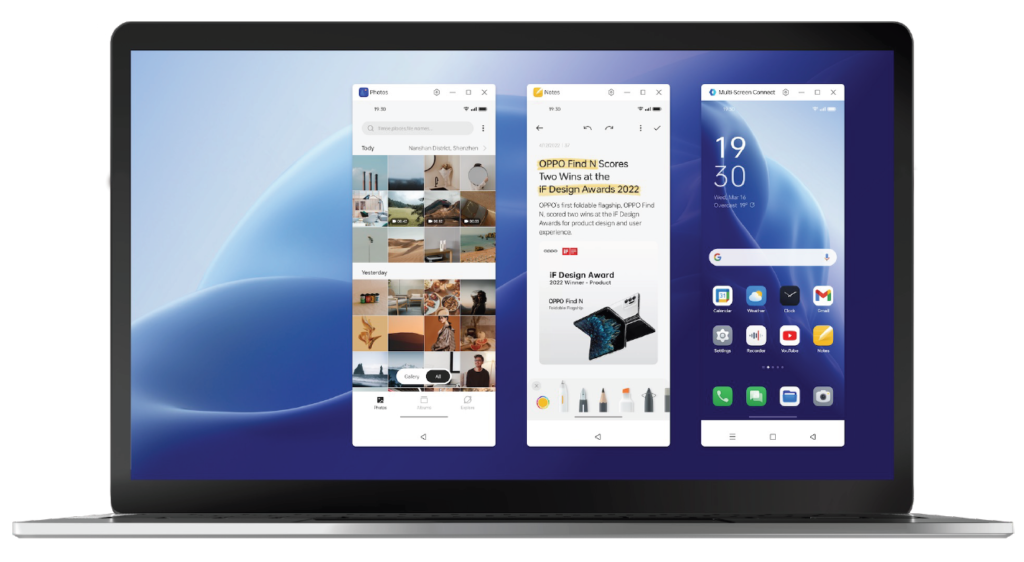 Large folders improve efficiency by allowing users to quickly open apps. Simply press and hold a folder to change the size from 1×1 to 2×2. To open an app in a Large Folder, tap it directly on the home screen without having to open the folder itself.

When you are using Google Meet, Microsoft Teams or Zoom meetings, OPPO’s self developed Meeting Assistant will bring you a better meeting experience by prioritising these data packets & switching regular banner notifications to simplified ones to reduce distractions during online meetings. The new Auto Pixelate feature blurs out avatars and nicknames in chat screenshots using 100% on-device processing. When users take a screenshot or edit the screenshot in a photo album, ColorOS will remind them to Auto Pixelate..

With one tap, the avatars and nicknames will be blurred, protecting the personal privacy of users. Auto Pixelate now supports Messenger and WhatsApp. After you pixelate the chat screenshot, you can undo or redo it at any time.

ColorOS 13 has also integrated the underlying privacy capabilities of Android 13. For example, the system will automatically delete your clipboard history after a short period of time, potentially preventing sensitive information like passwords being copied by malware. The new Blossom Wallpaper visualizes the time users spend on their phones daily through the growth of a plant shoot. The wallpaper will blossom into a plant shoot in real-time with full bloom when users hit their daily time limit for the day. After that, the plant will start to transform into a metallic piece of art if the time used exceeds your limit. Meanwhile, the colour of the plant will change to match the app used the most in the past hour.

The new optional Insight Always-On Display shows your phone usage on screen with a colour bar tracking the number of times you’ve unlocked your phone and how many hours you’ve spent on it.

Both these features encourage users to take better care of their well-being and spend more time enjoying life away from their phones.

If you’re a Spotify user there’s a new Always-On Display screen feature that let’s you play, pause, stop, or select playlists from the recommendations section. Other apps may be AOD control enabled later.

As you would expect OPPO’s most recent high end phones will get ColorOS 13 updates sent to them first, details are below: