Gaming gear is a very personal thing with every user liking slightly different features and setups. For many years, I enjoyed booming speakers in front of me while gaming. Then kids came along and I found not just a need — to avoid waking them — for a quality headset, but serenity in being more immersed in my chosen virtual world of the time.

Recently JBL released the Quantum 810 Wireless headset and following the release, approached us to review one. So, being a bit of a weekend warrior, I was happy to take on the challenge.

The JBL Quantum 810 is a hybrid connection headset, similar to the Razer Barracuda Pro we recently reviewed. It has a USB dongle to connect to your PC or laptop, while also offering Bluetooth to connect to a mobile phone.

The control software, JBL QuantumENGINE is available for Windows but that won’t stop you from connecting to a Mac or Playstation. The lighting effects on the headset are really simple to set up (on Windows) and control through the software or turn off outright which noticeably increases your battery life.

Where some devices are a hybrid type design to allow the headset to make a move from a gaming setup, into the day-to-day life of users this is a gaming headset. The microphone boom is not detachable and the look of the device is unmistakably for gaming.

The box contents are exactly what you’d expect of a gaming headset with these specs. You get the headset itself, the USB dongle to connect to your PC, a USB-C charging cable, a 3.5mm audio cable, a mic shield and some basic paperwork. The fact that the contents include a 3.5mm cable speaks further volumes of the flexibility of the headset.

I’ve already mentioned that this is a gaming headset, intended to stay at a single location. One thing that makes this clearer is the absence of a carry case. There is a neat little slip bag, but it’s not going to provide any protection from damage to your headset in transit, merely a bit of dust protection when not in use.

The Quantum 810 is a surprisingly heavy headset, weighing 418 grams. I think that will be a deterrent for some users, but I can assure you despite the weight it is comfortable.

The over-ear cups swivel horizontally and hinge vertically giving the user a huge amount of adjustability to the angle on your head. When you add to this, the headband adjustment for folk with different sized heads, there’s enough adjustment available to fit anyone.

Let’s talk about padding and material choices too, because this makes a difference to the feel of the headset in long use sessions. The padding is outstanding for comfort levels, it’s soft and moulds to your head and ears quickly. It provides a good balance to the headset — which is important given the earlier mentioned weight — and feels really nice.

What I found interesting is the leather wrap initially felt really hot, but after a couple of weeks was far more comfortable. I can only assume that as the leather softens and the surface (presumably some sort of treatment for the leather in packing and shipping) starts to wear a little.

As with any headset, the controls are very unlikely — unless it’s an upgrade of the same brand and model range — to be the same as your previous headset. I found the physical controls on the JBL Quantum 810 to be really easy to use and understand.

On the rear of the left ear cup you’ll find a number of tactile controls, from the top working down there are:

There are also ports for USB-C charging and a 3.5mm port to plug into a variety of sources if you don’t have or want to use the wireless dongle. Finally, on the right ear you’ll find the power slider and Bluetooth pairing button. It’s remarkably easy to answer, decline and hang up on calls by simply using the Bluetooth button when calls come in, or to disconnect once you’ve completed your call.

When it comes to playback, the volume and frequency response really only tell a portion of the story. In this case, it’s a great start with 95dB and 20 Hz to 20 kHz capabilities. For gamers, depth, clarity and directional awareness make a huge difference.

The sound balance is pretty good straight out of the box, but clearly ready for gaming with good highs and decent bass, but the mids are a little flat. That’s quite typical of DTS gaming headsets though and can easily be balanced by a few tweaks to the equalizer. The software equalizer is excellent too with easy-to-change settings and presets that will suit the vast majority of users with further adjustment for those that want it. 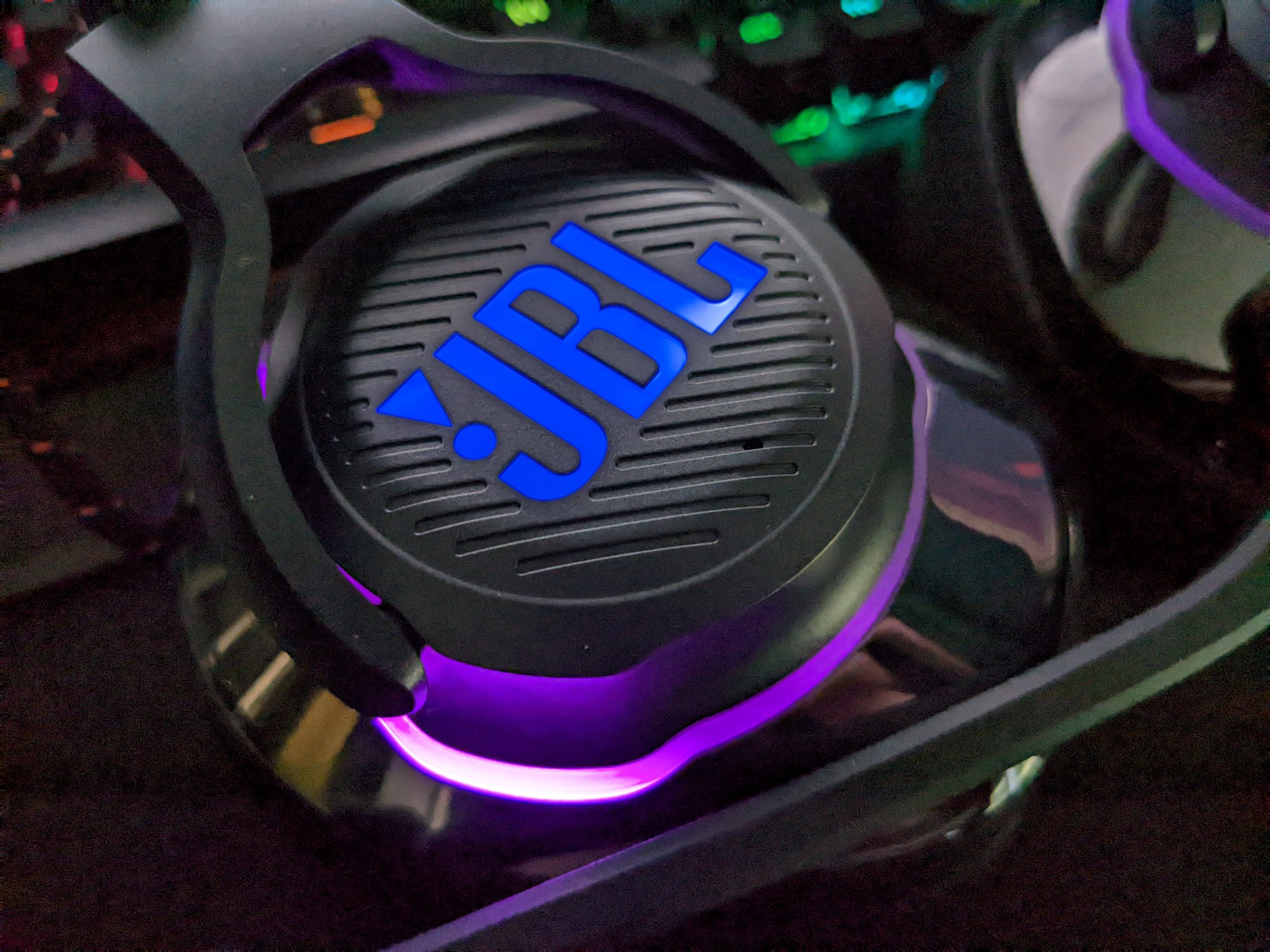 The ANC capabilities are enough to deal with some of the daily noises you’ll experience in a home environment. The background noise of air conditioners, wind and weather outside as well as some low-level noise from say… children, are going to be significantly reduced.

If you’re expecting Sony WH-1000XM4 or Bose QC45 noise cancelling levels, the results just aren’t that good and it’s not reasonable to expect given the cost and other capabilities. You’ll still have voices around you and you’ll still hear louder or more consistent noises.

For users on a Windows computer, the JBL QuantumEngine software adds an easy interface to change all the settings on your headset. From the RGB lighting to the sound balance and ANC controls, it’s all there and easy to understand.

Conclusion – This is a great value package

The presentation of the Quantum 810 is pretty clearly aimed at gamers when you look at the RGB capabilities, the weight being suited to stationary use and the wireless dongle is quite large; it’s clearly not intended to be a “mobile” headset. So it’s not in the same market as dual connection Bluetooth headsets like the Bose QC45 or Sony WH-1000XM5. It is, however, a viable option compared to the Razer Barracuda Pro if you’re wanting something a little more gaming focussed with a more outgoing aesthetic and, it’s about $90 cheaper at $349.95 RRP.

Not once during testing, did I feel let down by the battery life which is quoted at 43 hours and, as you’d expect, increases if you’re not using ANC or listening at low volume. Even if I did feel that way, you can charge and use the headset at the same time.

The important thing is audio quality and, while the default tuning won’t be to everyone’s taste it’s an excellent starting point for gaming and media playback. The QuantumENGINE software is so simple and intuitive that changing settings is a breeze and allows your headset to be that bit more versatile.

For what’s on offer, I feel like the price is in the right range and, when specials happen, it’s got potential for the JBL Quantum 810 Wireless to be really popular.

At the time of publishing this review, JB Hi-Fi, Bing Lee and the JBL Website is running a special on the Quantum 810 Wireless for $229.95