While it’s nowhere near as bad as some users are making it out to be, the battery life on the Pixel Watch isn’t great. I’m able to get a full 24 hours out of it but to be sure, I’ve personally established a routine of charging while I shower in the morning and while I prepare for bed at night.

If I forget in the morning and then head out at night, that has the potential to create a problem if I’ve had a bit day of notifications and screen time for the device. While I did test — despite the advice of the Google Support page — reverse wireless charging and it appeared to work, it won’t save you. After a couple of minutes, where the provided charger adds about 2% of charge per minute early in the charge cycle, nothing happened. After 5 minutes on reverse wireless charging, the battery percentage had, in fact, reduced by 1%, which shows the charging notification isn’t accurate.

The best recommendation I can make, at this point, is to invest in a second charger to carry with you. Particularly if you carry a power bank with you, it provides a little security blanket to ensure your investment remains functional for you, even on the longest of days.

The best recommendation I can make, at this point, is to buy a different watch. If a watch can’t even last 24 hours it’s a waste of time.

Thanks for testing so I didn’t potentially stuff up my battery in trying this Phil. 😁 Oh well, off to the Google Store I go again.

Hmmmm, maybe not. No Longer Available showing on the Google Store. 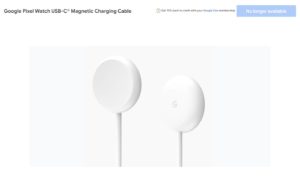